With this new play by Tom Gardiner, Cairns' JUTE Theatre has a real hit on its hands.
Glyn Davies
[This is archived content and may not display in the originally intended format.] 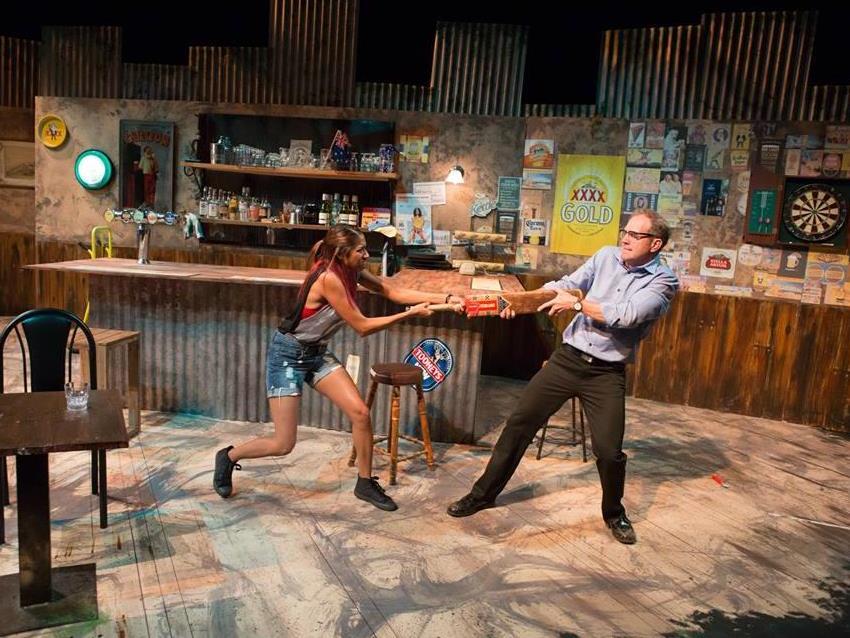 We all know the place – a rundown pub at the end of a dusty road somewhere in Far North Queensland, set between the mangroves and the township with the salty smell of the sea pervading the sultry air. It has long been a favoured location for local playwrights – and with good reason. Almost anything can happen in a lonely pub, and Tom Gardiner’s play fulfils our expectations. The audience is left guessing with every turn of the screw.

The play is a two-hander, fairly short at 75 minutes, with no interval. Laila Thaker, formerly of Cairns, is cast as the young barmaid left alone to prepare for the ten o’clock opening, while David Hynes is the traveller, the stranger, the interloper who, once he gains entry, refuses to leave. And thereby hangs a tale – one which forces the audience to grip their seats as the two characters lay bare their deepest secrets and fears in an Ibsen-like process of gradually shedding their layers of self-protection. Pre-performance publicity suggests the play has some of the qualities of a Hitchcock thriller and I would not argue with that, either. Tom Gardiner has written a modern melodrama – one that does keep you on the edge of your seat.

It is always risky to direct a new play, but I have to say that Rachel Terry handles this text with deft assurance, bringing out all the points of tension inherent in the plot, and making full use of the acting areas of the set. There is a steady, growing sense of menace in the dialogue, which Terry carefully exploits with appropriate action, lighting and music. Her two actors are as different from each other as chalk and cheese, yet each drags the audience inexorably towards the play’s horrifying climax. Well, it’s not so much the climax that is horrifying as the journey towards it. Each step on the way becomes more difficult to watch than the last. That, I guess, is the Hitchcock element. Think of Psycho and The Birds.

There is yet another resonance with the screen in this play. This kind of theatre (I have called it modern melodrama) often relies on the techniques of film and television to manipulate audience reactions. Thus it is that Guy Webster’s soundscape for The Salt Remains makes considerable use of the insistent throbbing piano accompaniment that was so much a feature of the recent BBC TV production, Broadchurch. And what an excellent choice that is, because it fits so well with the emotional thrust of the action on stage.

Jason Glenwright’s lighting design makes a parallel contribution with its sunny yellows at the start when the pub is yet to open, moving on to sickly pale greens as the sinister elements of the action come to the fore. As for Brad Reid’s set design, it is absolutely stunning. Imagine a fly-blown set of dated posters for Carlton, Fourex and the like as the backdrop to a bar with sundry bottles on a high shelf and beer taps that have broken down. In front of that, a few flimsy metal tables with cheap stackable chairs , and, stage right, a door with standard bolts to lock it and an opaque window to let the light in. It is very much a realistic set, well suited to a play with realistic, if heightened, dialogue and characters you might expect to bump into in the street.

As for the characters, what magnificent performances we get from Laila Thaker and David Hynes. Thaker, in what must be one of her initial professional engagements, plays the barmaid, Olivia, with sensitivity and boundless energy. Naïve and hesitant when questioned about her past, she shows a steely determination to defend herself in the face of increasing menace and cajolery as the play progresses. Her foul-mouthed responses are often little gems of invective, giving the audience some comic relief from the general tension. On occasion however, mainly when she is cornered by a semi-demented David, she tends to overplay the terror with a screechy, staccato delivery that leaves no room to go any further. Not a major flaw, though, in a performance that is almost worthy of some Hitchcock heroines.

From the moment he appears, Hynes is enigmatic, shifty and just a little bit menacing, and the menace grows ever stronger. His nervous laugh is totally in character and so infectious that at least one male member of the audience was heard to echo it from time to time. Mind you, there is no room left for laughs as he reveals his intentions to Olivia and begins to make demands of her that she is unwilling to obey. His range of gesture and expression is remarkable. So too his capacity to shock with a simple quip or a sudden aggressive movement. His physicality is astonishing. The performance was totally engrossing from start to finish.

JUTE has a real hit on its hands. If it doesn’t play to packed houses, I will eat my words. This is a play that will appeal not just to devoted theatregoers but to anyone who enjoys a good yarn with surprising twists and turns – anyone who likes TV dramas or thriller films, in fact. My advice is to get in early.