Chandeliers made from glowing uranium glass and an indulgent feast created entirely from salt have a quirky and seductive appeal with a political punch.
Gina Fairley
[This is archived content and may not display in the originally intended format.] 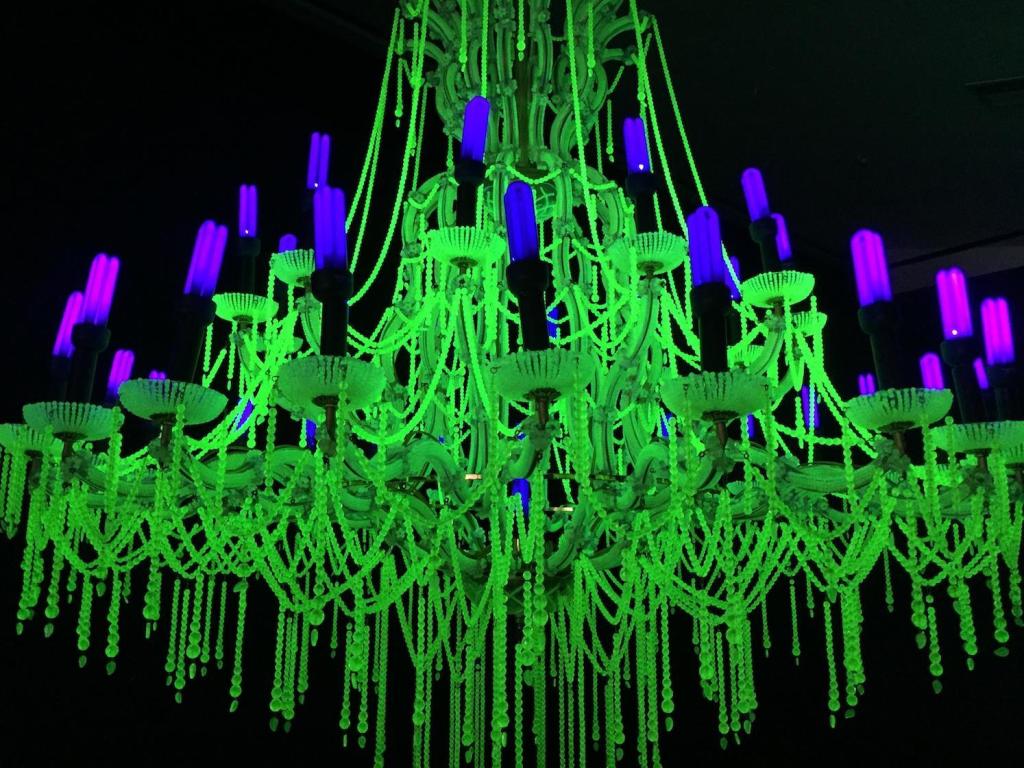 Detail of Crystal Palace: the Great Exhibition of the Works of Industry of All Nuclear Nations (2012-13) at NGA Contemporary; Photo ArtsHub.

While many may stumble across this exhibition over the holidays while walking along on the shores of Canberra’s Lake Burley Griffin, its timing leaves little to coincidence. The Last Temptation: Ken + Julia Yonetani opened at NGA Contemporary on the day that the UN Paris Climate Summit wound up, offering its own probing discussion on how we use and deplete nature’s resources.

Comprising two bodies of work – one that is constructed from groundwater salt sourced from the Murray-Darling Basin and the other of special ‘glow-in-the-dark’ uranium glass – the strength of this exhibition lies in the ideas behind these exquisitely crafted objects by the husband and wife artists.

Walking into the gallery visitors are faced with a nine-metre banquet table made from a tonne of salt, aptly titled The Last Supper (2014) and drawing upon Leonardo da Vinci’s infamous mural of the same title and a Renaissance zeal for the still life.

The artists explained: ‘Here salt is a metaphor for the death of the land, sacrificed in the production and consumption of what has become The Last Supper.’ 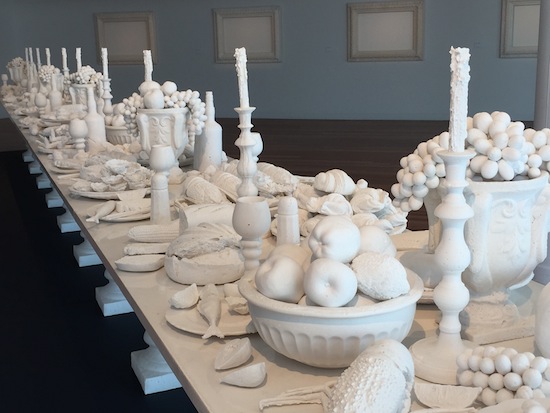 It is a fitting local conversation pairing notions of bounty with salinity and sustainability – the Murray-Darling Basin, often referred to as the food bowl of Australia, has been eroded by irrigation.

The installation offers a contemporary chapter in a global history of salt and its political implications.

While there is beauty and history in the installation, there is also wow factor. For the curious minded the question how the salt binds and holds its form perplexes and adds to the intrigue of the work.

This exhibition ticks all the interest boxes, and there is ‘something for everyone’ as the saying goes. While I loathe that expression, the breadth and depth of this work undoubtedly offers where so much contemporary art falls over.

While NGA is pitching this exhibition as the first survey of the Yonetani’s work in Australia, an earlier edition of The Last Supper was commissioned by Hazelhurst Gallery & Arts Centre and has been toured by the Museums and Galleries of NSW for the past two years.

It is shown in Canberra alongside Grape chandelier (2011) – the first in their salt series that was developed during a Synapse art-science residency at the Murray-Darling Freshwater Research Centre in 2010 playing off the wine industry of that region – and Five Senses (2011), ornate frames made from salt that sit empty.

This series again takes its cue from art history and Jan Brueghel the Elder and Peter Paul Rueben’s painting The Five Senses 1617-18 in the Prado (Spain), made during the time when agricultural developments mean increasingly lavish tables feeding Europe’s upper class.

However, the presentation feels flat in the space; washed out and stripped of its punch. There is lingering feeling, overall, that the salt works are diluted by the natural light flooding into the gallery, which effectively bleach the drama and punch of the white-on-white installation.

Similarly, the bleed of natural light to the rear darkened gallery spoils the magic and the intensity of a suite of chandeliers that rely on Ultraviolet light to activate the uranium glass from which they are constructed.

They are problems that could have been easily solved in the exhibition’s design. 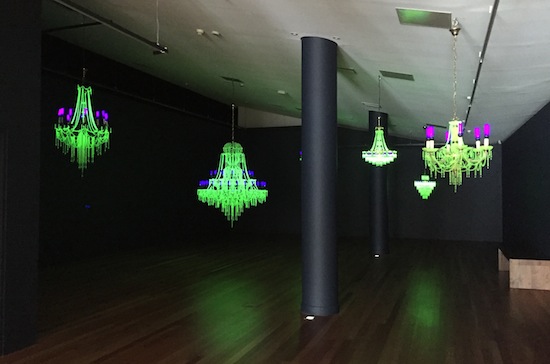 The installation was slightly effected by light bleeds; photo ArtsHub

What does work beautifully, however, is the high-octane contrast between the two bodies of work – one conceptually erased or bleached and the other punched into hi-vis intensity.

Crystal Palace: the Great Exhibition of the Works of Industry of All Nuclear Nations (2012-13) is a group nine glass chandeliers from a series of 31, first shown overseas in Singapore in 2013.

The number is significant. It symbolically equals the number the countries that operate nuclear power stations today – their size reflecting their incremental output. Of the nine on display three are the largest plants – US, France and Japan.

France (2013) is presented in the main NGA building, linking the venues.

Of significance, the series was created in response to the 2011 Fukushima Daiichi nuclear power plant accident. There is a precarious balance to a chandelier, and the metaphor of the object is a finely tuned reminder that there is a precariousness not to be ignored.

A further source was the 1851 Crystal Palace’s The Great Exhibition in London – again a lovely play by the artists on the medium of glass and opulence. The expo showcased technologies developed during the Industrial Revolution, which further ties in to the Yonetanis’ parallel questions of evolving nuclear technologies.

One of the successes of this exhibition is its duality. It is weighty with symbolism and political foundations that probe us to think – should we chose – and yet it is luscious and seductive for its material quality, enjoyed for the simple wow of technique and wizardry.