The Joy of Text

MTC: Set against a backdrop of staffroom politics, Robert Reid’s mainstage debut gets a high distinction for his satirical dissection of education and its discontents.
Liza Dezfouli
[This is archived content and may not display in the originally intended format.] 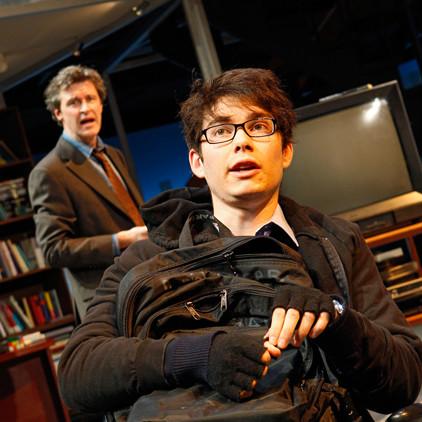 Playwright and puppeteer Robert Reid is a genuine talent. A vital force in Melbourne’s drama scene, he goes from strength to strength, confronting audiences and keeping the bastards honest, if you like. Reid’s determinedly independent theatrical journey, eschewing public funding, has now brought him to the Arts Centre with his highly regarded play, The Joy of Text.

Unashamedly intelligent, the play engages with semantics, post-modernism, deconstructionism and morality without patronising either the audience or its characters. Intellectual without being high-flown, accessible and challenging, this work is comical, timely and a whole heap of fun.

Louise Siverson is splendid as Diane, commanding the stage in a strong and physical way as a practical and ambitious English teacher with her eye on the principal’s job. Helen Christenson plays Ami, a young teacher who’s rendered vulnerable by her past, and Peter Houghton is the congenial science teacher turned acting principal who is forced to acknowledge his limits.

Inspired by a couple of literary storms in the mid-90s (namely the debacle involving the novel The Hand That Signed the Paper and the controversy accompanying Helen Garner’s The First Stone), this play looks at truth, pragmatism, pettiness, youth and age, and the politics of the school staffroom with affection and cynicism.

Daniel (James Bell) is an English teacher’s dream pupil, intellectually curious and seemingly mature, but he’s still young; young enough to let pride inform an action he justifies on intellectual grounds but which creates havoc around him. He has a particular rapport with his teachers, but as ever, the issue of how to set honest, human boundaries that ring true in a professional situation, over and above those set by the law, comes into play.

The dialogue and banter are truly enjoyable but Reid is having such a blast being clever that he lets his play down by not dropping the verbal juggling at times when dramatically, words might fail. The characters keep up a constant wisecracking, volleying and one-upmanship with language, lending the play a sarcastic distancing edge at its most serious, thus undermining one’s engagement.

Direction falls short in an early scene where Diane performs a bout of aerobics; it’s buffoonish and embarrassing; an unnecessary awkward touch, out of place amongst the rest of the production’s fine comic moments. Giving actors something to do in a play so dialogue-heavy is always a challenge and here the set proves effective, the two levels nicely creating the sense of a school environment plus allowing the actors to roam the whole space and communicate from varying levels (an opportunity strangely under-utilised, though, when it comes to creating visual metaphor).

The Joy of Text, on the whole, is terrific; a welcome inclusion in 2011’s mainstream theatre scene.