A wicked and hilarious adaptation.
Suzie Gibson
[This is archived content and may not display in the originally intended format.] 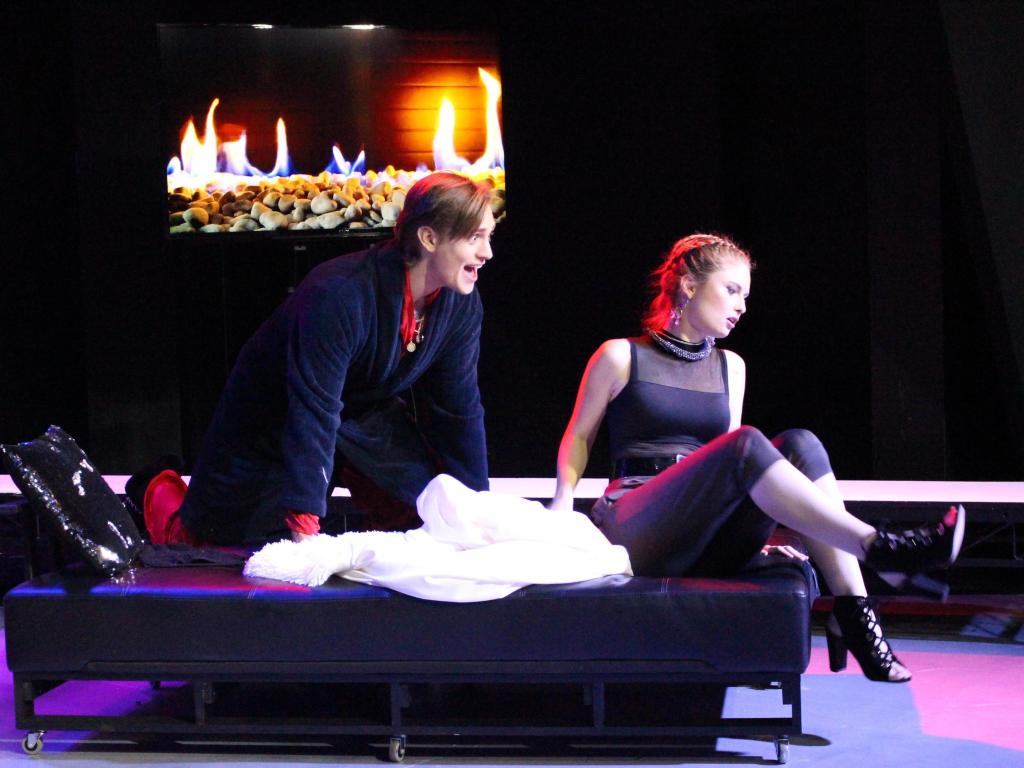 Charles Sturt University’s third year theatre/media students of 2017 have provided a wicked and hilarious adaptation of Ben Jonson’s The Fox (also known as Volpone, 1605-6). From the careful stagecraft and punchy music to the clever set design and memorable acting, this production is smart, witty and quirky. The comic timing is spot on, elevating this tawdry tale of greed and lust to dizzying heights of disarming mirth.

The titular lead is played very well by Jesse Alston; a name to remember. His ownership of the stage is immediate and arresting. We first glimpse him as a wild party-goer who dramatically collapses face down and ass up on a black shiny couch. The stage lights and set design usher all eyes toward his derrière. Our ears are also inundated with the rude sounds of his snoring. From the get-go Alston’s relaxed body exudes decadence and insouciance. As the bright white light exposes his semi-naked body we also gain insight into a carefully colour-schemed, monochrome stage. Every ornament and object matters in expressing the themes of wealth and excess.

Dual black monitors frame the stage, doubling up as mirrors. Jordon Russell’s AV Design is especially creative, using these props as a means to project images that enhance the stage design as well as propelling the narrative. When monitors reflect a bad TV reception we are cued to prepare for a swift scene change. They are also used as surveillance cameras, setting the entrance of another greedy merchant in pursuit of Volpone’s fortune.

Courtney Elizabeth’s interpretation of the elderly Corbaccio is particularly stunning as she struts her stuff in an all-white costume reeking of Sydney North Shore wealth. Her obsession with her iPad evokes the blindness of an age in the thrall of social media. The world of black mirrors encompasses both characters and audiences alike – while most had iPhones on mute, one audience member left theirs on, which made one temporarily wonder if this was another clever stage ploy.

Adam Deusien’s Director’s Notes assert that ‘today a new type of wealthy elite has risen to power on the promise of various kinds of greatness.’ We are reminded that the will to succeed – typically understood as an exclusively positive trait – often involves the manipulation or usurpation of others and is very much wedded to the values of late capitalism.

The three Fools – Castrone (Liam Jones), Nano (Abbey Bamford) and Androgyno (Rebekka Manns) – are also outstanding to the point that they threaten to overshadow the leading duo of Volpone and his servant Mosca (Hudson Emery). Their fabulous lip-sync of Dolly Parton’s famous hit ‘9 to 5’ invigorated Charles Sturt’s Ponton Theatre on a cold, late autumn night.

We are even delighted with a brief infomercial that cleverly transforms Volpone’s pseudonym ‘Scoto’ into a seductive oil: ‘just ring 1-800-Scoto’. If the word ‘scoto’ is evocative of male genitalia, well this is visually evoked, as it is used as a balm of seduction.

Director Adam Deusien expresses a rare optimism in suggesting that the Fools operate as ‘equalising mechanisms’ to injustice and suggests that we all be fools if inequality is appeased. Such sentiments are refreshing, especially in a political and social climate where extremism in all its forms – racial intolerance, excessive corporate wealth as well as terrorism and the powerful fear of it – seems to overwhelm.

There is of course a twist in the tail of this black comedy, where the fox is going to be outfoxed. But in keeping with the structure of Jacobean comedy, all that is wrong is eventually righted. It would be comforting if life could provide such neatness. Thankfully, we have art and some very artful actors, set and sound designers, dramaturges and a talented director to provide temporary escape into the riotous world of The Fox. This is an ambitious production on grand scale that it is not to be missed.