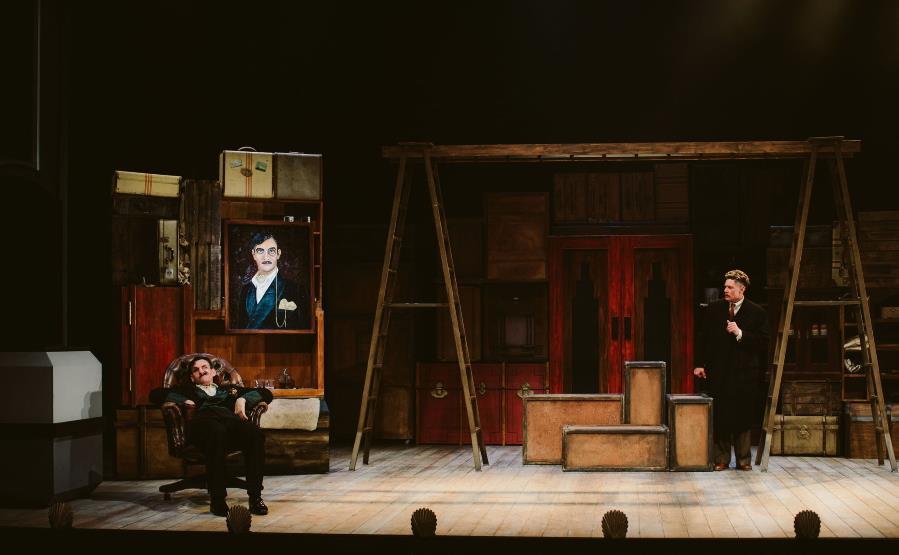 The 39 Steps needs little introduction. It began life as a very British thriller by John Buchan in 1915, became legendary as a Hitchcock film in 1935, and in recent years has done the rounds, nationally and internationally, as a very funny stage send-up. Written by British playwright Patrick Barlow, the show has played in more than 40 countries and is still touring globally.

This particular iteration was a big hit for State Theatre SA with a sell-out season in 2016. The same four actors – Nathan Page, Tim Overton, Charles Mayer, and Anna Steen – are all back, playing some 139 roles between them. (That’s what it says in the notes, but who could be sure?)

Page and Steen apparently have an easy time of it. Page plays the leading man, the bored upper class chappy Richard Hannay who gets accidentally embroiled in a spy scandal. And Steen plays a mere three roles: Annabella Schmidt, the glamorous German who gets Hannay into this mess; Margaret, a hard-working Scottish wife; and Pamela Edwards, a perfect English beauty and Hannay’s ultimate love interest. That leaves an astonishing 135 characters for Overton and Mayer to play as ‘the others’ (Mayer) and ‘the other others’ (Overton).

And play them they do, with incredible skill and impeccable timing, changing costumes, hats and accents with lightning speed. These intense pieces of physical comedy are the show’s strength and its weakness. There were just a few spots in the play, especially at the beginning of Act 2, when the director could have lifted the pace a little. But they are brilliantly bits of comedic business and the scenes on the train are especially well executed. It is a credit to the actors that they make it all look so easy – indeed, some of the scenes could be improvisations, if they weren’t done with such precision.

There is plenty to keep the audience engaged and amused, especially if you’re a Hitchcock buff and want to spot the references – and the great man himself, of course. The special effects, too, are great fun. They may not be as sophisticated as those in the recent production of North by Northwest, but they are clever and very effective. And I couldn’t review the show and not give an honourable mention to the Scotty dogs in the Highlands – a perfect comedy sequence.

The sets and costumes, by the State Theatre’s resident designer Ailsa Paterson, are excellent and really do create the right mood. The costuming for Steen is particularly impressive, clearly highlighting each individual character.

The 39 Steps sits somewhere between panto and end-of-the-pier comedy. It doffs its cap at the grand old tradition of British repertory theatre and says a brief ‘oui oui’ to that 1980s televisual delight ‘Allo ‘Allo. It is very silly, but it’s also very clever and extremely funny.