The set alone is worthy of praise, with the Opera House steps transforming into a glittering dream.
Ros Brennan 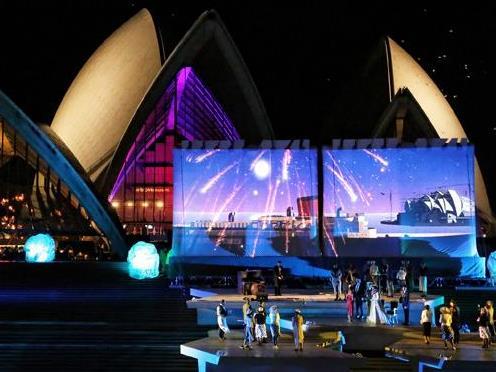 Little Ripper. You beauty. Too bloody right. These lines feel more at home in a soap opera than the opera, and yet you couldn’t help but feel a surge of patriotism as The Eighth Wonder cast ricocheted off the Opera House sails and into the night sky.

It was all part of the charm of this unconventional production by Handa Opera on Sydney Harbour, which charts the tumultuous journey of the Sydney Opera House – from its conception which traces back to 1956 in Mexico, to political debacles, public outcry, and the gruelling construction process to its eventual place as an icon in the hearts and minds of Australians and one of the most famous performing arts venues in the world.

It felt like a momentous occasion watching the story of an architectural marvel unfold on the very sight where it all took place more than forty years ago, and the dramatic irony was not lost on the audience even the seagulls were joining in the triumphant dance as they swirled and billowed around the sails.

The Eighth Wonder marks Opera Australia’s first silent opera, with the orchestra positioned in an enclosed space behind the stage and the sound transmitted to the audience through headphones, a feat not accomplished before with classical music on such a large scale. While it may not appeal to the traditionalists, the headphones made for a more intimate experience, drawing you into a cocooned world of pure sound and somehow making you feel closer to the music.

The set alone is worthy of praise, with the Opera House steps transforming into a glittering dream reverie peppered with architectural drawings, with platforms gliding across the steps and giant screens unfurling to display historic photos and animations, taking the audience to Mexico to Denmark to the Royal Yacht to a Sydney backyard.

Despite the precarious task of scaling hundreds of steps in the rain, the cast soared across the stage seamlessly – pulling off some great moments of physical theatre – with swimmers bobbing among the waves in Bondi, the glitterati revelling in the sights of Sydney Harbour on the royal yacht and a mass of construction workers rising over the horizon like a stampede emerging out of the darkness.

Alongside the turbulent journey of the opera house (which had enough twists and turns in its own right) unfolded the heart wrenching story of a promising young opera singer Alex and her overbearing husband Stephen  – who is threatened by her career and tries, unsuccessfully, to stop her from training overseas. Played by Stacey Alleaume and Michael Petruccelli, Alex and Stephen’s relationship added a very human layer to an already mesmerising plotline, and delivered some of the most magic elements of the production.

A charming family backyard Christmas with Alex’s parents Ken and Aileen, featuring a hills hoist, a tacky tinsel covered tree and a BBQ, was made even more Australian by lines such as ‘that’s bloody crook’ and ‘the heat is melting the lamingtons’. It brought about a knowing chuckle from the audience; we’ve all been in that backyard in some points of our lives.

Despite some stunning performances, The Eighth Wonder failed to reach the heights of some of the great classics and one had to question whether it would stand up if performed in a regular theatre. Certainly not an opera for the purists, the production had a higher component of acting and lyrics which came off as a little naff and lowbrow, and would more comfortably be classed as an ‘operetta’. The narrators of Heaven and Earth, who randomly interjected the storyline, floating across the stage in fairy-like costumes felt like something out of a school play, distracting and unnecessary. As thrilling as it was to experience a visual feast underneath the white sales, you were left feeling that the spectacle overshadowed the performance.

Even the Queen ironically put it that the opera ‘goes on for way too long’ which was met with a perceptive murmur from the audience. Perhaps the increasing smattering of rain was to blame, or perhaps the reflected glory of the background had worn off and the performance wasn’t making up for it. For all the spectacle and talent on show, The Eight Wonder fails to measure up to Handa’s previous productions. It had style and spectacle in spades but left something to be desired in substance.

Ros Brennan is a freelance arts writer, marketer and publicist based in Sydney. For the past eight years, Ros has worked in arts marketing in various guises, including Sydney's National Art School, the 56th Venice Biennale of Art, Artsource in Western Australia and the Perth International Arts Festival. A Young Ambassador of the Museum of Contemporary Art Australia and a self-confessed culture buff, Ros regularly attends exhibitions, theatre, film and dance and believes the arts are intrinsic to a city’s cultural vitality. Her writing features in various publications, most recently as the Art Insider for Buro 247 and Art Reviewer for ArtsHub.