Rambunctious physical performance with a strong emphasis on imagination and friendship.
Nerida Dickinson
[This is archived content and may not display in the originally intended format.] 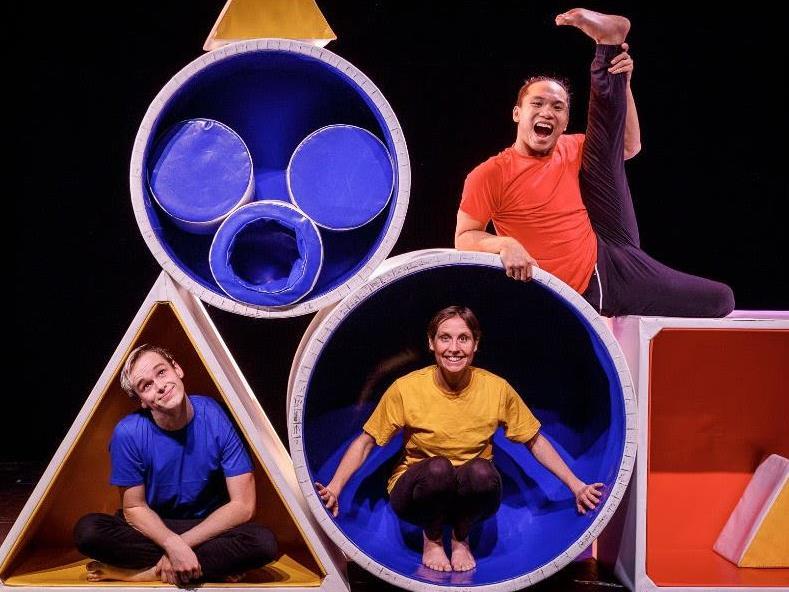 50 minutes can be a long time for many children to sit and pay attention to a stage, but Spare Parts Puppet Theatre makes the time fly past with this brightly coloured production.

Vivid colours,clear shapes, clever clowning and upbeat music combine to reflect on the big issues of childhood, play, imagination, difference and friendship. Oh, and getting caught being naughty.

A big triangle flips, moves and then grows legs and scuttles around the stage. A huge square also sprouts limbs, and their occupants gradually emerge, catch sight of each other and start playing. Their fun is interrupted by the odd arrival of a big blue circle, complete with smiling boy, rolling around the stage. The square and the triangle keep playing together, but always seem to end up picking on the circle when he tries to join in. Even when they draw pictures, the square and triangle cooperate to make a fun playground, but the circle additions turn the play equipment into little faces that join up to make a big face… that winks! Given a piece of paper each, the square and triangle people quickly fold theirs to make boats, that become hats, that then become fish tails – featuring many imaginative uses of a simple paper toy. The circle boy may not fold as cleverly as the other two, but he takes his piece of paper, and it becomes a telescope, then a rocket that takes him past the moon and to adventures in outer space! Returning to Earth he makes other toys from paper that make square and triangle want to play with him and give him a way to play with them.

The action in this performance is non-stop, high-energy – nearly all the way through. Performers are constantly engaging the attention of young audience members through clear facial expressions, physical tumbling, creative play with the simple colourful shapes and witty slapstick moves. The journey to the moon section is quietly beautiful, with puppet and performer interaction that is gentle and magical. Younger audience members may find the darker setting a little fearful if they are going through night fears, but this is offset by both the cuteness of the alien puppet and the clever use of children’s song themes in Lee Buddle’s musical accompaniment of this section.

The non-verbal nature of Sally Richardson’s creation allows audience members of all ages and abilities to comprehend the performance each at their own levels. The repeated motifs of coloured shapes in various sizes and context are delightful in their use for creative play, showing the different approaches by different children and not idealising the relationships of childhood, with different ideas being dismantled with malicious glee by Bec Bradley and Imanuel Dado! The paper folding sections also celebrate the alternatives to conforming, with the delight of imagination depicted throughout by Yvan Karlsson’s quiet, wide-eyed grin.

Splat! provides plenty of content for discussion with children over a spread of ages. Older audience members might like to consider the feelings involved with the instances of bullying, teasing, ostracism and destructive play activities. Younger children may find that the slapstick falls, bum jokes, games of hide and seek and peekaboo and creation of houses with simple shape combinations are more fascinating, but the show leaves many possibilities open for individual reflection and interpretation.

Technical highlights Andrew Lake’s tightly controlled lighting design, responding to movement cues as well as the musical accompaniment for seamless movement through scenes. However the performers’ interaction with Cecile Williams’ animation design on the cleverly integrated screen at the back of the stage is a joy to watch both as it happens and as the children respond to the magical results.

An exciting feature of this year’s winter school holiday season, this production of Splat! brings colour, laughter and movement that entertains and opens the potential for a range of conversations and learning for everyone.