A genuinely funny production that honours the inclusive values behind the popular film.
Helen Hopcroft 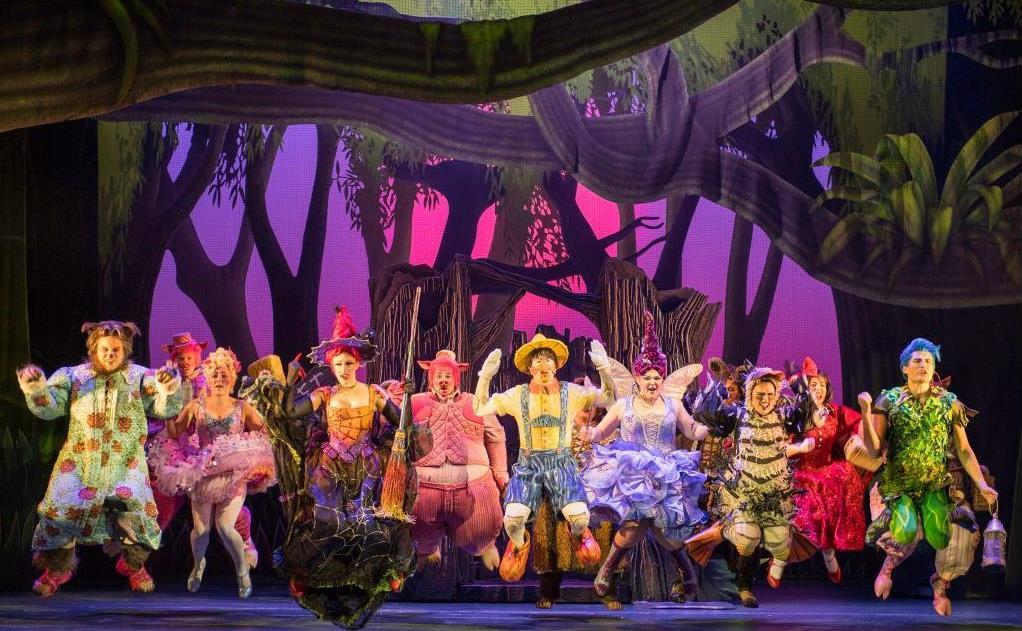 The ensemble cast of Shrek the Musical. Photo: Brian Geach.

Jokes about farts are timeless. From the get go, Shrek the Musical launches into a hilarious series of scatological gags. The usually bland mobile phone announcement warns patrons that if they don’t turn off their phones, ‘Shrek will leap into the auditorium and fart on their heads’. Later, Shrek and Princess Fiona bond over a competitive farting session, and at one point Shrek plays a skunk as if it’s an electric guitar.

There’s much to love in this production – based on the Dreamworks movie and book by William Steig – which just opened at Sydney’s Lyric Theatre. Clearly most people are familiar with the movie version, if not the book, but if not here’s a quick re-cap: Shrek is a grumpy green-skinned ogre who has been persecuted by humans and lives alone in a swamp. In the nearby town of Duloc, evil Lord Farquaad plots to marry a princess so he can become king. Farquaad hears of a princess trapped in a castle by a fire-breathing dragon, and coerces Shrek and his companion Donkey into rescuing her on his behalf. During the journey back to Duloc, Shrek and Princess Fiona fall in love, but a misunderstanding sees her marry Lord Farquaad instead. In a dramatic finale, Shrek disrupts the wedding, rescues the princess with the help of his friends, and Fiona’s true identity is revealed.

Shrek boasts predictably good performances from a stellar cast. Ben Mingay stomps and roars as the hero, managing to be genuinely moving at times, despite a thick layer of green stage paint and some fancy prosthetics. If he lacks of the brusque brutality of Mike Myers, he makes up for it with charm. Marcia Hines’s voice soars, filling the auditorium during a funky dance number involving her Dragon, and love interest, Donkey, played by Nat Jobe. (Also memorable is Hines’s purple dragon tail dress, worn during the finale). Todd McKenney’s Lord Farquaard spends most of the production on his knees, revelling in the hilarity of his role. Lucy Durack’s red-headed Princess Fiona is a treat, oscillating between neurotic and controlling behaviour, cracking jokes and strutting around like a Texan oil magnate.

Yet some of the ensemble performances are especially worthy of note. Manon Gunderson-Briggs plays the twin role of Sugar Plum Fairy and Gingy, the gingerbread man. This involves some deft footwork, as she holds up the puppet Gingy, and manipulates its mouth while dancing. There’s a great moment when Gingy, who has been tortured by Lord Farquaad, is borne off stage to a plaintiff cry of ‘that’s the way the cookie crumbles’. Rubin Matters’s green-haired Peter Pan is effervescent with joy during the closing number, and there’s a nifty scene involving the Pied Piper, Princess Fiona, and a squad of tap dancing rats. With short red hair, clipped phrasing and a full-blown Australian accent, Suzanne Steele’s Witch looks to be a sly nod to Pauline Hanson.

The set plays with the traditions of children’s book illustration and cleverly quotes some of the tropes of low-budget theatre productions. The designers have chosen to keep some elements of the set deliberately low-tech: there’s a nice scene when Donkey and Shrek walk through moving fields, in front of something that looks like a long curtain suspended on a rail, while hand held puppets – birds, butterflies and road signs – skip along above. Visual elements are deliberately two-dimensional: big cut out fluffy clouds drift past in the sky, vanishing when they hit the castle; in the forest scenes, flat trees are arranged as if the stage were a diorama. There’s visual humour in the props, too, with the kind of improvised ‘near enough is good enough’ feel you usually get in amateur theatre productions: a blow-up plastic deer cameos in a dance scene with the Princess, while Lord Farquaard rides a giant white plastic horse with the unlikely name of Black Betty.

The original Shrek movie was incredibly popular with children and adults alike. It spoke of serious issues – the misjudging of others based on their physical appearance; the way archetypal narratives, such as fairy tales, can reinforce rigid gender stereotypes; the frequent tension between expectation and reality in romance – in a language that appealed to many. It celebrated active rather than passive female heroines, and challenged conventional notions of beauty. The musical version honours these ideas, bringing the house down with some great numbers like ‘Freak Flag’ that celebrate individuality and diversity. And it’s incredibly funny, with an endless parade of visual gags, slapstick, puns, discreet dick jokes (gazing up at Lord Farquuard’s huge tower, Donkey asks Shrek ‘do you think it might be compensating for something?’), pop culture references, gym humour (Lord Farquaard miscounts his reps, while his burly spotter does most of the lifting) and, of course, fart jokes. There’s material that borders on the surreal, yet still manages to get a laugh: Donkey confesses that he ‘spent six years in solitary for impersonating a piñata’, and then mimes a stiff-legged, swinging donkey. At times the production does feel a little ingratiating, as if eager to please everyone with its smorgasbord of jokes, yet it remains a genuinely funny production.

If you’re taking kids along to this production, which I thoroughly recommend, it’s worth noting the following: the theatre has cushions that can be used as booster seats, a Candy Bar inside the auditorium itself, and a large selection of Shrek merchandise on sale in the foyer. There’s a 20-minute intermission, and just around the corner from the Lyric is Messina, a wonderful gelati place.

Melbourne from 16 February
Brisbane from 9 May