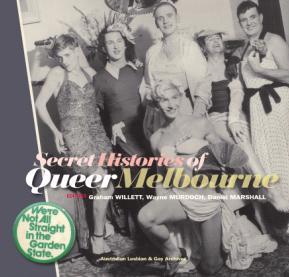 If your perception of history is that it’s the dry and dusty domain of tweedy old academics, this accessible and engaging publication from the Australian Lesbian & Gay Archives (ALGA) will surely change the way you think about the discipline.

An account of the travails and triumphs of Melbourne’s lesbian, gay, bisexual, trans and intersex – or ‘queer’ (to use the umbrella term that has grown in popularity since it was first introduced to Australia circa 1991) – community from the 18th to the 21st centuries, the book makes no claim to be a comprehensive history. Rather, as its editors acknowledge in their introduction, it is a series of ‘snapshots, fragments, vignettes’; a collage of histories told over 51 chapters, written by 12 separate authors.

Having grown out of a series of history walks presented by the ALGA at Midsumma and similar festivals, the book’s tone is accessible, concise, and distinctly non-academic despite the qualifications and careers of its various contributors. It is also immaculately researched, with an array of footnotes providing proof of the writers’ and editors’ rigorous approach to their subject.

“The history of queer Melbourne is stored in documents, in newspapers and magazines, in police and court records,” writes co-editor and author Graham Willett in one chapter of Secret Histories of Queer Melbourne, and certainly much of what we know about early queer life comes from incidents where gay or bisexual men came into contact with the law, such as the case of Yackandandah resident John Morrison, who in 1870 was sentenced to ten years hard labour for the ‘abominable crime’ of buggery. As an additional punishment, in the first six months of his sentence, Morrison was flogged three times, each time receiving 50 lashes from the cat-o’-nine tails.

Elsewhere, Willett acknowledges the difficulties of researching queer lives in periods when homosexuality was both illegal and taboo:

“When we speculate upon the sexuality and sexual identity of people who lived in times so very different to our own, we are always on uncertain ground. Unless they are caught in the act, or write about themselves in unambiguous ways, we are forced to try harder to find our way into their lives.”

The authors of Secret Histories of Queer Melbourne have clearly tried very hard indeed, and with considerable success.

From the fascinating account of bushranger Captain Moonlite (after his lover James Nesbitt was killed in a police shootout, Moonlite ‘wept over him like a child, laid his head upon his breast and kissed him passionately’ and later, throughout his trial, wore a ring on his finger made of a lock of Nesbitt’s hair) through to the flappers and ‘fast women’ of the Roaring Twenties (such as the trail-blazing Alice Anderson, who opened an all-women’s garage in Kew in 1919); from secretive wartime romances, and nocturnal assignations in Melbourne’s parks and laneways interrupted by the police, through to the gay pride movement of the 1970s and the AIDS activists of the early 1990s, three centuries of queer life are detailed, explored and entertainingly speculated upon.

The book is not without its faults – for instance, Michael Connors’ chapter on AIDS activist group ACT-UP describes the group’s 1991 ‘D-Day’ campaign (which saw the St Kilda Road floral clock deflowered in a late night raid in which the blooms were replaced with small crosses signifying the deaths of people with HIV/AIDS due to government inaction) as a ‘masterpiece of media activism’, when in reality the ensuing media storm caused the group to fracture under the pressure and blame the floral clock attack as the work of rogue elements – but overall it is an fascinating, detailed, and rewarding study of queer life in the Victorian capital.