Ruhe: the Nazi within

SYDNEY FESTIVAL: Celebrated Belgian director Josse De Pauw conceived Ruhe from a handful of potent ingredients.
Boris Kelly
[This is archived content and may not display in the originally intended format.] 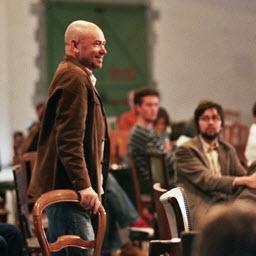 De Pauw mixes the Schubert lieder with documentary monologues based on material drawn from Armando and Hans Sleutelaar’s De SS’ers, in which Dutch former members of the SS speak about their collaboration with the Nazis in World War 2.

This juxtaposition of sublime German culture and the banality of evil are at the heart of De Pauw’s vision. Designer Herman Sorgeloos simply places two hundred hand-picked, second hand chairs in the grand open space of The Great Hall. As the audience take their seats the singers rise from among us, standing on their chairs, dressed in plain street clothes, to begin the Schubert recital. The quiet power of the music lulls us into a heightened state of listening in which a sigh, the call of a bird, the faint hum of traffic and the shift of restless feet, randomly contaminate the purity of the singing.

The meditative mood is broken by the voice of a woman, speaking directly to us in English, recounting her experiences working in a hospital for amputees. With genuine affection, she recalls a visit to the hospital by Heinrich Himmler whom, she says, was always a perfect gentleman, impeccably presented and very much admired by the nurses. She cannot recall a single instance in which he was not polite and caring in his dealings with hospital staff and patients.

The spoken text derives from an interview conducted in the 1960s. It is a wonderfully alienating twist and one that Bertolt Brecht would have appreciated, just as he would have appreciated the monologue which follows some time later in the performance when a male actor vigorously expounds upon the admirable tenets of National Socialism.

We are reminded that the Nazi Party’s political philosophy was essentially populist. The combination of jingoistic nationalism with egalitarian notions of socialism was designed to appeal the mass of German people and to steer the public mind away from the encroachment of Russian communism. Hitler’s condemnation of vulgar, ‘degenerate’ art and the promotion of high moral values are applauded passionately by the narrator, who goes on to explain, in one of those “I am not a racist but…” arguments, the merits of racial purity and the historical loathing of Jews throughout the world. National Socialism was after all, he asserts, about fairness and the reasonable distribution of wealth according to genuine merit. The Nazi equivalent of the ‘fair go’.

And again the singers rise from amongst us on their chairs to deliver the achingly beautiful music.

The German word ruhe means “quiet” and is the title of one of the Schubert lieder and also the title of the final song in the performance composed by Annelies Van Parys sung in the final part of the performance. The singers, still singing the Schubert Ruhe, gradually move to the stage (yes, there is one after all) and take up their positions behind lit music stands as if in a conventional recital.

A large projection of a black and white photograph provides a visual foil to Van Parys’s haunting music. The image is A Dutch pastoral scene taken from a postcard, probably from the period under examination, in which we see an open dirt road, a windmill and a couple of static figures in the mid ground looking toward the camera. A very large tree occupies most of the visual field and, although everything else in the photo is immobile, the leaves of the giant tree shift gently in a breeze. Like the rest of this production, the image is simple and utterly profound.

Good theatre directors understand that, in the end, a performance stands or falls on the emotional and intellectual residue it leaves with its audience. De Pauw maintains that there is no political line being taken in this production but Ruhe left me in a state of reflective but uneasy quiet, like the tree.

It was Australia Day and everywhere I looked during the day were reflections of the flag – on cars, beaches, thongs, hats, clothing – as people celebrated our collective good fortune. As I drove home from the theatre, I thought about the Cronulla riots and Alan Jones, about boat people and the collapse of global capital, about Indian students being attacked in what the media reports are not racially motivated assaults. I thought about scapegoats. How ‘good’ people can so easily sign up for evil and explain it away.

Boris Kelly is a Sydney-based writer.