A brilliant musical realisation of a deeply moving tragedy if in a very peculiar interpretation.
David Barmby 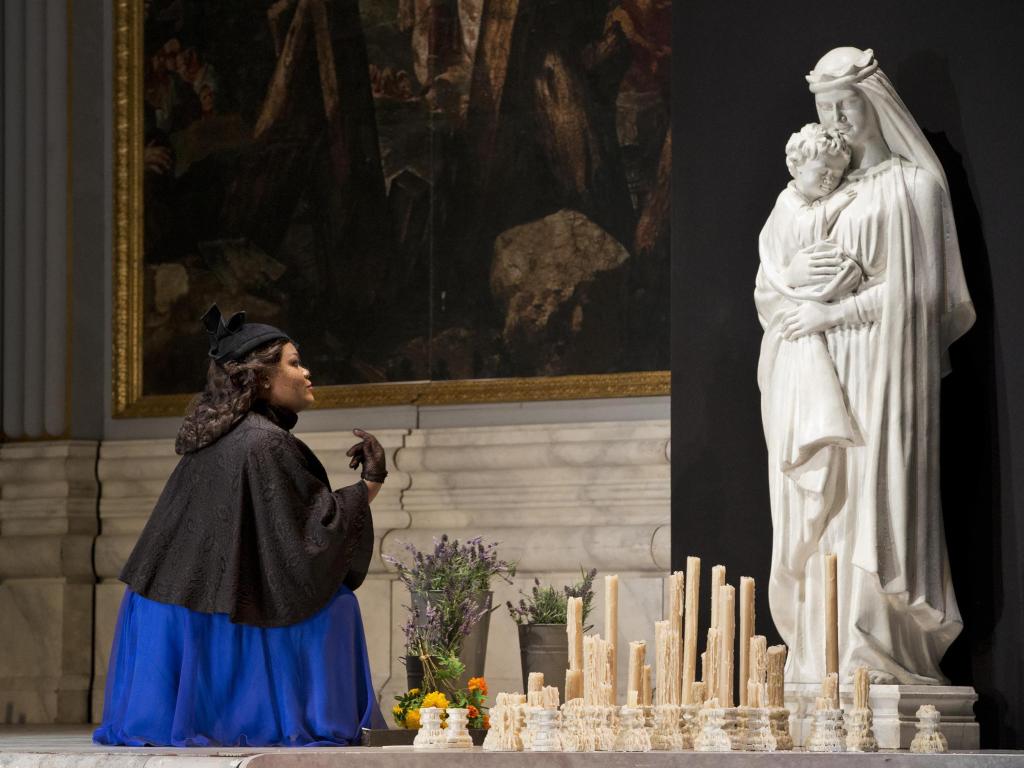 Latonia Moore as Tosca in Opera Australia’s 2018 production of Tosca at the Melbourne Arts Centre. Photo by Jeff Busby.

Giacomo Puccini’s verismo operatic drama, with an Italian libretto by Luigi Illica and Giuseppe Giacosa based on Victorien Sardou’s 1887 play La Tosca written for Sarah Bernhardt, was first performed in January 1900, delayed by a day owing to political unrest.

Texan soprano Latonia Moore was magnificent as Floria Tosca. Her impressively powerful voice with effortless range displayed a richness of character from start till finish. From what I have read of her already impressive career, Tuesday night’s opening may have been the first time she has sung this role. She is a fiery actor, tellingly conveying the bitter tragedy of Tosca’s plight in Acts 2 and 3. I was less convinced by a sense of mild flippancy and petulance in Act 1 that seemed unnecessary to the role.  But her Vissi d’arte in Act 2 was heart-breaking and splendidly realised, especially given that she was directed to kneel throughout its rendition.  Her E avanti a lui tremava tutta Roma! that may remind us of Turandot’s Si! La speranza che delude sempre! might have been more vicious.

The night also belonged to baritone Marco Vratogna as Scarpia.Though very experienced in the role, this was his debut for Opera Australia. In a role that we have heard shouted rather than sung, his voice is grand, refined, fresh and expressive. Evil to the core, he presented as terrifyingly brutal yet still managed to subtly convey, albeit briefly, a true sense of tenderness and affection for Tosca along with his lust-driven impatience and dominating mania. The intense chemistry of these two characters was strikingly potent throughout.

Tenor Diego Torre, one of Opera Australia’s favourite artists and experienced in the role of Mario Cavaradossi also had a fine night. His opening romanza Recondita armonia with sustained high B flat in Act 1 and E lucevan le stele in Act 3 an agonised farewell to love and to life were most moving, the latter tenderly accompanied by Paul Champion, clarinet. Gennadi Dubinsky as Cesare Angelotti (his debut in this role for Opera Australia) and Luke Gabbedy as the world-weary Sacristan were both in excellent voice and most effective in their respective roles, the latter’s feigned influenza an effective inclusion. Benjamin Rasheed, Michael Honeyman, and Tom Hamilton performed with distinction as the dutiful police agents Spoletta and Sciarrone, and the Jailer.  As usual, the Opera Australia Chorus was in outstanding form prepared by its excellent chorus master Anthony Hunt, and on this occasion joined by the infectious, bright-eyed keenness, and impressive acting skills of the Children’s Chorus, the shepherd boy’s song well sung by Harry Hendel.

There is much to celebrate in John Bell’s 2013 production. The acting in this performance (Hugh Halliday, revival director) was a highlight with stirring dramatic interaction between all of the principal roles, along with strongly powerful scenes such as Scarpia’s cruel insistence on Tosca’s submission to his lust, and his death by stabbing in Act 2, with Tosca tossing a banner over his corpse. What was disturbing, however, was Bell’s transformation of the work to Nazi-occupied and Fascist-ruled Rome in 1943 from the original setting in 1800 when the city was exposed to both French invasion under Napoleon while under the rule of the Kingdom of Naples. Puccini portrays the city he loved as being as beautiful and vulnerable to harm and attack as Tosca herself by specifically setting the work in three of Rome’s most striking buildings: the church of Sant’Andrea della Valle, the Palazzo Farnese and the ancient Castel Sant’Angelo originally constructed as a mausoleum for the Roman Emperor Hadrian sited on the banks of the Tiber.  By transporting the opera into a contemporary context, these important architectural, symbolic and aesthetic elements were almost entirely abandoned.

The Act 1 set was impressive, with a striking Baroque interior in pale blue, gold leaf and marble, yet in Act 2 we were met with the grim monotones and sterile angularity of a Nazi Chancellery. But it was Act 3 that really dismayed: here, evoked by the orchestral prelude, the composer imagines dawn in his beloved Rome with blissful birdsong and sheep bells accompanying a shepherd boy innocently singing in stark contrast to the violence that is about to occur. Instead, we are provided a bleak night in a grimy concentration camp, complete with barbed wire, Stalag downlighting and Fascist Italiana architectural references.  And sadly, almost predictably, there were Jewish prisoners marked with the yellow star, along with the shepherd boy whose joyful and naïve song was now transformed within this morbid context into a kind of predestined lament. The Act 1 liturgy, with Catholic clergy inexplicably joined by Nazi soldiers waving flags marked with the swastika emblem in the Te Deum Laudamuswas clumsy and gratuitous. This, capped off with a triumphant Nazi salute at the close of Act 1 and especially the misconceived concentration camp of Act 3, was an alien element to the intent of the composition.  But surely it was also nonsensical.  What are we to make of Cavaradossi’s Vittoria! Vittoria! announcing the victory of the advancing French army’s short-lived triumph in the Battle of Marengo that might have delighted Sardou’s Fin de siècle French audiences?  What possible historical relevance does this have here? Tosca shot by almost comic Nazi soldiers and thus robbing the plot of her heroic choice, was a further unwelcome invasion of the work’s integrity.

Michael Scott-Mitchell’s sets were impressive despite the concerns I have articulated above. Costumes by Teresa Negroponte were generally good though Latonia Moore’s gowns seemed at odds with the necessary dignity of her character.  A long-time collaborator with both John Bell and Michael Scott-Mitchell, Nick Schlieper’s lighting was vivid and sensitive to the intent of the production.

Orchestra Victoria’s performance (cheered by the audience before Act 3 commenced) was brilliant under the expressive, ebullient and efficient direction of 30-year-old, Verona-born conductor Andrea Battistoni. This music is evidently in his blood and I have rarely experienced such sustainedly enthusiastic and effective direction of Puccini’s music.