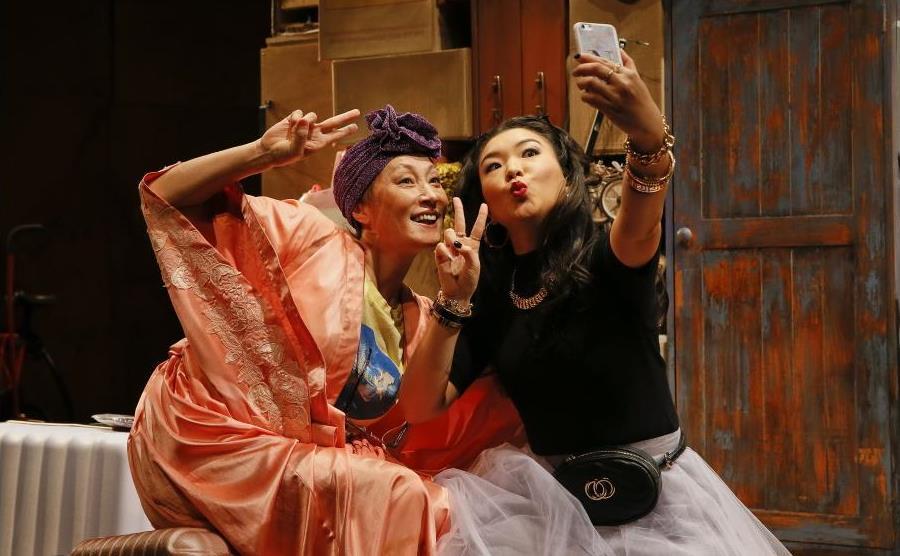 Hoarding is often the subject of revulsion and fascination in popular media, and though there have been some notable sympathetic portrayals, such as Sarah Krasnostein’s The Trauma Cleaner, most often hoarders are the butt of the joke. Here, veteran writer and debut playwright Benjamin Law lovingly balances comedy and compassion in his tale of a Cantonese Queenslander family who are coming undone beneath a heaving mass of stuff.

Diana Lin (who recently impressed audiences worldwide in Lulu Wang’s The Farewell) plays a single mum of three adult kids: the responsible, long-suffering eldest Teresa (Fiona Choi); Mum’s favourite, the glamorous social media influencer Natalie (Michelle Lim Davidson); and youngest Toby (Charles Wu), a gangly gay leftist. The three kids, and Teresa’s partner Paul (Max Brown), descend upon Mum’s bursting-at-the-seams suburban house to celebrate her 60th birthday – and to stage an intervention. As they attempt to sift through the muck of their lives, all sorts of memories, secrets, and scars bubble to the surface.

It’s a classic sitcom set-up, and a fast-paced script with plenty of jokes makes the 90 minutes whizz by. The characters feel both outrageous yet believable, with details that colour in their relationships: for example, Mum often switches to Cantonese for her more damning asides, leaving Teresa to translate for her younger siblings, who are less fluent. Teresa’s role as proxy parent and intermediary between cultures – she’s the one fielding Mum’s letters from the local council and notes from racist neighbours – will ring true for a lot of migrant families, though Choi’s performance can be somewhat one-note, leaning too heavily into the character’s air of exasperated responsibility. She’s much stronger as Ben’s mum, Jenny, in Law’s television comedy The Family Law, where she brings flair to the zany aspects of the role.

Lin shines as the mother, capturing the fine tension between warmth and harshness that some mums bring. ‘Your sister has a geriatric womb,’ she remarks casually at one point. ‘Of course she can pronounce that,’ responds a hurt Teresa, who has been struggling to conceive. There’s a beautiful dynamic between the ensemble that catches both the light and dark of being a family, and Law’s writing is sharpest when he pours you a tearjerker then chases it with a shot of laughter.

There were also some rough patches, however, at least on opening night: some parts of the dialogue feel cluttered, and others abrupt, and at times the cast seem to have too little to do with their bodies. Isabel Hudson’s teetering, towering set, staged on a revolve, perfectly illustrates the way that the past just piles up on you, but often the actors seem to be arranged in a tableau without really interacting with the set. I did wonder if the stiff physicality was the result of a team who have worked more on screen than on stage, and I couldn’t help but compare the play to Nakkiah Lui’s Black Is the New White, another Australian family dramedy presented by MTC that drew on some of the same intergenerational references but which felt more elegant and resolved.

Nonetheless, Torch the Place is ultimately a very likeable work that will make you laugh, cry, and call your mum, and that’s quite a lot already for one night at the theatre.