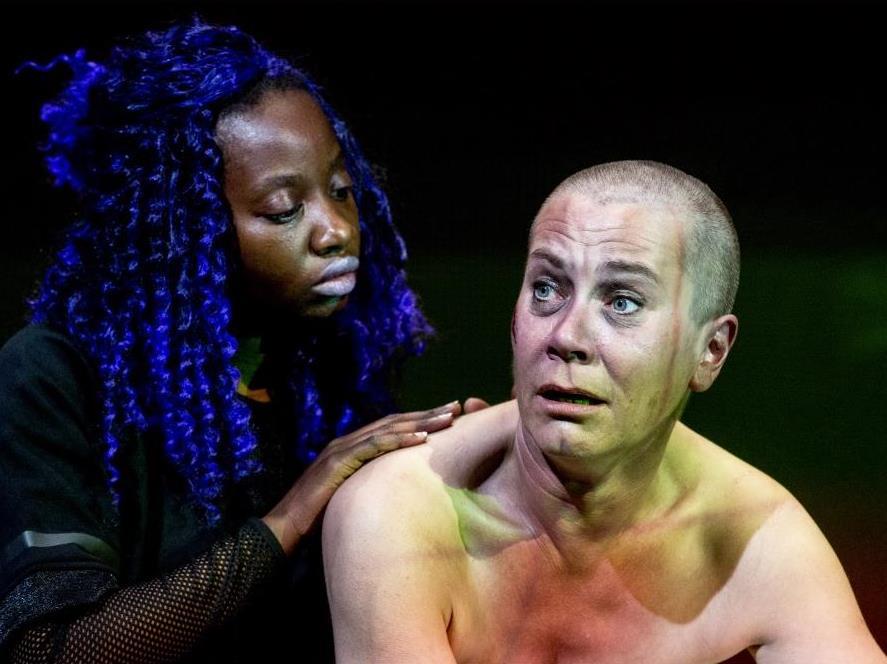 This stunning, gory, and eerily beautiful Titus seemed over far too quickly: was this oneiric fray really two hours’ traffic? Titus loses 21 sons before the action even begins. Cut to: Titus arriving back in Rome with Tamora, Queen of the Goths, as his prisoner. He immediately sacrifices one of Tamora’s sons. Aaron, Tamora’s lover, begins to plot revenge. The people want Titus for emperor, but he refuses. The new emperor wants to marry Titus’s daughter, Lavinia, but she is betrothed to the emperor’s brother. After Shakespeare sets them up, he gets to work knocking them down.

Director Adena Jacobs notes that ‘bodies and voices usually at the margins of the play are at the centre of our exploration.’ This philosophy is reflected in the set design by Eugyeene Teh, which at times is a great shuddering and twisting wall of flesh, and also in quiet moments, when the action is almost decontextualized, and we hear only the beating of a heart and a voice in the hot but calm centre of a storm of mesmerising violence.

The actors speak rhythmically and lyrically, clearly in relationship with the music diffusing stealthily into the scenes of anguish: it is a moving effect with credit to composer and sound designer Max Lyandvert and voice coach Jess Chambers. I thought of the reports of Gielgud’s generation almost singing the verse.

This production ‘queers and redreams’ Titus. It features plenty of cross-gender casting – always a welcome device for encouraging audiences to question gender assumptions. Jacobs writes, ‘The belief that we are doomed to repeat cycles of violence is a patriarchal one.’ She describes the ‘shell-shocked landscape’ of Titus. The charred manikins and sense of vast barren space (with plenty of moonscape shadows by lighting and projection designer Verity Hampson) might have been inspired by the scenes we see emerging from Syria.

Actor Jane Montgomery Griffiths, as Titus, is a vulnerable powerhouse, always teetering on the edge of despair and clawing her way back into action via revenge/justice; a real pleasure to witness. Tariro Mavondo as Aaron infused her dialogue with an effervescent delight that was about as far from phoning it in as I’ve seen. Jayna Patel (Lavinia, Ensemble) displays a winning quality that drew me to sympathise with their plight.

Fans of Titus will not want to miss Jacobs’ gripping production. To the uninitiated: Titus Andronicus is about as extreme as depictions of violence can be while remaining in the realm of art. This is a line Jacobs at times makes explicit by referencing other modes of expression with the use of surtitles. She notes that Shakespeare turns ‘violence into poetry’. Gill Perkins (Bell Shakespeare executive director) and Peter Evans (Bell artistic director) write that they can only stage Titus ‘when the time is right.’ Let Shakespeare take you into this hell on earth, a reality known too well in parts of the modern world.