The Irresistible is a stylish sci-fi thriller that has you on the edge of your seat.
Kath Melbourne
[This is archived content and may not display in the originally intended format.] 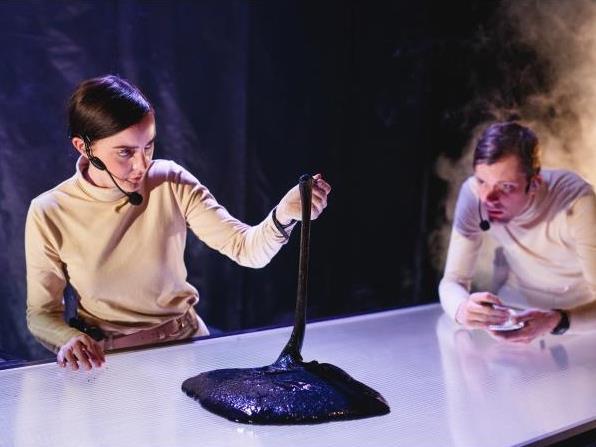 The Irresistible is a stylish sci-fi thriller that has you on the edge of your seat. Part Scully and Mulder, part Twin Peaks and every bit as thrilling as Close Encounters of the Third Kind. The 2018 Helpmann Award Nominee for Best Play, Sidepony Productions and The Last Great Hunt’s The Irresistible takes you on a journey that zig-zags across multiple interrelated narratives as the two actors cleverly shift from one character to another.

Jonathon Oxlade’s design for this performance is a shining star. It’s a magical world that fills with fog, inhabited by two performers clad in the simplest of neutral costumes, further enabling them to jump seamlessly from one character to the next. Richard Vabre’s lighting is equally brilliant.

Director Zoe Pepper draws us into the sometimes funny and disturbingly creepy world of the play. Through voice distortion and subtly partitioned stage worlds, we follow a multitude of characters through their unravelling of desire, masculinity, depravity and fear.

The two actors Adriane Daff and Tim Watts are fantastic. Their ability to morph into a diverse cast of characters is impressive. One moment they are the creepy little girl with an obsession with aliens, and the next an overblown arrogant lawyer in a strip club. The dialogue in the strip club is simultaneously uncomfortable and darkly funny and it brings to light an ugly character. The scenes between him and dancer Neve are superbly crafted as he switches from amorous intent to violent rebuttal when his advances are met with Neve telling him ‘this is my job, nothing more’.

These are absorbing characters, even if you are sometimes lost in the fog of the quickening pace of the work as it hurtles towards its inevitable conclusion. You have to be quick to keep up with this work: its narrative, while somewhat linear, transverses rapidly across character and storyline.