Life getting messy doesn’t begin to capture this web of intrigue.
Melinda Keyte 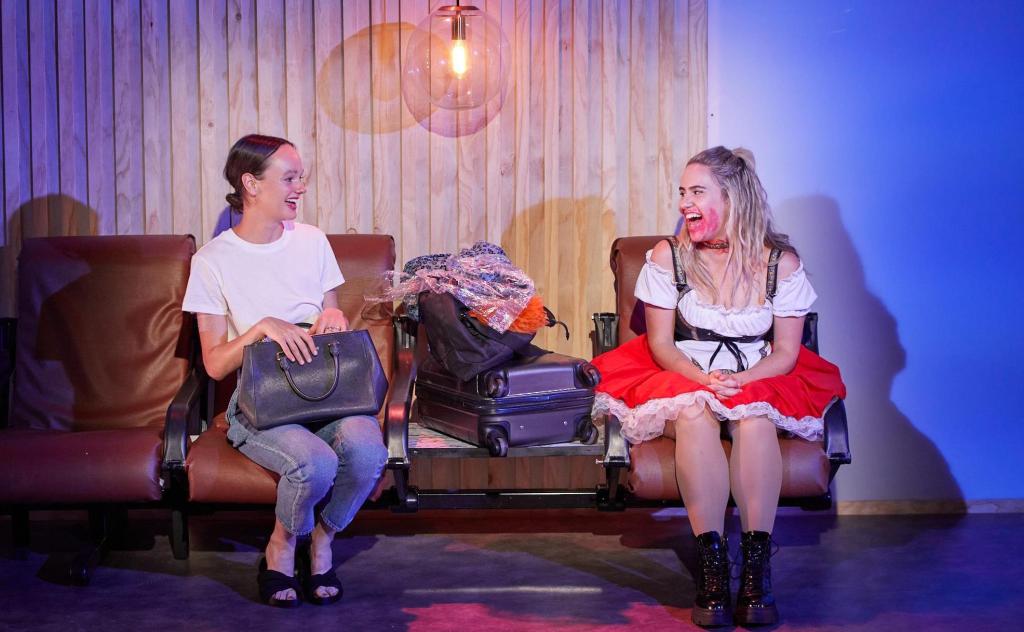 Emily Milledge and Michelle Brasier in The Feather in the Web. Photo: Pier Carthew.

Searching for labels to define our bold anti-heroine’s behaviour in the crazy-beautiful debauchery that is Nick Coyle’s The Feather in the Web is understandable. Because right from the start, Kimberly – played with expert intensity and sustained disaffection by Michelle Brasier in the play’s Victorian debut for Midsumma – is definitely ‘psycho’. But the whole point of this adrenaline-packed theme park show is that it roundly rejects any kind of simple reduction. All bets are off in an exploration of Eros, the fluidity of sexual identities, and the vulnerability non-conformists face in the constant manipulation and identity curation that governs all romantic perceptions in real life. How good are your Instagram pics? Tinder conquers all, doesn’t it?

Brasier’s burn everything, pagan goddess performance is very un-woke in that unique Kaspar Hauser (a child bought up in total isolation) way. She ignores all forms of social nicety and redesigns the narrative to suit her own needs. It makes for a super arresting meta-theatre experience: everyone references popular culture; a ruse within a story so ribald that you’ll be laughing and gasping by turns because it all gets flipped and shit gets very real by the end. The dialogue is whip-smart and filled with heightened exaggeration.

Coyle’s Kimberly is stuck in a very bent coming-of-age story. She is ruthless, conjuring screen sisters from Heathers to Scream Queens while successfully playing with binaries of love and loss, fulfilment and emptiness, and lack of intimacy versus independence. Kimberley is also a cipher for the perils of love in the age of ghosting and is easily dispensed with by the gormless upper-crusty types she attempts to invade. Coyle has her falling in love with Miles, a niche brand manager, but Miles and his fiancé Lily – performed with neurotic ambition by Emily Milledge – have other plans. But then, Lily provides the perfect foil to Kimberly’s angry woman and subverts all the usual romantic comedy tropes.

A powerhouse performance by Belinda McClory that is one part Katie Hopkins, two parts pity party who tragically misses her one chance at love reveals much more about the embittered rage beneath the endless glasses of pinot gris she clutches. Georgina Naidu, best known for her role as Prani in Sea Change, is marvellously chameleon as the authoritative psychiatrist and especially vivid in the operatically mind-bending underworld. It’s so rewarding to see these iconic Australian actresses alongside diversely talented actors George Lingard, Emily Milledge and Patrick Durnan Silva whose collective comic timing as insipid chorus members is stunning in equal measure.

Kudos to costume and set designer Bynna Lowen for evoking a wide range of character types and pop culture references in the costumes and set. The episodic nature of the piece works well within the confines of the set comprised of malleable leather armchairs, with lightbox projections augmenting each scene. The lighting and sound are spectral and spectacular in their aural and sensory dimensions.

Declan Greene is a great director and provocateur but here, unlike his direction on Blackie Blackie Brown or his writing in Homosexuals, there is more restraint and nuance to the characters and Greene draws out their oppositions effectively. They may play like cartoon characters – Patrick Durnan Silva being the over the top ‘Hysterical Gay’ stereotype for example – but the material is much darker. Still, while I admire his oeuvre, there is a sneaking similarity to the way he creates images, using projections to explode narratives last seen in Wake in Fright at the Malthouse that stretches back to the 90’s in theatre. I’m keen to see his style evolve into something perhaps more even more definitive. And while it’s a sure bet that there isn’t one theme to pin down in this panoramic beast of a play, it could do with some further dramaturgical work. There are some weak notes and some particularly brutal treatment of Kimberly left me white-knuckled, but nonetheless it’s gold star hilarious, cataclysmic theatre that packs a lot of heat.