Rich in symbolism, doom and hope, you live through the cycle of life and death at the hands of Romeo Castellucci in his rethink of Mozart’s iconic Requiem.
Gina Fairley 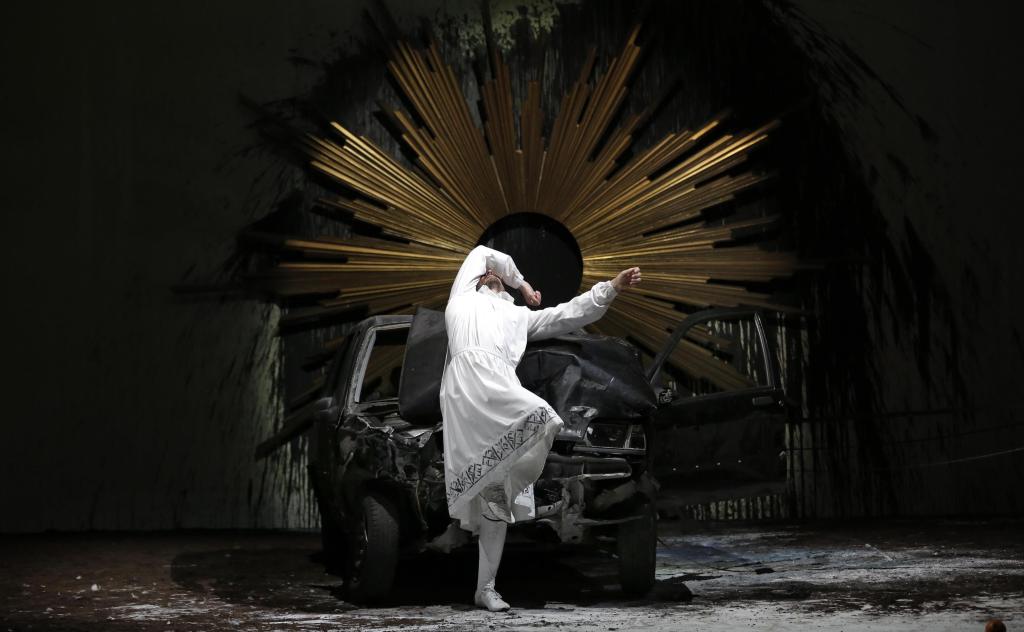 Mozart’s Requiem – his last work, a funeral mass – is among his most famed, and is often presented by choral groups. But Italian director Romeo Castellucci has turned that familiarity on its head in a new co-production between Adelaide Festival and Festival International d’Art Lyrique d’Aix-en-Provence, France – the first of three major productions to be co-commissioned over a three year period. Castellucci’s version of Requiem made its Australian debut this past weekend at Adelaide Festival Theatre, to standing ovations.

Surprising Mozart aficionados, music director Raphaël Pichon, has interwoven Mozart’s score with everything from Gregorian chants, to the Masonic hymn Meistermusik, the German church song O Gottes Lamm by Mozart, and arranged by Vincent Manac’h, among others, in a seamless inversion. It made for an intriguing musical concept that extended Mozart’s original score beyond a celebration of the dead, to a celebration also of life.

I suppose in some ways this goes back to the origins of Requiem, and thus does not rupture its integrity. It is believed that Mozart’s student, Franz Xaver Süssmayr completed Requiem from his deathbed instruction; its genesis is arguably also collaborative.

This kind of sensorial tapestry that Castellucci and Pichon create in tandem with Requiem – visually bold, aurally textured and psychological challenging – serves as a kind of canvas upon which to tell a story.

‘I have the feeling that Mozart’s Requiem – both music and text – are particularly “right” for today,’ described Castellucci in the production notes. ‘In it, you can observe the anguish that runs through our humanity, which is prey to the idea of extinction, both of us as individual and as a species.’

This is played out most directly as a series of projections to the back of the stage, what Castellucci has described as an ‘Atlas of Extinctions’. They map all the world has lost from species, to languages, lakes, architecture to peoples. In recognising sites such as Lake Mungo, Chernobyl and Fukushima, for example, this becomes a contemporary story of loss and warning. This sentiment reaches a crescendo when these projections move into ‘Extinctions of Today’, forecasts of what our actions are threatening. In all this doom, however, there remains hope, should we care to listen.

The minimal sets are striking with the polarity of black and white persistently played out. The black walls are literally ripped off, and the stage becomes completely white, only to be splashed with colour, as life is re-born in front of us.

Castellucci has chosen to use generic folkloric dance to capture the mood of celebration, vitality and spring, often employing the choristers who move in concentric circles and simple movements that feel timeless and ritualistic. The stage is filled with colour, trees and flowers – their own cycle of life a reminder of impermanence and fragility, short lived.

Early in the production, a young girl (Mietta Brookman) is doused with paint, then covered in pigment before being raised to ‘hang’ from the rear wall. It is minimal but an incredibly arresting image.

This expands to a sequence where the stage walls are sprayed with yellow, blue and pink paint in sweeping gestures before their joyous moment being obliterated by black paint thrown with a level of aggression.

As times, viewers struggle to keep up with the roll out of symbols – this is a production you could see a couple of times to grasp its full intention.

A young boy (Luca Shin) enters, kicking a skull around like a football, while singing the opening Kyrie from Mozart’s C Minor Mass in a simple, pure vocalisation. It is an abstracted motif but one totally within our grasp.

Following the celebration of life, Castellucci achieves a visual coup, first bringing soil onto the stage, which the choristers rolling in to spread it in a very primal way. You can almost feel an ominous tone building, as we metaphorically return to ‘dust’.

It is followed with a dramatic sequence, where one-by-one choristers flay themselves on the bonnet off a car to depict road fatalities, before moving to the side and laying on the floor as a row of corpses. Laying on their backs they continue O Gottes Lamm (Lamb of God) – the sacrifice, and sense of succumbing to tragedy, is overwhelming and powerful.

The entire ensemble collapses at the point in the Lacrimosa, the point where Mozart it is believed to have broken off when writing Requiem. The cast sheds their clothes to return to a state of nature, the singers moving into a huddled formation in the dark during the Agnus Dei.

The stage is elevated vertically – rags and soil falling to the ground, as if risen from the dead, cleansed. In conclusion, a woman walks on stage with a baby, which she leaves there and then walks off, as a young boy sings In Paradisum, ‘May the angels lead you into paradise’. The final message is one of hope, and an endless cycle.

There is much to ponder in Castellucci’s production. While Requiem is filled with darkness and a sense of looming tragedy and end, there is also a radiant quality and a celebration of beauty – and if anything, a level of acceptance – the fait accompli of life.

The underlying message, however, feels a very contemporary one. It beckons us to reflect not only on our individual lives, but humanity’s destiny and the destiny of our planet.

Castellucci’s aim was for audiences to approach Mozart with ‘new eyes and new ears’. He not only delivered in doses, but with Pichon has delivered a work of art for our times as we face great challenges globally – environmentally, socially and even in terms of excess, desire, and empathy.

This is a production that sits with you, and thankfully so.