Immerse yourself in the dreamlike world of Reg Mombassa.
Rebecca Curtin 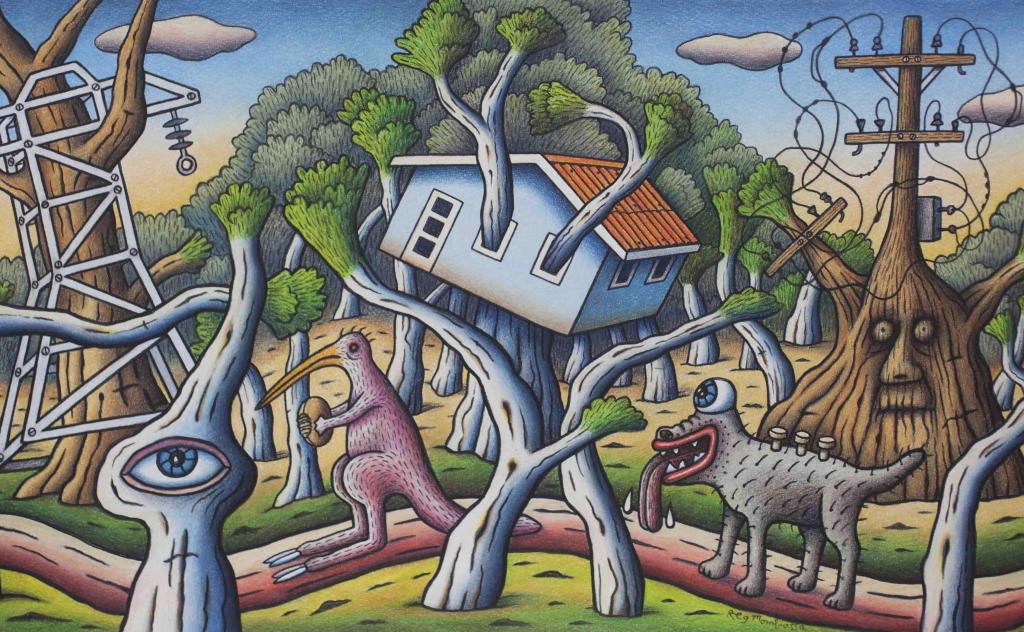 Psychedelic Realism is an exhibition of over 100 works by Reg Mombassa (aka Chris O’Doherty) co-curated as a collaboration between the artist and aMBUSH Gallery, Canberra’s stunning new exhibition and events space overlooking ANU’s leafy campus.

Ranging from Reg’s earliest self-portrait in 1969 to pieces completed weeks prior to the exhibition opening, his works comprise a range of mediums; screenprints, lithographs, posters, paintings, etchings, digital reproductions, digitals on canvas, and the more recent charcoal, coloured pencil and glitter works. Amongst the several self-portraits on display is the Archibald-nominated Self-portrait with high pants (2007).

Reg is well-known as a member of one of Australia’s best-loved bands, Mental as Anything (sadly, the exhibition opening occurred in the same week as lead singer Andrew ‘Greedy’ Smith’s sudden death). He’s equally ingrained in the fabric of Australian popular culture due to his irreverent and dreamlike images depicting life in Australia and New Zealand, particularly the graphics produced during his association with surfwear label Mambo.

Most of the works in the exhibition are for sale, and the popularity of his Mambo graphics is reflected in the ‘sold’ red dots underneath nearly all of these prints. They include Australian Beer Tree (1994), which depicts an Australia-shaped tree growing cans of beer with a drunken koala, kangaroo and sheep lying beneath it while the sun shines brightly in the sky.

Many of Mombassa’s works are observations of suburban and rural landscapes inspired by his experiences living in New Zealand, during his early life, and Australia. He said ‘it has occurred to me that for the non-Indigenous inhabitants in this part of the world, the childhood home and yard are the nearest thing we have to an ancestral dreaming.’

This is reflected by images of houses he grew up in, stunning landscapes revealing the play of light and shadow on trees, hills, houses and roads of Australia and New Zealand, and depictions of everyday surburban scenes, often with subversive, dark and hilarious social commentary. Analysis of the Trans-Tasman relationship can be seen in Metaphorical Proximity (2019) in which a kangaroo and kiwi are unhappily chained together at the neck and walking down a dark and foreboding road.

Reg’s sense of humour, penchant for the bizarre and biting satire are in abundance in this anthology of his life’s work. He references popular culture, art, religion, Indigenous issues, history and politics and uses source materials as diverse as dogs, muscle men, real estate, earthmoving equipment, folk art, dictionaries, and bibles, as well as daily news from papers and television.

A number of figures appear regularly in Mombassa’s work. One of these is Australian Jesus, a three-eyed 21st century superhero who personifies the utopian Australian values of compassion, tolerance and equality. Station of the cross no.3 : Australian Jesus with telegraph pole (2019) shows a bleeding figure collapsing under his telegraph-crucifix whilst observed by a chorus of disapproving police.

Mombassa challenges his audience, often through brutal and dark imagery but equally through humour, to examine their perspectives on everyday life as well as broader social and political narratives. This retrospective also showcases his extraordinary range across multiple mediums and cements his place as one of Australia’s most renowned and unconventional artists. Immerse yourself in his unfiltered imagination in the light and air of aMBUSH’s beautiful ANU eyrie.

Rebecca Curtin is a Canberra-based writer who has written for Shanghai Family, Lifeline Shanghai and Parents & Kids Shanghai.