Review: Out of Chaos, Gravity & Other Myths, Adelaide Festival

One of Australia’s most exciting circus companies finds the sweet spot between the intimacy and ambition of previous works, resulting in an outstanding new production.
Richard Watts 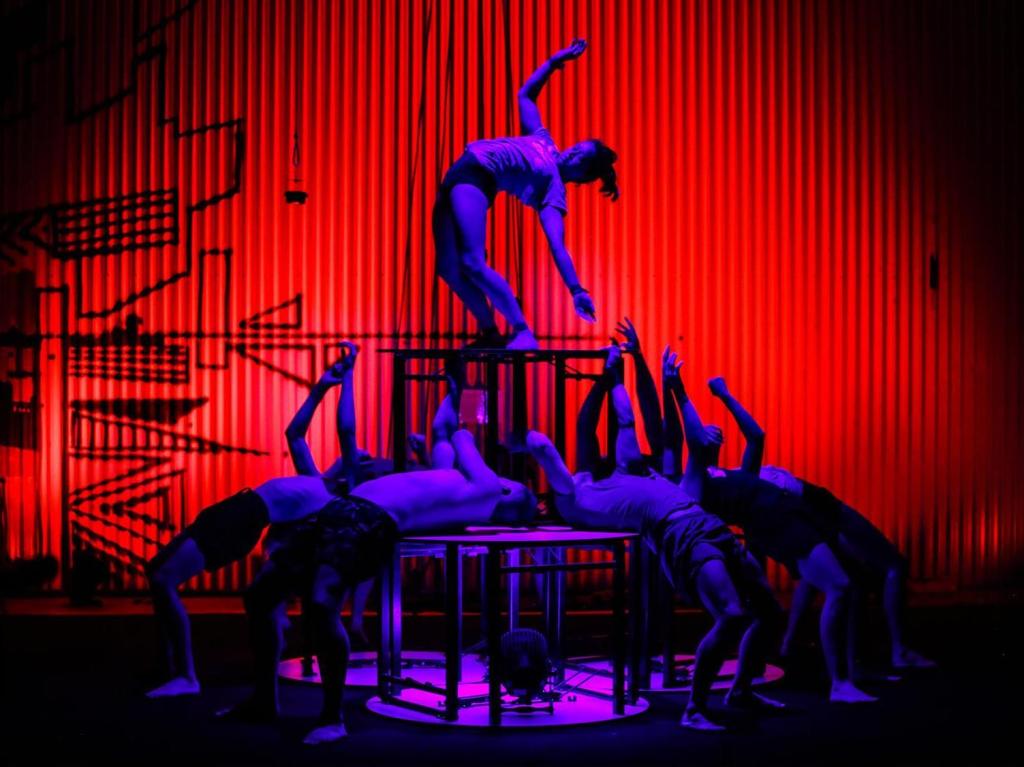 Shadow-play and football-style commentary blend with lyrical athleticism and live sampling of the acrobats’ grunts, gasps and spoken fears in the latest work from Adelaide’s exceptional circus company, Gravity & Other Myths.

Whereas A Simple Space (their breakthrough 2013 production after 2010’s thrilling Fringe debut, Freefall) was stripped back and playful, and Backbone, the company’s first Adelaide Festival commission was an altogether grander spectacle in which the emphasis on stagecraft occasionally threatened to eclipse the circus arts, Out of Chaos… combines the best of their recent productions in a work that is imaginative, expressionistic, thrilling and aesthetically refined.

Bodies flex and contort, roll and fall, swing between legs and rise high above the stage. Playful rivalries – a feature of earlier works from the company – are explored through competitive handstands and song.

Ensemble unity is palpable and the circus skills on display are superb, while regular vocal interludes – in which the acrobats reflect on the show to date, update us on their familiarity with certain routines, their recovery from injury or the sweaty state of their balls – provide insight and humour, as well as a greater sense of intimacy and connection between onlookers and performers.

Gender stereotypes are shattered, with strong women carrying and tossing men instead of women being thrown and manipulated like objects, while the male members of the company reveal their vulnerability by sharing their fears, doubts and pains directly with the audience.

Boundaries between stage and audience are blurred – the production begins with a torch lit procession up from the auditorium and later sees a return to the aisles with acrobats playing singing bowls. Such audio-rich sequences are enriched by composer Ekrem Phoenix, whose live score – sometimes glitchy and scratching, at other times sonorous and powerfully sung – samples regularly from the performers’ direct addresses, with microphones dangled over their faces as they lie prone or held up to their mouths as they form a three high.

Phoenix is also incorporated directly into the acrobatics in sequences demonstrating director Darcy Grant’s skilful integration of the production’s many elements into a rich and cohesive whole.

Geoff Cobham’s lighting design (assisted by Max Mackenzie) is an integral part of the production and features hand-held torches illuminating half-seen adagios, headstands almost swallowed by shadows, and a memorable and beautiful hoop routine illuminated by softly swaying overhead lights, installed earlier by the acrobats themselves as the performance unfolds. Cobham’s colourful and slowly discarded costumes, and simple yet dramatic stage design are also striking and effective.

Out of Chaos… is an outstanding production, and aptly demonstrates why Gravity & Other Myths are in such high demand on the international stage. The company’s strongest work to date, it demonstrates a considered and potent consolidation of their aesthetic while hinting that their best is yet to come.