Noli me Tangere is an epic rendering of a revered story.
Judith Greenaway
[This is archived content and may not display in the originally intended format.] 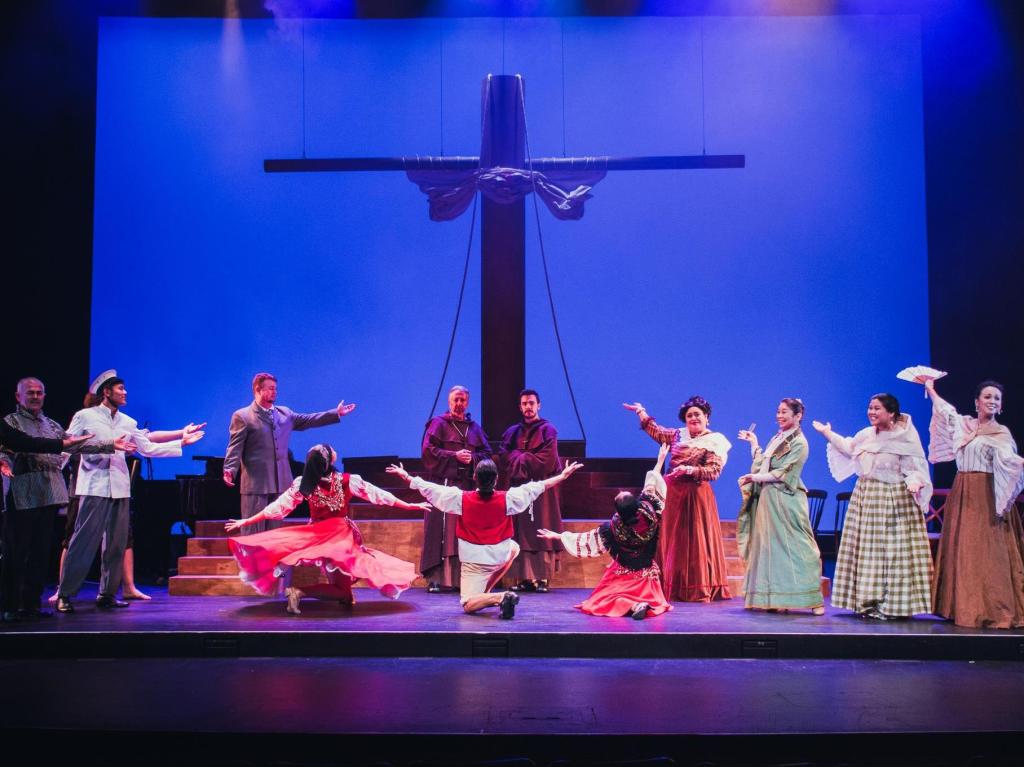 The cast of Noli me Tangere. Photo by Shakira Wilson.

A new musical on a grand scale is always exciting to watch and Noli me Tangere is an epic rendering of a revered story with some very good singing, lyrics, political and personal, and replete themes which echo from the past. It is a new work, though, and perhaps there are things to say but they are small matters when the production reaches across the footlights so elegantly with romance and rebellion in its heart.

Noli me Tangere, written by Allan McFadden with the book and lyrics by Peter Fleming, is adapted from the novel of the same name by Dr José P Rizal.  The production brings a nationalist hero to the stage. In the late 1800s, Crisóstomo Ibarra returns to his Philippines home. For seven years he has been studying in Europe and he seeks out his former sweetheart, Maria Clara, to see if their love can be re-kindled. At a Manila sophisticate’s party in his honour he encounters Padre Damaso who will be important in Ibarra’s fate as Ibarra awakens to the social and cultural imperialism of the Spanish in his beloved homeland. Love and revolution swirl in him and his decisions are those for a nation coming out from colonial rule.

Miguel Castro plays Ibarra with a winning energy and underlying positivity. His expert work is particularly on show in the first two songs which are very slow and do not provide the opening to the production that one may wish for. Castro, however, gives them a watchability which holds the attention until the upbeat elements of the score arrive. Castro has charisma in this lead role and gives a very good account of his character’s past and his future aspirations for his country. Castro is also well cast to make a romantic and beautiful couple with Susana Downes as Maria Clara. Their duet ‘Could I Ever Forget You’ has their parts separated until the lovely voices entwine together in the final sections and Downes’ performance sits expertly inside theatrical expectations for the character.

Susana Downes as Maria Clara and Miguel Castro as Ibarra in Noli me Tangere. Photo by Shakira Wilson.

There are several other performances which also give depth to the production. Lena Cruz plays a mother of two boys and she brings a sympathetic, fully realised character who makes the audience smile and yet fear for her. It’s a heart-breaking performance from Cruz. A lovely contrast with Ballina Gee who appears to have enormous fun with the broadness and dim nature of her snobby character, Victorina. Chris Hamilton is Damaso and his work has considerable authority as does David Hooley as another Padre. Sean Perez has presence and empathy as Tasio and together with Marcus Rivera’s well created Elias these men drive the political aspects of the story.

The setting serves the purpose for the first outing of this important work and some of the costuming is sumptuous to enjoy.  Director Aarne Neeme has a committed ensemble to work with here and the band under the conductorship of McFadden is also excellent in support. The show does cry out for more complex arrangements and orchestration but the lyrics are intelligent and emotional for the most part.

The finale of the production is passionate and poignant as one would expect from a musical with such a powerful pedigree and it is a credit to the cast and crew that many audience were on their feet for the curtain calls. Noli me Tangere may be a flawed production in this first incarnation but that doesn’t diminish the impact it has on a supportive audience.