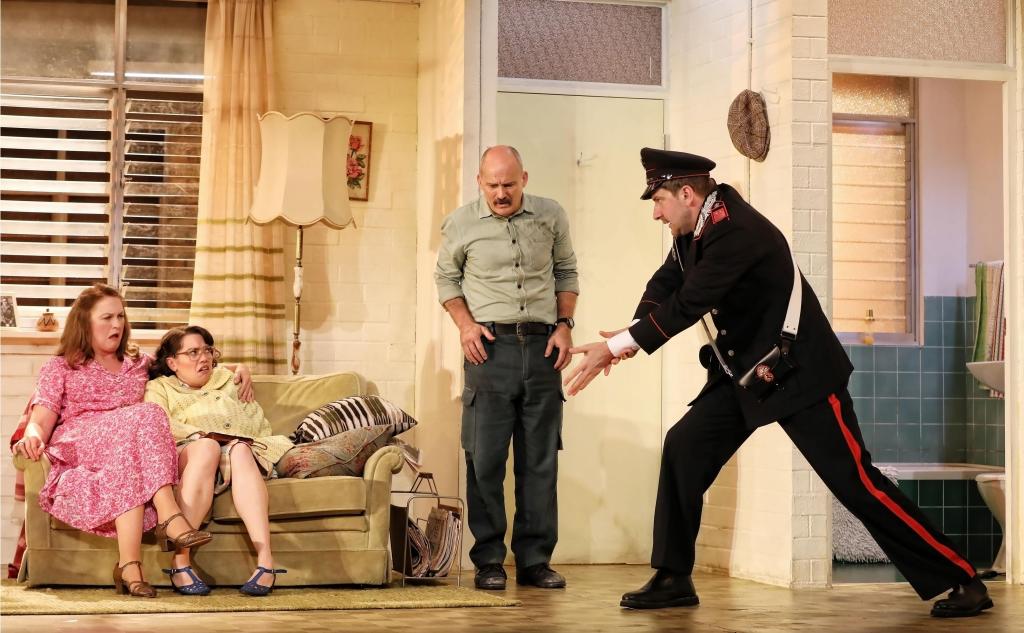 One door? As a superb set spends the first few minutes of No Pay? No Way! doing a coquettish spin and bow to rapturous applause, there is a sudden thought. This is classic farce territory and there’s only one door? But what fun is to be had when the audience gets inside. This production, from Sydney Theatre Company, will pile on the surprises, the satire, the physical comedy and the comic assassination of politics, religion, workers’ rights and slogan-based feminism.

Written in the 1970s, the play is by master theatre-maker Dario Fo; this splendid new adaptation is from Marieke Hardy. In a socialistic state, Antonia and her best friend Margherita are handicapped by true-believer, working-class husbands who would not be pleased that their wives have a stash of ‘liberated’ supermarket items of dubious edibility. However, they are hungry and there is no point looking a gift riot in the empty trolley.

The script is beautifully true to the play’s roots with enough accordion, spoken and accented Italian and boiler-suited apparatchiks to satisfy any purist. Added piquancy, too, comes in the overt, delicious theatricality and the bravery required of the actors as they whip through the fire-cracker dialogue and hurling about. One will never underestimate the stresses on a traffic cop again. Glenn Hazeldine, Rahel Romahn, Helen Thomson, Aaron Tsindos, Catherine Văn-Davies have pinpoint physical timing and a wry wink to the audience as misinformation compounds to an entirely unexpected, but weirdly logical conclusion.

Director Sarah Giles harnesses the brilliance of her cast for both frenetic lying and deep think prevaricating, with the audience completely and gratefully in on the joke. The director amps up the disarming silliness with a pace which, thankfully, occasionally leans with intent against a wall, thereby giving the audience a chance to catch their breath. The laughs, and the witty skewering rarely let up, but Giles also allows for the odd speechless moment with a cricket-rich silence.

The audio and music in this production are so enmeshed in plot that when the audience does notice them, the laughter is rumbling and unifying. There’s an audio joke going into Act II which doubles down the comic and political nature of the work. The set, too, gets in on the act to the enormous delight of the spectators. Several times it gets its own applause. The production design is coherent and narrative with so many tiny touches to delight in – for example, the costumes all give the impression of rolled-up workers’ sleeves, even the women’s dresses. The dusk-to-night lighting uses practical fixtures with considerable warmth and there’s a workers flag riff in darkness which is a complete joy to watch.

Liberation takes many forms in this stellar offering which contorts riotously for two hours to hit the frontal lobe along with the funny bone.