A minimal set only serves to punch this opera into high voltage as the soloists offer a tour de force of one of opera’s great tragedies.
Gina Fairley 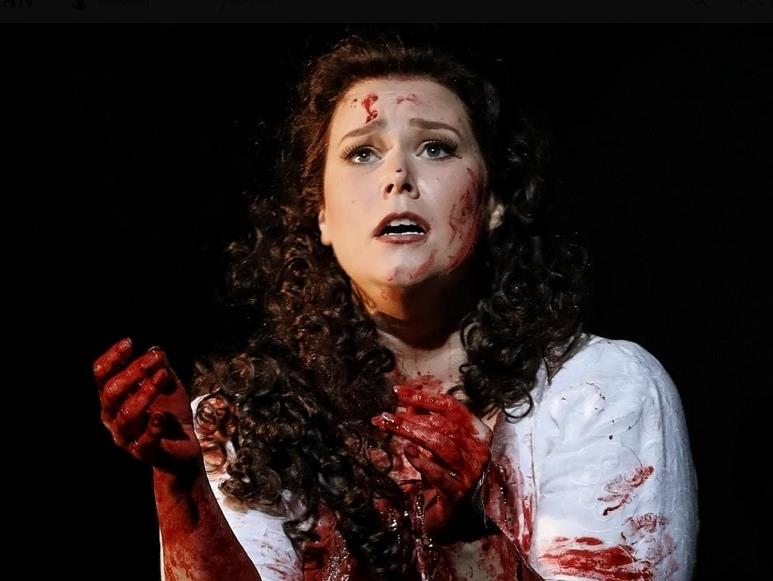 There is something about this Opera Australia production of Lucia di Lammermoor that is truly captivating. First performed in 2012 and designed by John Doyle, this is the first revival return under the helm of Roger Press. When it was premiered, opinions were split over its minimal take of Gaetano Donizetti’s opera, which was based upon Sir Walter Scott’s historical novel The Bride of Lammermoor set in the hills of 17th century Scotland.

Simply, the set is minimal in the truest sense of the word – no castles, no kilts, no plush curtains, no congestion. Some have even described this production as ‘gloomy’, but Liz Ascroft’s set acts to magnify the presence of the principals on stage, who seemingly pop with diva energy – their big arias and tragic tete-a-tete larger than life.

How can you compete with all that emotion? The focus of this bel-canto opera is its incredible libretto, so why hone it back?  This is where Ascroft’s set works well.

Jane Cox’s lighting animates the set in the most elegant of ways – sharp angles focus the intensity. This package is further extended by Ascroft’s costumes; the dour browns and blacks pushing the chorus into the background. The style of this opera means that often the chorus just stands and sings while the soloists command the stage. Doyle and Ascroft make sense of that awkwardness, while Cox’s lighting maintains their presence.

The story of Lucia di Lammermoor unfolds as an emotionally fragile Lucy Ashton (Lucia) is caught between her own family and that of the Ravenswoods, and denied her love for an arranged betrothal. Hardly, 21st century stuff – but this opera is a classic and that is its greatest strength.

Soprano Jessica Pratt is commanding as Lucia. Returning to Australia for the role after having performed it across the globe – one of only three Australians to have sung it alongside Nellie Melba and Joan Sutherland at La Scala (that Milan opera house famous for its uncompromising audience). She nailed it there, and again here in Sydney. She executed this technically difficult role with passion and accuracy.

Pratt was warmly acknowledged by the audience on opening night with the entire house in standing ovation. Her portrayal as bloodied bride Lucia was emotionally unforgiving, incredibly controlled yet fearless, and vocally mind blowing.

But Pratt was not alone. The three leads make this production a must-see: Pratt, Michael Fabiano as Edgardo di Ravenswood and Giorgio Caoduro performing the role of Lord Enrico Ashton, Lucia’s brother.

Italian baritone Caoduro as Enrico maintained a dominating firmness in his vocal role, while American tenor Fabiano matched Pratt’s brilliance in terms of its polish, reach and intensity.

This production can not be reviewed without mention of Conductor Carlo Montanaro and the OA Orchestra. Montanaro’s empathy and passion for this opera was palpable – his connection with the cast was clear during the curtain calls.

This is a production that celebrates opera for opera. It is a real gem.