Presented as two full-length plays, which audiences can see on consecutive nights or back to back on the same day, this is an epic, occasionally frustrating sequel to JK Rowling’s remarkable act of literary imagination.
Richard Watts 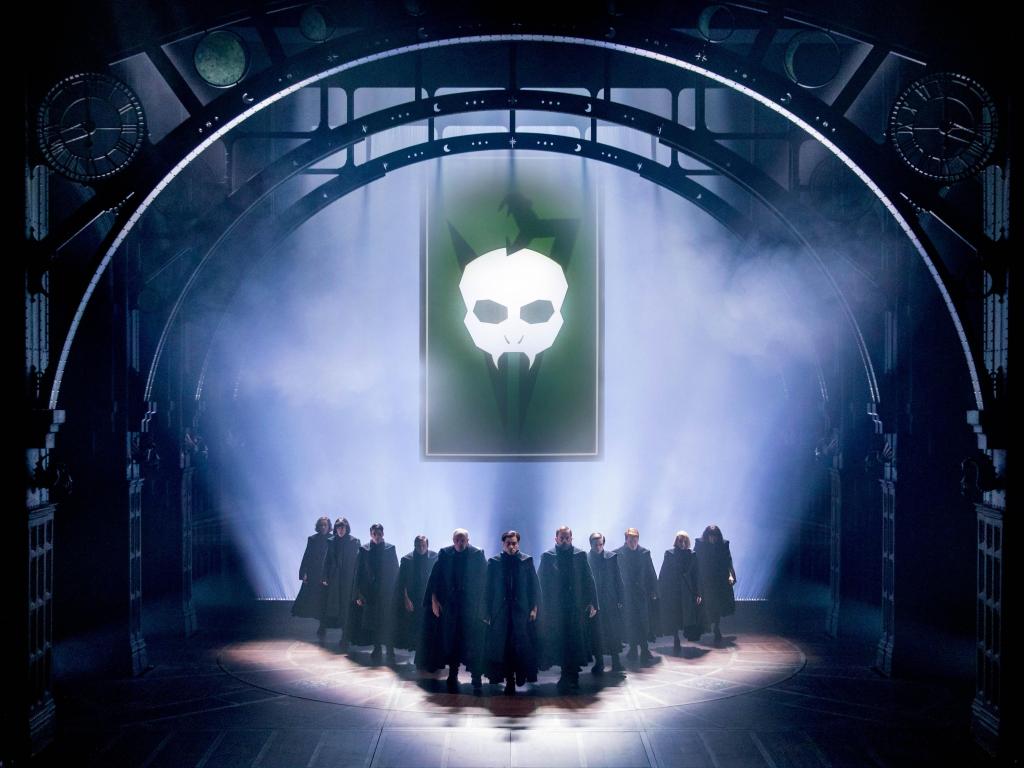 The Australian company of Harry Potter and the Cursed Child. Photo Matt Murphy

When JK Rowling’s seventh and final book in the Harry Potter series, Harry Potter and the Deathly Hallows, was originally published in 2007, it closed with an epilogue, set 19 years after the novel’s final, climactic scenes. Derided by some, and indicative of Rowling taking firm control of her literary creation to ensure unwanted sequels were impossible, the epilogue now springs into rich theatrical life in Harry Potter and the Cursed Child, an epic continuation of Rowling’s vividly imagined world of witchcraft, wizardry and all its wars and tumults.

The exhortation to #keepthesecrets which accompanies the production makes any discussion of the plays’ plot difficult – although those familiar with the tropes and narratives of the books and their filmed adaptations, such as this reviewer, may find that certain plot developments are frustratingly predictable.

That said, the production also features multiple moments of genuine theatrical magic, not to mention passages of surprising drama and poignancy, which only a curmudgeon would seek to spoil. Thus, there will be no plot spoilers here – read on without fear.

Read: The Boy Who Lived On: 20 Years of Harry Potter

Numerous other characters appear, some new, others returning from Rowling’s novels, though for the sake of discretion this review will say little more about the plot or the characters which drive it.

Narrative aside, what of the production itself? It is genuinely epic, though the first play is over-reliant on exposition to establish its complex plot. That said, together the two plays offer up enough coups de théâtre to more than justify the price of tickets. Indeed, listening to the audience’s gasps of delight and surprise was, for me, almost as enjoyable as the production itself.

Imogen Heap’s score often feels trite and intrusive – more suited to television advertisements rather than the epic story which unfolds on the stage of the Princess Theatre. Other technical aspects are impressive and dramatic, especially Neil Austin’s superb lighting design and Jamie Harrison’s sophisticated stage illusions and magic, although Movement Director Steven Hoggett’s over-reliance on swirling cloaks to cover set changes begins to grate well before the first of the two plays has concluded.

Equally frustrating is the Ouroboros-like insistence of Jack Thorne’s stage play (based on an original story by JK Rowling, Jack Thorne and director John Tiffany) to dwell on established elements of the Potter-verse rather than driving the narrative forward into new and unfamiliar territory. Clearly, this is a play written for the fans, and though the plot occasionally borders on fan service, at other times (especially in the second play, when exposition is dropped in favour of genuine dramatic development) the story truly soars.

Despite having to compete with the special effects of major films, the play looks superb. Its moments of illusion are truly magical, the interplay between set and lighting is beautifully integrated, and Katrina Lindsay’s costumes (especially in an otherworldly sequence of which I can say no more least JK Rowling track me down and kill me, though it’s hinted at in the hero image at the top of this page) are highly effective.

Unfortunately, some of the flaws of Rowling’s original books (as well as her clumsy screenplays for the prequel Magical Beasts film series) are also evident in Cursed Child.

Just as Rowling failed to canonically represent Professor Dumbledore as gay in her books, only identifying him as homosexual in a post-publication conversation, the play’s tendency to code a major character as queer (a key plot element given the close bond between them and another leading character) only to backtrack later in the play via a clumsy assertion of heteronormativity, feels like an act of authorial cowardice.

Representation matters, as director John Tiffany clearly recognises, having cast an actor of colour as Hermione Granger – but flirtation with representation, only to fail to deliver on the central message, not only feels cowardly; it feels cheap and exploitative.

It’s 2019 – isn’t it about time we had a definitively out and proud queer character in the world of Harry Potter?