What starts as a funny and relatable exposé of middle-class hypocrisy becomes uncomfortably screamy, shouty and stereotypical.
Liza Dezfouli 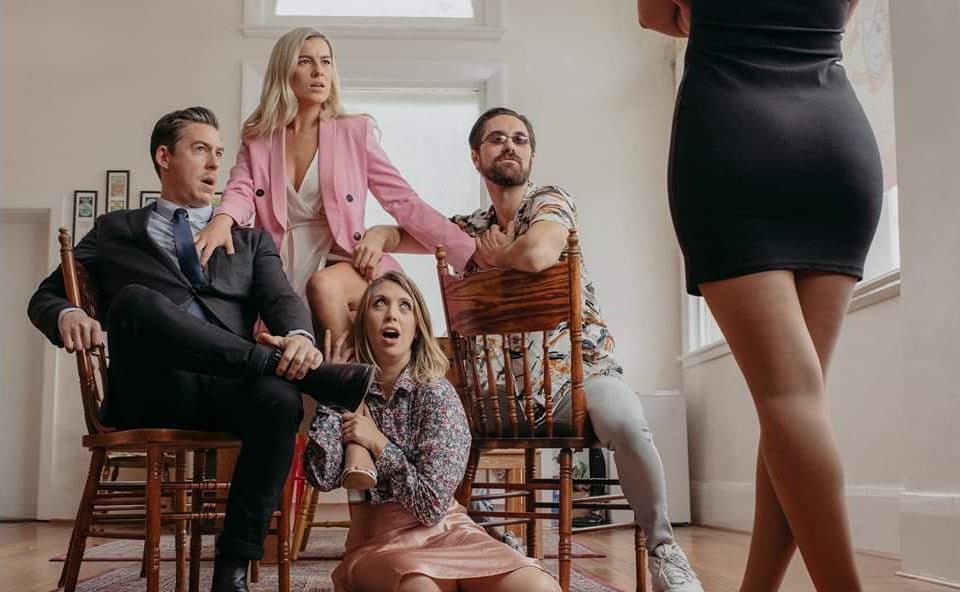 Eyes Wide Woke by Katherine Atkins, a Midsumma offering, explores the notion that people who think they’re fine with something and make a show of it are often not fine with it at all: the feeling that one is ‘woke’ can accompany a delusion of moral superiority. A bourgeois lesbian couple, Sara (Ashley Tardy) and Valorie (Ashleigh Coleman), invite a random sex worker, Jasmin (Emma Drysdale), to a dinner party, partly out of curiosity but mostly to show off to their friends how ‘woke’ they are by being  chill with ‘prostitution’, and also to test their friends’ boundaries – a game of ‘woke chicken’. The other guests are a screamingly loud queen, Angelo (Joshua White), and a straight man and Valorie’s ex, Noah (Luke Jacka). Those two still fancy each other and their underlying sexual tension is well played.

The action starts with Sara rushing around trying to make the place perfect – getting the music right and plumping cushions. She cooks dinner but later packs it into plastic containers and pretends it’s been ordered, saying she doesn’t want to look like she’s put too much effort into the dinner party, an incongruous decision but one which becomes a plot point. Valorie challenges Sara about having Michael Jackson on her music list which leads to an amusing exchange about cancelling favourite artists.

Eyes Wide Woke has its relatable moments and is funny to watch, with some cracking one-liners. The set is well designed, creating the illusion of private spaces and giving each audience member a different focus; you can’t see everything that’s going on at once. The play is admirable for attempting to expose middle-class hypocrisy. When things fall apart, suspicion immediately falls on Jasmin. For all her leftist rhetoric and posturing, Valorie has a big problem with sex work, especially once she discovers that Noah has visited sex workers himself.

Although the play tries hard not to objectify Jasmin, it does so by making her permanently seductive, glamorous and sexually available, off the clock. She spends most of the evening being all feline and sensual, waxing philosophical about sex work at a dinner party she’s been invited to as an object, in the company of a pack of wankers she’d surely be unlikely to bother with! Valorie admits that she offered to pay Jasmin to attend, and when Jasmin says she would have come anyway, you see the writer trying desperately to humanise the character through the trope of the ‘tart with the heart of gold’. The result is the negation of Jasmin’s professionalism. The play labours to justify Jasmin’s choice of work by making her a sole parent (‘you’d do anything for your child’) and overstating her ‘outsider’ credentials by making her a student of quantum physics or some such. A ‘worthy’ sex worker, in other words. Not someone simply doing a job for money like anyone else.

The subplot of Angelo, a loudly out gay man who is anxious because he’s actually bi and doesn’t want to admit it, doesn’t make sense and over-complicates things – now the play’s trying to do too much. But worse is Jasmin’s response: she snogs him. Why? She’s not at work and the dynamic between the two characters doesn’t suggest that she wildly fancies him. Again, like practically all non-sex worker imaginaries about people who do sex work, this play contributes to the reluctance and outright refusal on the part of the general public to see sex work as simply work, something sex workers themselves continue tirelessly to ask for.

Director Kashmir Cinnamon is aiming for farce while satirising the play’s middle-class characters. The acting’s great on everyone’s part, but I didn’t buy Valorie’s distress at the end, despite Coleman’s tears, because what comes before is so over-the-top and irrational. It doesn’t work to try and engage us emotionally after all; the performance would be better off restricting its range and staying in arch and ridiculous mode. Direction would be better off employing more barbed subtlety and less screaming; it adds to overall tension when you see characters desperate to shriek but having to force themselves to keep things nice. The performance turns out to be so overwhelmingly screamy and shouty that the experience became distracting and uncomfortable in such a small theatre space. I found myself wishing it would end because my ears hurt.