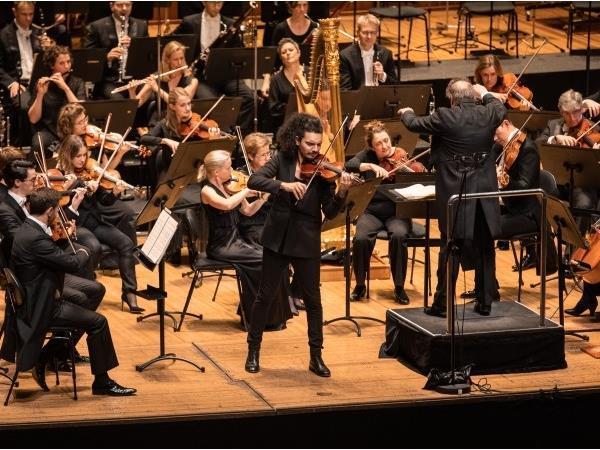 One thing that immediately impressed in the Sydney Symphony Orchestra’s performance as part of its Emirates Metro Series on Friday night was the sound its conductor Jaime Martin had managed to develop and refine in his time with the Orchestra. A former principal flautist, having founded his own orchestra (the Orquestra de Cadaqués), it seems he is a master at fine-tuning orchestral sound as well as being an experienced, dependable, efficient and expressive conductor. The SSO’s strings were particularly united, warm and vibrant, the winds impeccable in phrasing and tuning and the brass section sounded as if it was a vast and carefully balanced vocal chorus while the percussion section exhibited its usual excellence.

The program comprised an all-French first half, beginning with popular excerpts from Suites 1 and 2 of Bizet’s L’Arlésienne. Charismatic Franco-Serbian violin soloist Nemanja Radulović then joined the orchestra for Chausson’s Poème, Op 25 and Ravel’s Tzagane – Concert rhapsody, while the second half was a single work, Dvořák’s Symphony No 6.

To say that Radulović’s stage presence is unusual would be an understatement: a mane of curly black hair in a ponytail flies about with great gestures of his bow held aloft. Both have no musical impact whatever. Dressed in skin-tight all-black and often leather, more is more in regard to Radulović’s posture and movement as his face conveys everything from ecstasy through to despair. Although this is not to my taste, so what? Many in the hall loved it and slyly were filming him with their mobile phones. What’s more important is that though over-indulgent, overblown, hyperactive and wincingly self-referential, the playing was impressive, though annoyingly striving to always reach the absolute extremes of expressivity. His technique is phenomenal and intonation throughout was spot-on, but it was hard to see and hear Chausson or Ravel as Radulović was in the way. Paganini’s 24th Caprice was provided as an encore.

There was nothing showy nor superficial in Martin’s reading of Dvořák’s Symphony No 6.  Published as his Symphony No 1, it is a large-scale essay over four movements, clocking in at 40 minutes. The opening Allegro non tanto was all Czech open-air freshness and by way of some exquisite solos (particularly by oboist Diana Doherty) and rich brass choruses we felt richly satisfied by this broad-scale interpretation. The tender and romantic Adagio was enriched by glorious horn solos and ‘sung’ strings. The Scherzo: Furiant (Presto) was invigorating before a bracing return to airy bliss in the Finale (Allegro con spirito). A final muscular chorus from the brass section crowned this exhilarating performance.

It was curious that the hordes of people enjoying the Vivid Sydney festival on Friday night didn’t translate into good box office. Based on this standard of playing, the inclusion of a celebrity soloist and superb conductor, the hall deserved to have been full.