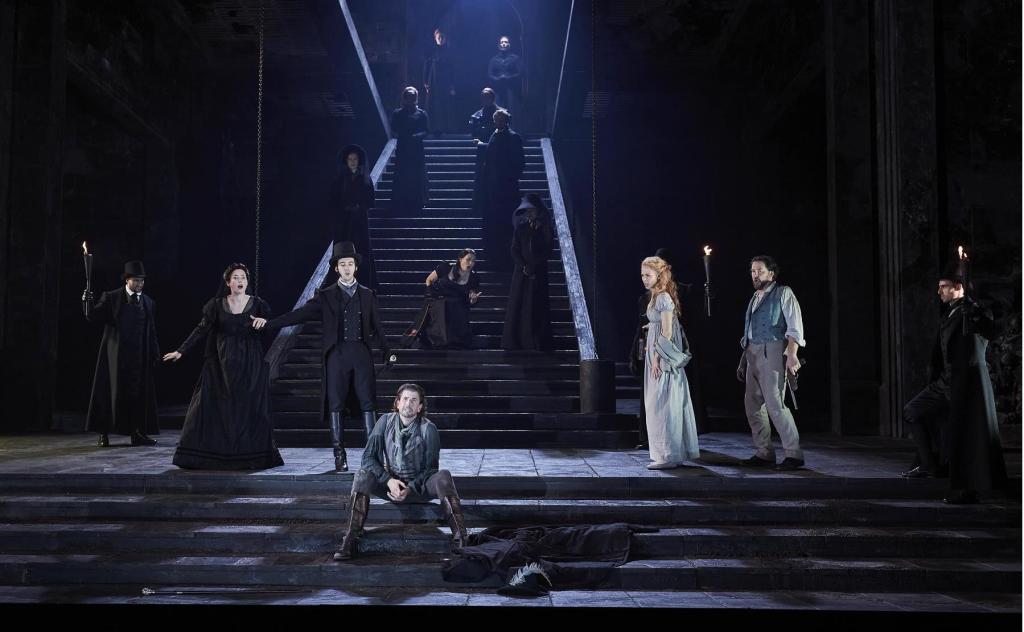 The curtains rise on designer Robert Jones’s cavernous and doom-laden Gothic set, reminiscent of something the post-WW2 German artist Anselm Keifer, wrestling with history, might have created. The stonework is dark. Rubble, including skulls, line the wings and a towering staircase ascends to the heavens.

And so the mood is set for Scottish director Sir David McVicar’s production of Mozart’s Don Giovanni, his third version of the opera that premiered in Sydney in 2014. Which is just as well because it is much more ominous than conductor Xu Zhong’s too-pleasant overture. And so the evening continues: part revelatory, part not.

McVicar is one of the great opera directors of our time, more interested in illuminating works that have been almost reduced to banality by overuse than in delivering hum-along evenings at the theatre to patrons. It makes his productions exciting, in the style of provocative German ‘director’s theatre’. He directs the singers to act instead of the stand-and-deliver of the bad old days in the staider opera houses.

Coupled with the presence of Luca Micheletti in the title role, the show could have been a heart-stopper. Micheletti, little known here, was a laurelled actor in Italy before taking an occasional use of his honeyed baritone full-time. Perhaps it’s because McVicar didn’t return to rehearse this outing of his production, but it didn’t quite work out that way.

The production underlines the traditional archetypes the three heroines represent: the high-minded Donna Anna, whose father Don Giovanni murders after a failed attempt to rape her; Donna Elvira, the good but fallen woman who is still inexplicably in love with the man who brought her undone; and Zerlina, the artless lower-class girl who is almost seduced by him, droit du seigneur, on her wedding day.

The women are a marvellous foil for each other. Soprano Eleanor Lyons (Donna Anna) sings strongly and resonantly to match her patrician bearing; her bright, clear coloratura in the two great arias, Or sai chi l’onore and Non mi dir, in particular bring the house down. Jane Ede (Donna Elvira) has a warmer, lovelier soprano, saturated here with sadness. And mezzo-soprano Anna Dowsley’s Zerlina, with minimal vibrato, is a perfect ingénue.

The men are patchier. Shane Lowrencev’s Leporello steals the show with a firm voice and a knack for comic acting without overdoing it. His catalogue aria, for example, sung with the orchestra in a sprightlier mood, is amusing without being titillatingly sexist. Lowrencev was in the premiere season of the production and doubtless benefited from McVicar’s direct direction.

Micheletti’s Don Giovanni does not convince as a seductively amoral aristocrat, though his warm baritone was pleasing without being stunning. His Don is a sleaze, without the moral ambiguity that Teddy Tahu Rhodes offered in the original, or that John Wegner presented in John Copley’s Tosca, for that matter, just before Christpher Alden’s coarse and John Bell’s clichéd Nazi version. Rhodes and Wegner gave depravity an edge because they were so damned attractive in those dreadful roles. Again, Micheletti’s acting might have benefitted from McVicar’s return.

Juan de Dios Mateo is a vapid Don Ottavio, his soft tenor verging on nasal at times. I couldn’t help thinking that the staunch Donna Anna would have been more likely to protect his honour than vice versa. Richard Anderson is a doughty Masetto.

Gennady Dubinsky’s stentorian bass is a creepy-enough Commendatore, but I was dismayed by the lack of trepidation his character conjured up. That he delivers the deathblow to Don Giovanni, consigning him to hell while on his knees instead of towering over him, rather undercuts the supernatural horror of the moment.

The finale’s sextet is a delight. In fact, all the ensemble singing by the principals is a joy throughout, their voices blending seamlessly and harmoniously. The OA Chorus is too.