A kaleidoscope of intersecting voices, images, themes and motifs and an extraordinary feat of collaboration for which all involved must be congratulated.
Jennifer Barry 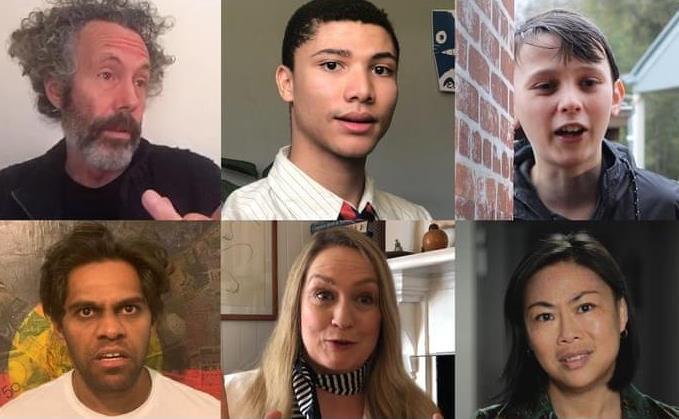 Artists have always been energized by the challenge of a constrained format. From paintings on cigar box lids to the poetic acrobatics of the Oulipo group, there’s something about being told what you can’t do that incites artists to show what they can do.

With Dear Australia, the constraint is the micro monologue and, like a sushi train of delights that just keeps coming, Australian artists have embraced the format to give us 50 bite-sized dramas, creating a theatrical smorgasbord that traverses the rage, humour, hope, and hopelessness of contemporary Australia.

Inspired by a project of the Abbey Theatre in Ireland, Playwriting Australia (PWA) invited 25 theatre organisations across Australia to each nominate two playwrights. PWA then commissioned 50 playwrights to each write a short monologue, which were then filmed by 50 actors. The result, Dear Australia – Postcards to the Nation, is an extraordinary feat of collaboration for which all involved must be congratulated.

Dear Australia was broadcast in three parts over three nights, collectively representing four hours of original content, with each night running somewhere between 80 – 90 minutes. Viewers are given a vestige of the live theatrical equivalent by the inclusion of pre- and mid-show breaks. My only gripe with the presentation was that I wished the credits for each work were shown for a longer, to allow extra time for reading. Still, the good news is that you can go online at any time to watch the program in full and stop and start as you please.

Dear Australia is a kaleidoscope of intersecting voices, images, themes and motifs, the rich breadth of which is impossible to capture in one review. This reviewer does not claim to have given each work the full attention it deserves. Instead, I found it is interesting to consider thematic similarities and divergences across the texts, as well as some of the diverse stylistic approaches of the commissioned artists.

Government-speak gets particular scrutiny, with several works invoking asinine marketing campaigns such as ‘we’re all in this together’ to highlight the dissonance between jargon and reality, especially for Aboriginal and Torres Strait Islander Australians, and Australians of colour. In one of the most compelling and authoritative pieces, Kylie Coolwell’s 2020: 232 Years, performed with astonishing power by Angeline Penrith, terms like ‘these unprecedented times’ are scorched for their erasure of Australia’s original virus, colonial invasion, whose pernicious effects continue to be wrought on Australia’s First Peoples.

Terms like ‘these unprecedented times’ are scorched for their erasure of Australia’s original virus, colonial invasion, whose pernicious effects continue to be wrought on Australia’s First Peoples.

One of the major strengths of Dear Australia is the foregrounding of Australian Aboriginal and Torres Strait Islander playwrights and actors, and it was a privilege, once again, to bear witness to the truth-telling talent of such incredible artists.

Mirroring the virus of colonialism, a recurring theme in many of the works is the scourge of racism and its deep hold on Australian society. H Lawrence Sumner’s poetic and deeply moving work, The Passenger’s Lament, beautifully performed by Shakira Clanton, challenges the conceit of a post-COVID world where racism, like the virus, has been eradicated.

And while Anchuli Felicia King’s witty satire, Our Lot 44 (given cracking life through Catherine Văn-Davies’ electric performance) offers a powerful statement on the overt racial abuse regularly endured by Australians of Asian heritage, Tasnim Hossain’s Delivery, enriched by Arka Das’ charming performance, speaks to the covert racism and micro-aggressions of everyday exchanges.

The interconnectedness of our world is foregrounded in Nakkiah Lui’s The Night the Bleeding Stopped, performed by the luminous Miranda Tapsell, and Matt Hawkin’s Unconditional Love, performed by Pontsho Nthupi. Both works highlight small private moments caught in the large butterfly effect of globalisation. In Willoh S Weilend’s, Hello Australia, the coronavirus is a fast-talking stand-up comedian who dishes out the responsibility for COVID-19 on a society that ‘makes [it’s] own hell.’ In Mary Ann Butler’s Threshold, Mother Nature is personified as a mighty force ‘reclaiming’ what is hers, purging the earth so that we can ‘begin again.’

Chris Beckey’s Home is Where the Heart Is looks at notions of (in)visibility, just as Rachael Chisholm’s, For Once, looks at the need to be heard. Similarly, the desire to connect (Mark Roger’s Distance, Gretel Vella’s Allan, Lucy Combe’s Flesh) and the desire to escape (Morgan Rose’s Slow Doom, James Elazzi’s The Flock) are given equal weight, sometimes in the same work (as in Bumpy Favell’s Tap Tap Tap). No one work ‘epitomizes’ a singular theme and narrative strands of these interdependent concerns weave in and out of almost every work.

Stylistically, the works in Dear Australia run the gamut. Some playwrights use humour as a salve (Sam Nerida’s Ladies Against Lockdown, Peter Cook’s Barry, Stephen Carelton’s Limbo), while others walk the delicate line of pathos (Emele Ugavule’s Goodbye Papa, Julianne O’Brien’s An Empty Church, Tariro Mavondo’s Second Coming). Others still embrace the raw emotion of realistic drama (Ellen van Neerven’s Baby, I’m Home, Nathan Maynard’s The Bravest Thing I Ever Did). Many utilised vivid, lyrical language (Richard Frankland’s There is the Light, Susan Roger’s Polished Pebbles, Glen Shea’s If only you could take a step in my shoes, Jada Albert’s Little Sister), rounding out a rich record of contemporary Australia in 2020.

The great thing about a program like Dear Australia is that there will be something that appeals to everyone. You may not love every work – I already have my favourites – but you will be impressed by the scope of this substantial collection, and you will want to go back, like a favourite TV show, and watch again.