Shows are almost always better when you can barely tell the difference between the stage and the stands – Calamity Jane is no exception.
Glen Falkenstein
[This is archived content and may not display in the originally intended format.] 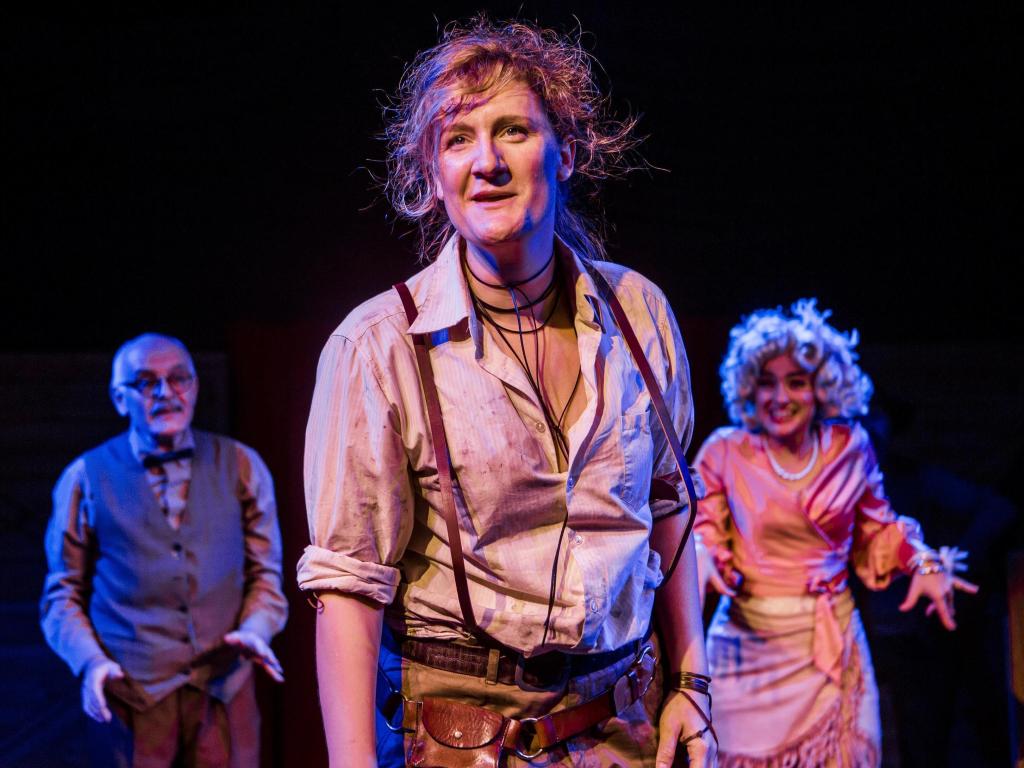 Moseying across town from the Hayes Theatre to Belvoir, the new production of Calamity Jane is part cabaret, part audience, with a hint of imrov but (mostly) theatre. Set in everyone’s only and favourite saloon in some far-flung corner of South Dakota, Calamity (Virginia Gay) makes do with a motley ensemble of blow-ins, fixtures and a walkin,’ talkin’ song n’ dance number (Francis Fryer) who just breezed into town.

Surrounded by those less than content with the same old routines and middling entertainment, Calamity pulls a promise out of her hat to bring superstar Adelaide Adams (Sheridan Harbridge) into Deadwood all the way from Chicago.

With a couple of dozen audience members littered throughout the bar and called upon at odd moments to contribute to proceedings, Calamity Jane is just about as immersive a play as has recently been staged in the likes of Belvoir’s Upstairs Theatre. Involving the larger audience (and unsuspecting patrons) at a moment’s notice, the production steers it’s shenanigans in directions far from dull, gleaning some of its best moments from the interactions that can only arise from those impromptu gems.

Demonstrating a few quick recoveries, the play’s first act is abundantly fun and memorable in large part due the upbeat musical numbers and a talented cast, first and foremost among them Gay who nails her character throughout. Matched only in parts by Harbridge, playing multiple roles, and Laura Bunting as Katie Brown, the three unite for the first act’s stand-out tune ‘Men!,’ bested only by the play’s far and above most accomplished number, ‘The Black Hills of Dakota,’ featuring the entire ensemble.

The cast of Calamity Jane. Supplied.

While the lengthy, buoyant and near-contained first act is almost a play in and of itself, the second act quickly loses momentum. Save for a couple of good numbers, this section drifts between varied dramatic and comical strands as Calamity Jane distances itself from the improvisational tone which so endeared its earliest stages. Determined to highlight its more traditionally dramatic advents, the semi-farcical tone befitting its variety-esque opening portions are above all what renders this production memorable. These moments clash strongly with Calamity Jane’s regrettably hurried, latter segments which verge on those tried and tested classical follies which unlike its most irrepressible triumphs lack animation and indeed the jauntiness which would justly cause any audience to enthusiastically partake.

Nonetheless concluding with a number which matches some of its characters’ most ebullient introductions, Calamity Jane, for its performances and several splendid songs, is a delight.