Impressions and critical reflections on the opening weekend of this year’s Darwin Festival by our Performing Arts Editor, Richard Watts.
Richard Watts 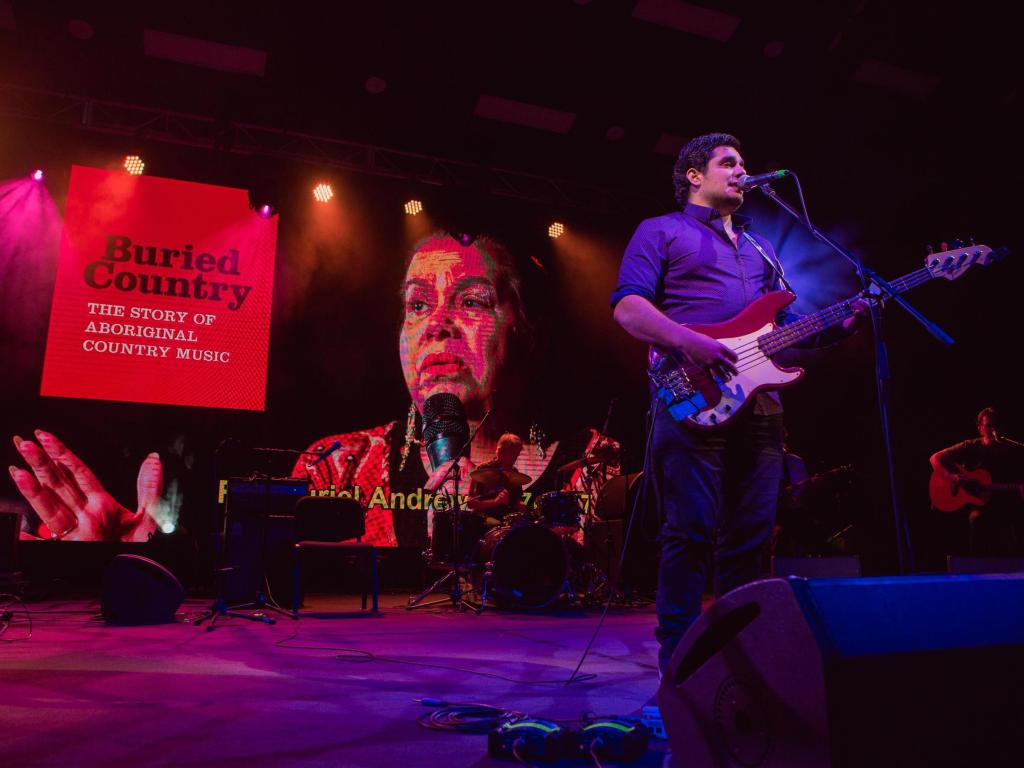 As dusk gathers, the sinking sun gilds the treetops which ring the grassy slopes of Darwin Amphitheatre, painting them in vivid emerald shades against the darkening sky. Beneath their boughs hang giant paper lanterns, illuminating a festive crowd gathered on picnic blankets and folding chairs. The air is soft and warm, defrosting my chilled Melbourne limbs. Laughter echoes as children play on the sloping lawn.

In the words of Larrakia singer Ali Mills, who takes to the stage with a ukulele to sing ‘Adelaide River’, the Darwin Festival’s free opening night concert is a rare moment where ‘you and me will meet’. As I watch, Aboriginal children and white children nearby play next to each other, but separately, eyeing each other with a wary curiousity.

Mills is followed by a combined choir, whose members include children, Charles Darwin University students, the LGBT choir True Colours, and members of the seniors choir, Still Belting Out. United, their voices pay homage to the breadth of the Northern Territory, starting with John Williamson’s lyrically trite but heartfelt ‘Raining on the Rock’. They sing with verve and passion, soft voices starting and more powerful voices following.

Next come the country anthem ‘Arafura Pearl,’ written by Kathy Mills (Ali Mills’ mother), a celebration of Darwin itself and now officially registered as an icon for its social and cultural heritage value in the Northern Territory.

This sets the tone for the concert which follows: a celebration of Aboriginal country music, Buried Country, and a passing of the baton down the generations. Some of the founders of Aboriginal country music are no longer with us, some having passed on since earlier iterations of the concert, which is based on the book and documentary of the same name by Clinton Walker. Those who are still with us, such as L. J Hill, are frail and occasionally forgetful, but Hill is still capable of passion despite his weakening voice, as he clearly demonstrates on ‘Pretty Bird Tree’ – once he is reminded which song he is supposed to sing.

Instead, we hear from the children and grandchildren of those groundbreaking artists, and from other artists they have inspired, while video projections at the back of the stage give us glimpses of their original voices and songs.

The performers are more than ably supported by The Backtrackers, a tight and accomplished backing band who drive the night forward with gusto and, when the occasion demands it, beautifully shaded intensity. Jason Wallker on steel guitar deserves special mention, evocatively underscoring T.J.Knox’s cover of ‘Ghost Gums’ (written by Knox’s late grandmother, Auriel Andrew), and adding extra poignancy to Leah Flanagan’s faultless and deeply moving cover of Bob Randall’s paean to the Stolen Generations, ‘Brown Skin Baby’, which ends with Flanagan singing acapella save for a soft, final wail of guitar. It’s a melancholy and beautiful moment, with the song a highlight of the evening.

After moving some of us to tears, Flanagan also rouses cheers with her low-key but direct criticism of the night’s sponsor, Santos, for their contentious involvement with fracking in the Territory. Doubtless some uncomfortable words were exchanged in the VIP section thereafter.

Later in the night come more upbeat performances, such as Luke Peacock’s performance of Mop and The Dropouts’ ‘Brisbane Blacks’, and the showman-like swagger of Roger Knox.

Musical Director Brendan Gallagher says at one point of the evening that country music is sometimes described as ‘three chords and the truth,’ and it’s certainly true that country music seems more than appropriate as a soundtrack for the Aboriginal experience. There’s pain and melancholy here, but also hope and resilience – and a whole new generation of singer-songwriters poised to carry the genre forward into the 21st century.

Garry Stewart’s latest choreographic work, made on the bodies of the Australian Dance Theatre’s ensemble, evokes the cycles of life and the forces of nature – birth and death, wind and rain, circadian rhythms, growth and decay.

Above the stage hangs a vast black ring – the cycle of life made manifest or a gateway to the afterlife? To the rear sit the musicians of The Zephyr Quartet, whose rich live score is mediated and mixed with Brendan Woithe’s electronic compositions, which range from whispering to thunderous. The musicians are joined by two vocalists performing a libretto in Kaurna, the Indigenous language of the Adelaide plains. Once lost, Kaurna has been resurrected from a dictionary compiled by two German missionaries; its presence in this work, developed with the assistance of language and culture consultant Jack Buckskin, speaks to the timeless nature of life on our arid continent, to persistence and endurance.

Lit exquisitely by Damien Cooper, the dancers enter clad in green tunics, one hand painted green, fists clenched around stones which appear repeatedly throughout the work. The Beginning of Nature seems literally grounded in the earth on which ADT lives and works.

Certain gestures repeat – arms connected in flowing lines, a held headstand evolving into a body that twists and flips like a fish out of water. Elsewhere the movement becomes less abstract and more literal, though a sequence where dancers growl, snarl and bite at the limbs of a colleague feels almost too literal an evocation of the animal world. Conversely, a routine in which two dancers maneuver their way across the stage, lips pressed together and long hair unkempt, renders them as almost androgynous everypeople in a striking representation of the eternal power of desire.

There’s more than a hint of religion – humanity’s attempt to understand the forces of the natural world by framing storms and floods as gods and wood-spirits – present in the work, and a use of props that ushers in some truly striking imagery: a spike-backed beast prowling across the stage, insects parading and waving antennae, water poured from a conch shell, a body taking shelter from the storm.

Not every sequence lands successfully. Dancers are not circus performers, and an audacious sequence late in the piece, in which the dancers climb atop one another and circle upon one another’s shoulders in a two-high ring feels more awkward than impressive. At other times the dancers move with fluid and dramatic grace, with Thomas Fonua particularly impressive in a series of muscular solos. Kimball Wong and Gabrielle Nankivell are also striking and assured performers.

Late in the piece, after a series of false endings, The Beginning of Nature seems to lose momentum, as if over-extending itself, but at its best it’s a potent, intelligent and visceral contemporary dance work.

It’s a good thing that Yolngu hip-hop artist Baker Boy was performing his set at The Lighthouse, Darwin Festival’s open-air venue in Civic Park, rather than a more traditional venue – because he would have blown the roof off a theatre.

Rapping in both English and Yolngu Matha language, his flows smooth and his energy infectious, Baker Boy and friends created an inclusive welcoming space – including an open space on the dancefloor late in the show where everyone and anyone was welcome to freestyle and show off their moves. Given the relatively low height of the Lighthouse stage, the onstage breaking was less visible, but this was a minor detraction in an otherwise engaging and spirited performance.

The night included a battle between DJ and live drummer, and extra instrumentation from a yiḏaki player to further enrich the live sound. Guest artist Dallas Woods, a Noongar man, added extra vitality and humour to the night. It wasn’t all high-spirited – the shameful fact that every single child held in detention in the Territory is Aboriginal was discussed – but the overall vibe was positive and high-spirited, with a focus on ‘one mob, one country’. Participants left sweaty, smiling and invigorated; the perfect finish to another Darwin night.