A remarkable fusion of Yolŋu culture and the Western classical music tradition performed under the stars for the festival’s opening night.
Richard Watts 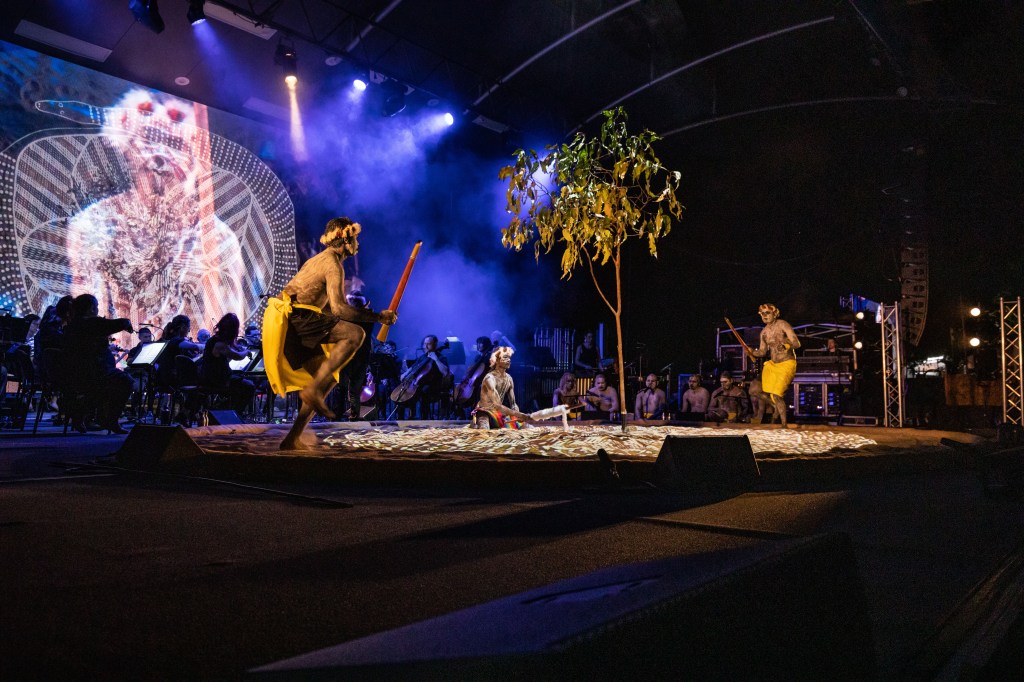 Buŋgul is a compelling blend of concert and ceremony; a rich evocation of Yolŋu life fused with the Western art music tradition. Photo: Helen Orr.

Aboriginal and Torres Strait Islander readers are advised that this review contains references to people who have died.

The multimedia concert Buŋgul which opened at Darwin Festival on Thursday night was far more that just a live performance of Yolŋu singer Gurrumul’s final, posthumously released album, Djarimirri (‘Child of the Rainbow’).

Performed at the Darwin Amphitheatre before a vast crowd – anecdotally, one of the largest ever audiences to attend the festival’s now traditional free opening night event – Buŋgul is a compelling blend of concert and ceremony; a rich evocation of Yolŋu life fused with the Western art music tradition, and in the words of Darwin Festival Artistic Director Felix Preval, ‘the largest-ever work Darwin Festival has ever commissioned’.

The concert began with a Welcome to Country by Larrakia elder Uncle Richard Fejo, whose heartening words reminded the audience, ‘We are all one community – we are all countrymen’. It’s a sentiment richly embodied in Buŋgul, which not only uses dance, music, art, film and song to bridge worlds and traditions – it’s also ‘an attempt to convey the Yolŋu world-view to non-Indigenous audiences’, as I noted in a previous review of the production.

Under the baton of conductor Erkki Velheim, the orchestra provide light, depth and shade to proceedings, strings dominating at one moment, brass in another. Simultaneously, pre-recorded footage screens behind the stage, illustrating the life and landscape of Elcho Island, Gurrumul’s home. Far more than just pretty pictures, the striking videography allows us to draw parallels between aspects of Yolŋu culture and the land itself – a line of ochre painted on dark skin echoing the curve of a river or the shades of shallow water versus deep water as seen from above.

A camera positioned above the stage, and another set further back in the amphitheatre, provide further perspectives, cutting seamlessly between live and pre-recorded images and enhancing our view of the performers – whether dancing, singing or at rest – at key moments throughout.

Read: Escape winter’s chill for a cultural feast like no other

By turns sophisticated, compelling and playful (with works such as ‘Djilawurr’ (Scrubfowl), ‘Ngarrpiya’ (Octopus) and ‘Djapana’ (Sunset) among the many highlights), witnessing Buŋgul performed on Larrakia Country under the stars was a very different experience from watching it in a concert hall. Voices called out in Language from the crowd in response to particular tracks, while especially enthusiastic audience members stood at the front of the stage, waving to the performers and calling out to them; a reminder that this is much more than just a traditional festival event – it is a celebration of the world’s oldest continual culture and an honouring of a beloved family member’s life and legacy.

Buŋgul (which was co-commissioned by Perth Festival, Adelaide Festival, Rising, Sydney Festival and Brisbane Festival through the Major Festivals Initiative) was created on Country in North East Arnhem Land. It was originally intended to open Darwin Festival several years ago, until the decision was made to delay the work in order to realise it more fully. The pandemic caused additional delays, meaning that this week’s Darwin premiere has been almost four years in the making.

Judging by the warm response of the crowd, the wait was more than worthwhile.

The writer was hosted by Darwin Festival with support by Tourism Australia through the Regional Arts Tourism Package. 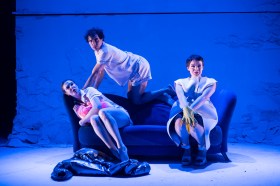 Euripides' classic tale as seen through Medea's children is flamboyant but muddied.