A transcendent meeting of musical traditions and a superb tribute to the life and artistry of the late Geoffrey Gurrumul Yunupingu.
Richard Watts 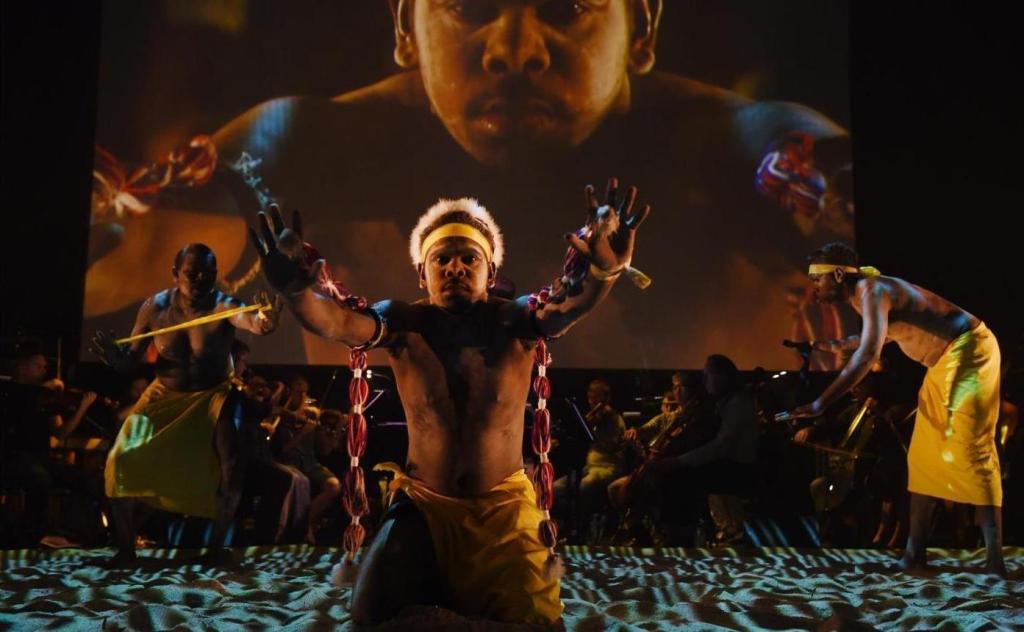 One of the very first performances at Perth Concert Hall, when the venue originally opened its doors for the 1973 Festival of Perth, was a Beethoven recital by Polish pianist Andre Tchaikowsky. Today we think of Beethoven’s oeuvre as belonging to an old and established tradition – but compared at least 75,000 years of Yolŋu culture, Ludwig van might almost have been writing yesterday.

Created on country in North East Arnhem Land, and featuring 32 members of the West Australian Symphony Orchestra performing alongside eight Yolŋu dancers and musicians, Buŋgul is a concert version of Djarimirri (Child of the Rainbow), the posthumously released album by Yolŋu musician Geoffrey Gurrumul Yunupingu, who died in 2017 aged 46.

More than just a concert, Buŋgul is an attempt to convey the Yolŋu world-view to non-Indigenous audiences; a blending of art forms without borders where myth and music, painting and storytelling, dance and tradition fuse into a seamless whole.

‘What we are going to give you is [Geoffrey’s] knowledge, his connection with the land,’ we are told at the start of proceedings. The performance which follows is dense and challenging, electrifying and beautiful.

Djarimirri fused traditional Yolŋu chants with the European art music tradition. Here we see the dances which accompany those chants performed live in an oval bed of sand placed centre stage, as Gurrumul’s amplified voice sings from beyond the grave.

A large screen to the rear intercuts between the dancers as filmed from above, traditional paintings, and luminous images of Gurrumul’s island home. Sometimes the recorded songs are accompanied live by a yidaki player and another singer or singers; at other times the focus is on Gurrumul’s angelic voice and the orchestra alone – moments of soft brass which reveal a gentler side to the sometimes-blaring instrument, thunderous drums and the haunting vibrato of tubular bells.

The interplay between the production’s carefully blended elements is striking and evocative, while the music is haunting and beautiful. For audience members like myself who lack the knowledge to interpret specific cultural references, aspects of production can sometimes feel frustratingly abstract and opaque, but such moments soon pass, aided by tracks such as ‘Djilawurr (Scrub Fowl)’ where the meaning of the dance is self-evident.

As the performance nears its conclusion, the blend of artforms and imagery, music and song reaches its pinnacle. First a luminous sun sinks below the horizon; then thunder peals as ‘Wulminda (Dark Clouds)’ begins. On the video screen we see what at first seems to be a lowering sky, pregnant with rain, only for the image to gradually reveal itself as Guy Maestri’s Archibald-winning portrait of Gurrumul himself. It’s a magical moment of transformation – an evocation of the man as mythic figure – and a more than fitting climax to this haunting and compelling evening.