Selina Jenkins’s mastectomy musical is a tender journey to the chest of one’s dreams.
Jinghua Qian 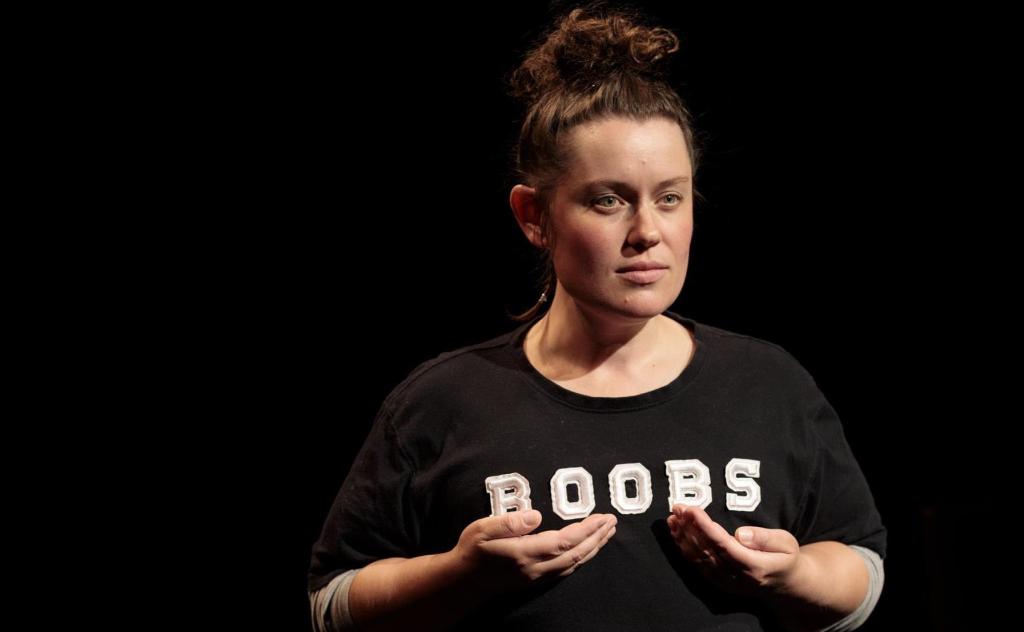 Previously, I’d only ever seen Selina Jenkins perform as her drag alter ego, Beau Heartbreaker, so I was curious to see her out of character in this autobiographical solo show. Boobs is a story that cuts close to the heart, literally: the show follows Jenkins as she gets an elective double mastectomy – full removal of both breasts, or top surgery – becoming the first woman in Australia to do so.

Along the way, we hear Jenkins’s musings on bodily autonomy and gender policing, both sung and spoken, and there’s even a sing-along portion, which on opening night the crowd seemed very ready for.

To get the surgery, Jenkins needs approval from a psychiatrist, but the psych can’t make sense of why a cisgender woman might not want boobs. Jenkins has to convince him to let her undergo a procedure that is normally only performed on trans men (and even then, trans men have to embody maleness and masculinity in a very specific way to get approval – I only know two trans men in Australia who have had top surgery without being on testosterone, for example). Jenkins highlights the double standards that apply to bodily modifications, depending on whether they reinforce or subvert social norms, as a flat-chested woman could get DD implants without going through a psychiatric assessment. ‘Take the tit out of identity,’ she sings.

Boobs won Best Cabaret and Best Feminist Work at the 2019 Melbourne Fringe and it’s easy to see why. It’s witty, thoughtful, and well-crafted, exploring some quite complex topics – such as how a handful of medical gatekeepers decide who is allowed to change their bodies, what changes they can make, and why – in an accessible and frankly delightful fashion. There’s no shortage of daggy puns, which is no surprise given the ample source material, and Jenkins’s gorgeous voice shifts seamlessly from stripped-back ballads to jazzy numbers (it turns out ‘boobs’ and ‘titty’ fit nicely into a sort of scat/beatbox rhythm).

Short and sharp at just 50 minutes, the show weaves together three elements: songs, monologue, and dialogue between Jenkins and the psych, whose disembodied voice broadcast through the theatre only reinforces the creepy Big Brother-ness of medical gatekeeping. The dialogue is powerful and illustrative, and the songs are superb, dealing with patriarchal control and the absurdity of gender binaries with humour while demonstrating Jenkins’s musical range.

The monologue (a combination of stand-up and storytelling) is mostly very successful, particularly when it also incorporates a little physical humour. Some parts are touching while others are thrilling: a balcony chase scene had me on the edge of my seat. But it gets a tad preachy at times, which left me wondering who this show is for. Those of us who are trans probably don’t need to hear it, and those who don’t get it probably aren’t at this show. Jenkins does earnest well – it’s sort of Beau’s thing too – but here it feels a bit like she’s trying to lobby someone who’s not in the room. Nonetheless, Jenkins is a star, and Boobs is an immensely likeable show.