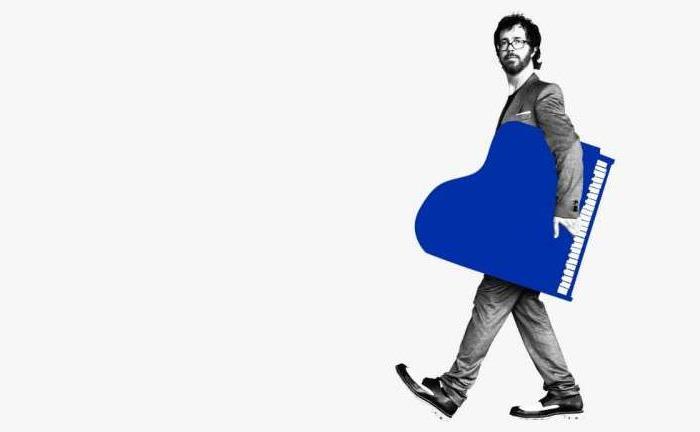 Folds is a born performer, a firecracker, a ball of energy and when it comes to audience participation, he has a surprising gift. He announced he was going to create an instant song. But could he really come up with a tune, lyrics and an orchestral arrangement mid concert? He doodled at the keys humming. The audience held its breath. Time stopped. Then, he demonstrated a part for the cellos, the violins and for woodwind, and got each section to repeat their part and conductor Nicholas Buc layered them up.

When the piano joins in, Folds sings a new version of ‘Happy Birthday’ for Clare Ramuscak, the contrabassoonist, because it happened to be her birthday. She was press ganged into sounding a growly ‘A’ on tap. Creating a spontaneous song is one of Fold’s best tricks. It’s certainly an ice breaker. On YouTube, there’s a session in which he does the same accompanied by the classical cellist YoYo Ma.

When he accompanies himself on the piano, his feet dance as if playing a drum kit, his left foot beating time, the right accented as it slams the pedal down. Folds studied percussion as a music student. Yet, he travels the geography of the piano at high speed, contributing convincing grabs of colour, spidery finger flurries and glissandi. At times, the piano is pushed into percussive service when he stands to deliver pounding chords or articulates a crisp counterpoint to his voice. He draws a helluva sound out of the grand, its voice clearly audible, however robust the orchestra became.

Yet, the narrative in Fold’s songs is as important as the appealing orchestral arrangements. It’s crucial to catch the songful stories, whimsical hooks, the ironies, the ditties and winsome reflections. During the first half, the sound stage was uncomfortably boomy. Folds’ falsetto strained to be heard against bounding, off-the-leash brass and big, clattery percussion. Orchestra and audience struggled to catch Fold’s wry lyrics. Maybe because audibility wasn’t the best initially, the connection between orchestra and singer in the first set smouldered rather than ignited.

After the interval was a different story. Had there been rallying words backstage? Because the energy soared, the magic kicked in. ‘Free Coffee’ was a high spot because Folds sang at the front of the stage and could be clearly heard. ‘And when I was broke, I needed it more. But now that I’m rich, I get free coffee.’ With a nod to the recent panic buying he sang, ‘Toilet Paper Heist’ and dedicated, ‘I Still Call Australia Home’ (a Peter Allen cover) to the firefighters and the human and animal bushfire victims. Balance between singer and orchestra was in sync. The latter’s rhythm deftly swung with Folds rocking, ‘You Don’t Know Me’ with an obliging crowd happy to sing a response to his ‘call.’

Folds is fun and big-hearted, and with a surfeit of charm, he transformed the concert hall’s formality into a joyful party vibe. The evening’s success sealed with a standing ovation.