Just as Beethoven’s Ninth blends instrumental music and choral music to thrilling effect, so too the fusion of orchestral music with contemporary circus.
Richard Watts 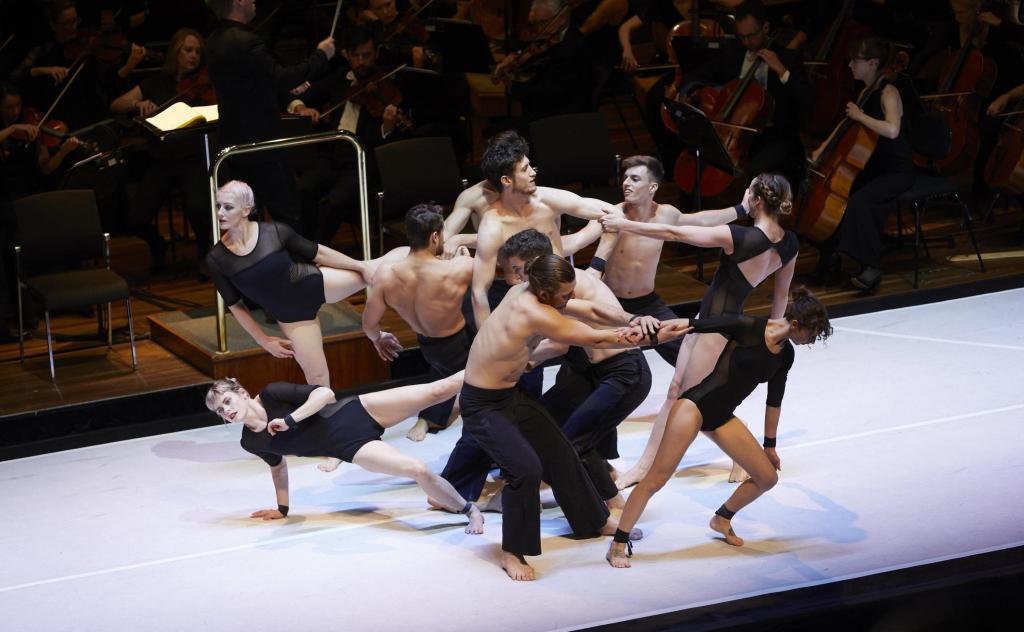 As the first notes of Beethoven’s Ninth Symphony sound out in Hamer Hall, a lone body rolls across the stage. More acrobats appear as the notes swell; the performers link hands to form a human chain which resonates with barely controlled tension.

Soon their bodies stretch and sway, leap and roll, rise up in fragile human towers before plunging to the stage, the thud of feet and tumbling bodies perhaps frustrating some music purists for whom the pairing of circus with orchestral music might prove an irritating distraction. Judging from the sustained standing ovation which met this work at its conclusion, however, the majority of audience members responded to this new artistic fusion with unbridled joy.

This year marks the 250th anniversary of Beethoven’s birth, with an array of the German composer’s works programmed by orchestras around the country in celebration. But rather than stand on tradition, the Melbourne Symphony Orchestra (MSO) commendably chose to open their 2020 concert season with a world premiere collaboration with Brisbane-based contemporary circus company Circa; a double bill which also featured the premiere of a new composition by Deborah Cheetham AO.

Cheetham herself opened the evening with an Acknowledgement of Country sung in the Boon wurrung language; one of 11 such pieces commissioned by the MSO and the first project of its kind in Australia.

A moment later, Cheetham’s richly textured Dutala – Star Filled Sky followed; an MSO commission responding to the Ninth Symphony. Replete with dramatic shading, at times tense or tremulous, at other moments almost declamatory, the piece evokes sunrises and sunsets, endings and beginnings, sometimes subtly referencing Beethoven’s masterpiece but very much its own work.

After a short interval, Circa and the MSO’s Beethoven 9 began with a projected sign asking the audience to withhold from applauding until the work is over – a classic exhortation from Circa’s Artistic Director Yaron Lifschitz, who apparently feels that sporadic interjections of applause disrupt the emotional intensity and tension of his work. Save for a short outbreak of applause after the conclusion of one movement, the audience otherwise sat in awed silence, respecting both Lifschitz’s exhortation and the skilful playing of the MSO under the baton of Principal Conductor in Residence, Benjamin Northey.

Like all Circa productions, Beethoven 9 blended moments of explosive dynamism with tension and poise. Responding to the symphony’s four movements, the acrobatics – initially focused on the 10 bodies of the performers before incorporating traditional circus apparatus including a hoop, aerial silks and trapeze – displayed a high level of skill as well as laudable gender diversity, including women as bases and pas de deux executed by same-sex couples as well as opposite-gendered couples. Elegant shifts in lighting – waves of light sweeping slowly across the stage, spotlights shifting to emphasise the performers’ shadows – further emphasised the skilled performances on display.

The production ended with a powerful moment – an informal evocation of community where half the chorus, dressed in everyday clothes rather than formal black, step out onto the stage to sing alongside the acrobats – a physical encapsulation of the themes of freedom and brotherhood evoked in the ‘Ode to Joy’ and a refreshing response to the sometimes formal nature of orchestral tradition.

This being the world premiere of a brand new Circa production, there is still room for improvement, with the extended staging of a trapeze act late in the piece dissipating some of the tension that had developed throughout the evening. Such quibbles aside, Beethoven 9 is otherwise a rich and thrilling demonstration of the emotional and choreographic potential of contemporary circus, juxtaposing moments of almost balletic grace alongside jaw-dropping feats of strength and skill, set to one of the greatest pieces of orchestral music ever written.