Review: An Enemy of the People, Belvoir

Melissa Reeves has crafted a play that speaks to modern concerns which are depressingly similar to 1882.
Judith Greenaway
[This is archived content and may not display in the originally intended format.] 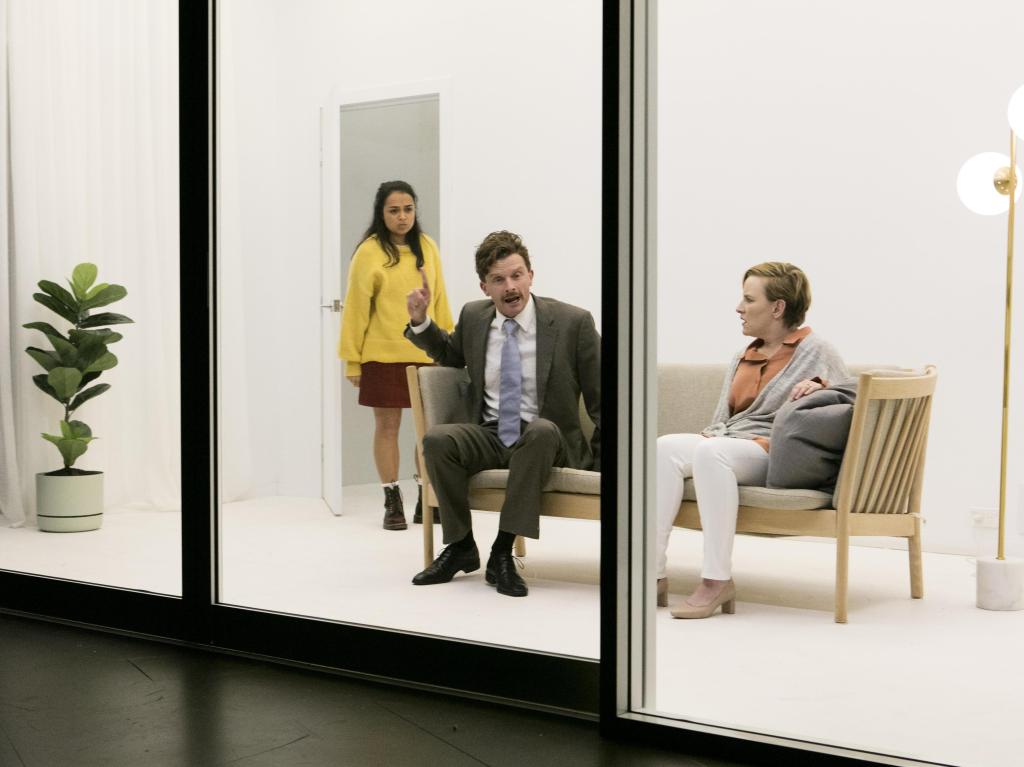 Nikita Waldron, Leon Ford, Kate Mulvany in An Enemy of the People. Photo by Brett Boardman.

When, in a moment of bruised despair towards the conclusion of An Enemy of the People, Kate Mulvany fells her character; compressed in that tiny foetal figure is the repressed rage of every person who has ever been bullied, insulted, ignored… and of every woman whose existence has been questioned. It’s a stunning image which vibrates with the door slamming possibilities of female resilience. This is a character for a modern world.

A Spa town has heavy metal in its water and a country doctor will attempt to fight the commercial and political interests that would silence her. After the original work by Henrik Ibsen, playwright Melissa Reeves has crafted a play that speaks to modern concerns which are depressingly similar to 1882. Environmental degradation, self-serving officials, corruption and cowardice lofted to the virtuous by patriarchy and privilege, there is no shortage of heavy themes. All of which are treated with dignity and the lightest of touches. Case in point is a gentle two minute speech about class which skewers modern day Australia with a gut churning truth that requires silence after it. Before the tension fractures with a laugh.

Kate Mulvany in An Enemy of the People. Photo by Brett Boardman.

While director Anne-Louise Sarks may describe the show a ‘comedy with a fierce political heart’, it is a comedy to tear at the heart with laughs that are constant, intelligent and character-based propelling a disappointment in humanity’s ethics and moral integrity. Fashioned with empathy as its driver, the production has a stunningly well-imagined second act that emboldens an irresistible engagement from the audience. The, usually rarely heard, verbal expressions of discouragement and outrage that emanated from the audience during the final scene is a direct result of the theatrical structure which empowers this remarkable ensemble cast.

Mulvany gives us a flawed heroine here. Her Doctor Stockman exhibits the scars of grief and of the passionate causes of youth, served up with an unabashed need for positive ego strokes. Mulvany’s work is microscopically detailed to a cellular level. Expressions flash across her face as Stockman processes events. In the seconds after an unexpected kiss: a world of bewilderment and when faith in humankind crumbles, her physicality brilliantly expresses a constant imminence of explosion.

Particularly around her brother, and town mayor, Peter (Leon Ford). Ford is equally impressive and their scenes together crackle with history. His paternalism early on is gratingly understandable in a filial context and even after the gloves have come off, his sibling instincts give him a slight pause of overprotectiveness. Which extends to his niece, Petra, delicately played by Nikita Waldron with a robust throughline of compassion and a youthful appetite for justice. Highly affecting also is Catherine Davies performance as Randine. Hard work and monetary negotiation are vital skills and the character’s reserve and politeness smoulder with a weariness of backstory reflecting the practicalities of political impotence.

Kenneth Moreleda in An Enemy of the People. Photo by Brett Boardman.

Reflection and transparency are explored also in the set design which incorporates a glassed-in room with a mirrored end reflecting a rear hallway. With white walls and a suitably Scandi sofa it has a large expanse of forestage which is effectively used by Sarks to give the production the dynamic power of closeness to the audience. Also reflecting the pared back palette is the analogue lighting rig which is frosted, seldom coloured and discretely used. Particularly exciting in a production context is the costuming where the straight lines of politics and dogma confront the coloured blocks of interpersonal conflict in a subtle mirror of event and emotion. The emotional content further enhanced by a music score, sparely used, where the bass of strings converses with the light piano and intimidating drum.

An Enemy of the People has standalone excellence as a new work. Vested as it is with a reverence of theatrical history and a contemporaneous agitation for equality, it rises with an extraordinary performance falling into its centre to be an unmissable night at the theatre.