The National Gallery of Australia had one of the largest acquisition budgets in the world in the 70s. A new exhibition forces us to question the value of the arts today.
Gina Fairley
[This is archived content and may not display in the originally intended format.] 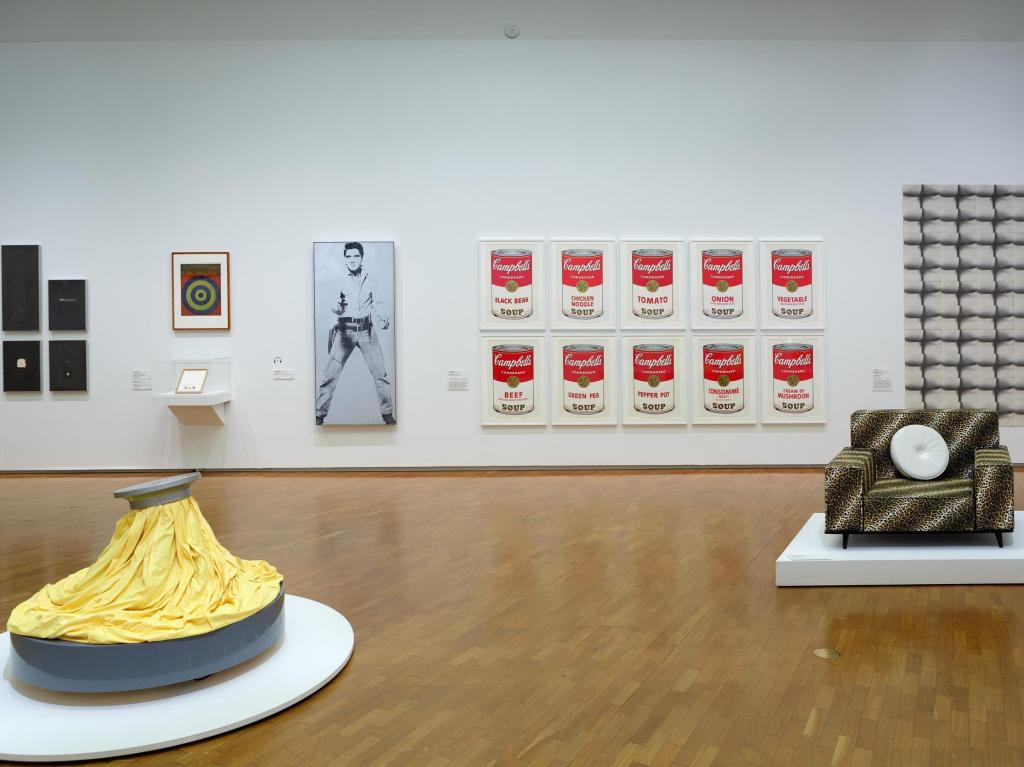 Installation view of American Masters at the National Gallery of Australia, Canberra.

Most Australians know Jackson Pollock’s Blue Poles (1952) – it was that painting that caused a national outcry in 1973. It was the most expensive painting purchased in Australia at US$2 million (then equivalent to AU $1.3 million). What most people don’t know is that also, at the time, it was the most expensive American painting ever sold, and the purchase hit international headlines.

Prime Minister Gough Whitlam, wrote across the request for the purchase: “buy it and disclose the price”.

The need to “capture” Pollack’s last major drip painting in private hands, however, is part of a much bigger story. As NGA Senior Curator International Paintings and Sculpture,– and curator of the Gallery’s new American Masters 1940-1980 exhibition – Lucina Ward said, the motivation for the Gallery’s acquisition program needs to be examined against the social and political context in the mid 1970s and early 1980s.

She quotes James Mollison – who had been employed to develop a Collection for the new Gallery:  “The 1970s were expansive years for Australia. Our ambitions were high, reflecting the confidence of Australia at the time.”

Ward makes the point of that incredible moment in Australian art history: ‘Two important exhibitions surveyed modern movements and highlighted tendencies in abstract art: a touring show from New York’s Museum of Modern Art, Two decades of American painting 1945-65, seen in Melbourne and Sydney in 1967, and The Field at Victoria’s National Gallery in 1968, the inaugural event in the new building on St Kilda Road. Both were highly influential.’

Curiously, the National Gallery of Victoria is currently showing MoMA at NGV: 130 years of modern and contemporary art, and have recently closed The Field Revisited. It is also a curious timing given the NGV and Art Gallery of NSW are preparing to build new destination galleries, and are undoubtedly collecting for those new spaces.

It is a thoroughly modern deja vu moment. The point of difference here is that American Masters 1940-1980 is drawn exclusively from the NGA’s Collection. That is a staggering legacy, and this is the first time in that long history that this Collection has been presented together – another staggering fact.

More than 75% of the works of art in the American Masters exhibition, which recently opened at the National Gallery of Australia in Canberra, were purchased before the Gallery opened in 1982.

The exhibition; the legacy

Walking into the exhibition the first impression is it feels congested – the works are hang tight, often placed high or stacked. But this makes perfect sense. Ward has not only captured a roll call of this time in history, but also its aesthetic zeitgeist. This is how one would have viewed these works in the 1970s and 1980s.

We seem to want more space today, and viewing this exhibition, one might ponder whether that is always the best answer. These pieces bounce and jive; the space is energized at moments, and then at others offer a calm and consideration. The art is palpable – not just because they are “recognizable” or the stuff of “art stars” – but because it is just damn good art.

Among the first paintings encountered is Willem de Kooning’s Women V (1952-53) purchased in 1974 – and second to Pollock’s Blue Poles, to be signed off by the PM given its price tag. Just a year after Pollock, it sewed even deeper public scrutiny and controversy in the misspending of national funds.

It’s presented alongside iconic works by Hans Hofmann, Fritz Glarner, Josef Albers, Mark Rothko, Ashile Gorkey. What a first impression. In the second half of this first gallery, sits another Rothko, Lee Krasner, Clyfford Still, and a sculpture by David Smith alongside Blue Poles.

While this sort of mind-blowing account can be given for each room one enters, the more interesting journey to take through this exhibition is via the dates. The pace with which these works were acquired – often soon after their making – is mind blowing.

As NGA Director Nick Mitzevich put it: ‘The new National Gallery in Canberra was emphatically modern… the collection of postwar and contemporary American art quickly grew to become one of the most important outside the United States of America.’

Critic Robert Hughes mused in an ABC interview with James Mollison, who had been charged to develop a Collection for the new Gallery.  It was 1976, three years after the Pollock purchase and still six until the Gallery was to open.

‘Australia needs this Collection because it needs a sense of other cultures in relation to its own, wrought forth on the walls at the highest possible levels of quality and connoisseurship. Those being the circumstance, I think that in ten years’ time we are not going to be standing around and thinking it cost us too much.’

I would argue that we need this exhibition now – to remind us how terribly wrong we have gone.

Today, our state institutions don’t have acquisition budgets of any weight, largely reliant on donations and philanthropy to acquire new works into their Collections. How did the National Gallery of Australia come to have one of the largest acquisition budgets in the world in the 1970s?

The back story is that in February 1973 the CAAB (Commonwealth Art Advisory Board) was replaced by an Acquisition Committee made up of artists James Gleeson (Chair), Fred Williams, Clifford Last, Leonard French, and Mollison. That artists were in charge of this massive vision was laudable in itself.

Ward explained: ‘An ambitious, and aggressive, program of acquisitions followed; the Gallery’s building was then expected for completion in 1976-77 and there was concern that the huge display spaces would not be sufficiently populated.

‘In April 1973, at its third meeting, the Acquisition Committee agreed to put to government an extraordinary bid for $5 million for acquisitions, of which almost half should be earmarked for purchased of ‘International Art of the Modern Period’. The gallery received $4 million,’ writes Ward.

This exhibition captures that incredible ballsy moment of trust and value in the arts. In today’s climate, we have a lot to learn from looking back – to walk around this exhibition and see what that kind of belief in a creative nation can look like.

It starts with Sol LeWitt’s huge Wall drawing No. 380 a-d 1982 (purchased 1987), specially re-made for this exhibition. These works take a commitment to collect and show. The exhibition also shows that this acquisition journey also collected artists in depth – Philip Guston, Louise Bourgeois for example, are represented by several works.

Celebrated American curator Robert Storr notes in his monograph on Louise Bourgeois – several of whose works are presented in the exhibition – that the Gallery’s purchase in 1981 of her flesh pink sculpture C.O.Y.O.T.E (1947-48), ‘in the context of acquisitions such as Blue Poles and Women V, placed Bougeois with her “generational cohort” and signaled a renewed interest in the artist’s work’.

It is another reason to see this exhibition. To have a good think about how you – as a viewer, and collective owner of this national collection – want to value the arts in our times.

Presented with the support of the Terra Foundation for American Art