Review: Above Ground at Riverside Theatres

Form Dance presents a thought-provoking visually striking double bill of contemporary dance.
Lynne Lancaster
[This is archived content and may not display in the originally intended format.] 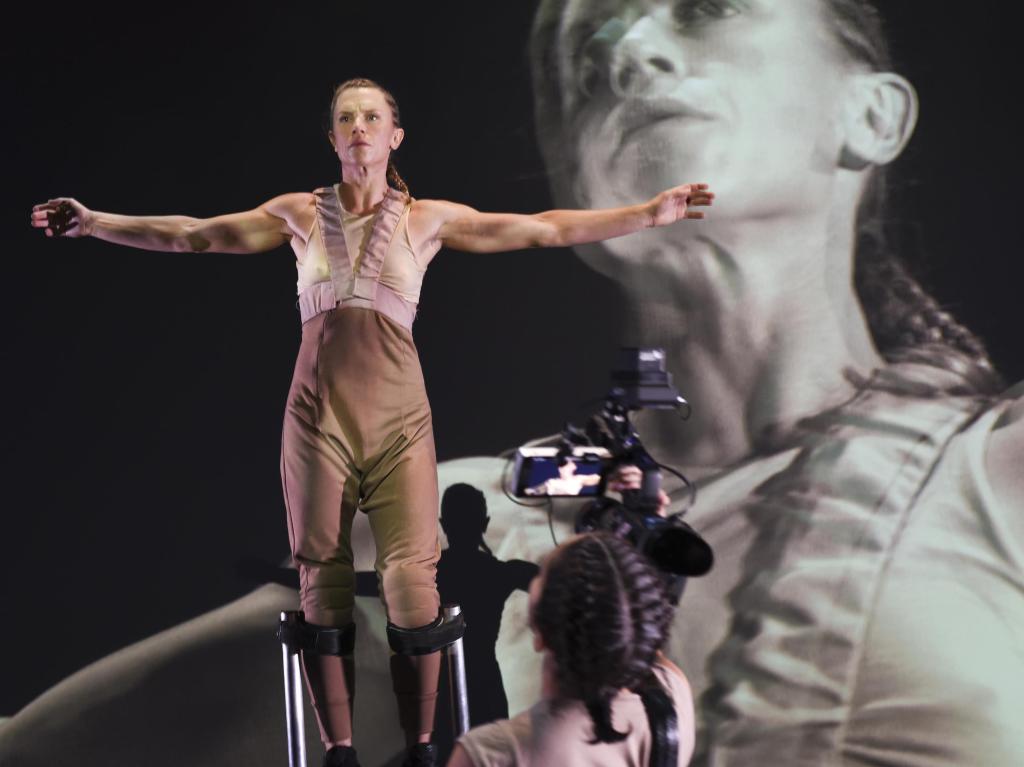 Under the umbrella title of Above Ground, Form Dance brings us the latest in the Dance Bites series  – two challenging works: Soft Prosthetics And Metal Gods and Cat’s Cradle.

Soft Prosthetics And Metal Gods devised and performed by Kathryn Puie and Lux Eterna included much use of technology and film. It begins with both dancers slowly rolling and moving on the floor. The atmosphere is somewhat futuristic and intense. The prosthetics –  camera tripods that eventually turn into stilts – are used by both performers. Puie and Lux Eterna weave and pulsate like machines with the assorted prosthetics, at various points forming a triangular tableaux. The prosthetics appear to be dangerously whirling helicopter blades, although at first are used as crutches (reminiscent of Antony Sher’s landmark Richard III for the RSC). Eventually Puie is firmly buckled into what are revealed to be stilts.This extends the line of the body quite considerably and allows for unusual partnering and striking balances. At one point the stilts are worn almost as pointe shoes as Puie performed a bourrée (if my observation was correct) across the stage.

Musically the soundscape by Ashley Scott snaps, crackles, pops and includes the sound of a gong. Lux Eterna controls the camera at all times – there are lost of intense closeups of both performers, (so we see the effort involved in the choreography and the concentration on the body, the way a foot or arm or head moves for example), kaleidoscopic images are used and she also films the audience. This was a fascinating example of how prosthetics can extend, challenge and develop the body.

Cat’s Cradle by Legs on the Wall as performed by Angie Diaz and Macareena Brevi was striking and utalised some dramatic, visually stunning images – but was rather strange and disturbing. Was it about bullying within an intense relationship? Were Diaz and Brevi the good /bad halves of a soul? It was evident that there was a heightened relationship between the two. The electronic soundscape by Zackari Watt is at times deafening as it beeps throbs and hums, making use of sharp staccato rhythms.

The set on Cat’s Cradle is dominated by a hanging cascade of ‘tentacles’ – hence the title.The two performers ‘float’ in the tentacles hanging upside down. It’s as if they are mermaids caught in seaweed at one point. Cat’s Cradle is more ‘physical theatre’ than ‘dance’. There are rippling arms and some extremely intimate partnering contrasted with a taut atmosphere during the fight.