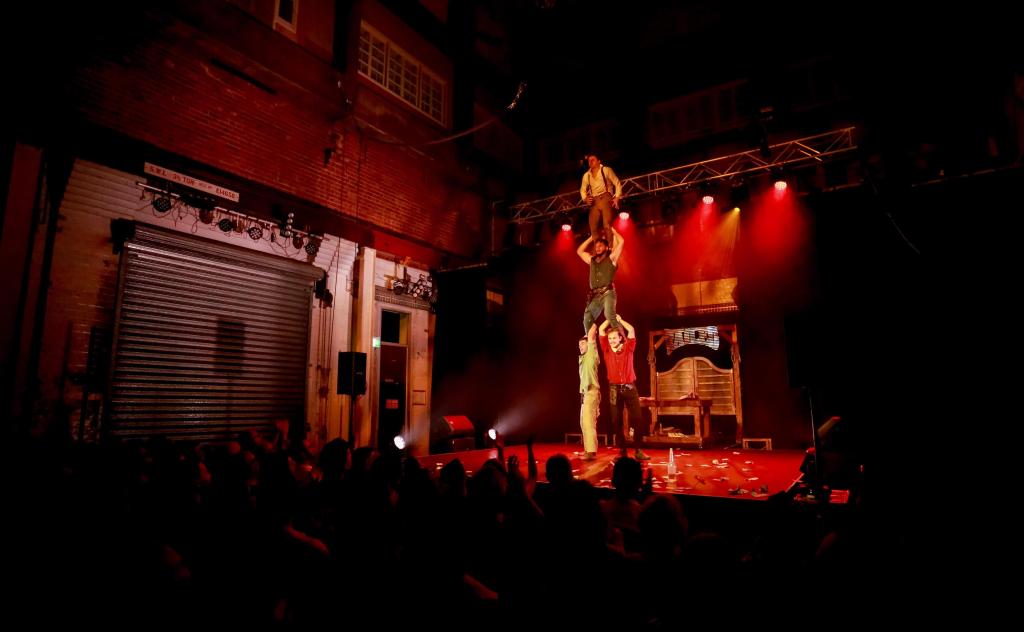 Their Instagram bio lists ‘flips, tricks and naughty bits’ and that, along with a generous dash of slapstick comedy, pretty much sums up the latest offering from the Head First Acrobats.

The opening night performance of their western-themed circus show Railed was a boisterous and rowdy good time, devoid of any airs and graces and possessing an element of controlled chaos – all in a good way.

Based in Melbourne, the Head First Acrobats last visited Brisbane with their hit Elixir (which won the Best Circus and Physical Theatre award at Adelaide Fringe 2018). This new show had its debut earlier this year at Perth’s Fringe World and is being performed now at the Brisbane Powerhouse as part of their Wonderland Festival.

While this is a genre that puts physical performance front and centre, Head First Acrobats have championed the importance of a strong narrative. However, with Railed, they have admitted their focus was more on having fun – and the audience doesn’t mind one bit.

The setting is the (very) wild, Wild West and the premise is that the cast are four cowboy bandits on the run after a successful bank heist.

They hole up in a saloon to celebrate with plenty of drinks which – in the words of the creators – leads the quartet to ‘fight, get rowdy and overtly sexual with each other and the crowd’.

While there are comedic overtones (all the performers take on fundamentals of rodeo clowns) and elements even of burlesque, Railed is first and foremost a showcase of the physical skills of the performers.

In a compact, hour-long show, they pack a lot in. There is balance on show with ladder work, tricks of co-ordination with skipping ropes, the strength of balancing on chairs, some impressively graceful aerial work, as well as circus staples such as juggling and diabolo and a display with a Cyr wheel.

Other skits involve card tricks and some adults-only ‘horseplay’ with a mattress.

Gloriously camp, full of innuendo and then some (this is not a show for young kids or the faint of heart!), this show provides some mindless fun and physical marvels.

In all, the troupe also look like they are enjoying performing for the crowd as much as the audience is enjoying being part of the show (there is some audience participation involved –don’t sit too close to the front if you don’t want to get wet), which is always great to see. The overall production is energetic and upbeat, aided by a well-thought out soundtrack which much like the rest of the show mixes comedy and fun.

Colleen Edwards is a Brisbane-based reviewer for ArtsHub.