A most exciting concert by the Sydney Wind Ensemble at the Mosman Art Gallery.
Lynne Lancaster 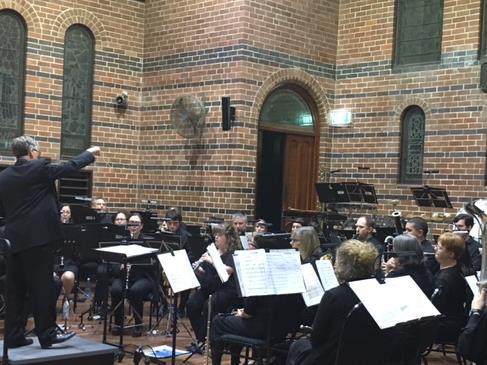 The Orchestra dominated the Hall and for each piece there was a photo – often of Opera Australia productions – with the title of the appropriate opera. Musical Director and conductor Mark Brown welcomed us and introduced some of the pieces (and later, others were introduced by tenor Benjamin Oxley). Under Brown’s direction – his conducting is precise, rather finicky and restrained – the Orchestra was in inspired and in excellent form. For each of the works there was a photo or two projected on the screen stage left.

Purgatory – A Chamber Opera opened explosively with the overture Glinka’s Russlan and Ludmilla. It was a stirring performance and executed at a brisk rather breathless pace.

The bulk of the first half was the Australian premiere of Philip Rugel’s short chamber opera Purgatory. It was also the world premiere of the work in this particular orchestral setting. The two soloists were Judith Rough and Benjamin Oxley. Purgatory is based on Yeat’s play but features an Old Woman (Rough) rather than an Old Man, and her son (Oxley). We were transported to a country road where visions of an old house and a symbolic dead tree create harsh memories for the Old Woman. Are they already ghosts? Or it is her memories? A Poe-like tale enfolds of guilt, murder and revenge.

Oxley as the boy was menacing, caressing his dangerous knife. As the Old Woman, Rough was splendid, torn and tormented in black.There was a stormy, chilling opening and most effective use of red lighting to represent the burning house, and a most atmospheric photo of a dead tree.

Rugel’s score at times perhaps reminded me of some of Britten’s work. There is unexpected sudden violence and a wonderful evocation of thundering horses. In this hypnotic work the performances are stark and powerful and can give you goosebumps with a shattering, very tense ending.

In complete contrast was the Rossini overture to The Barber of Seville darting, sparkling joyous and much fun, which took us into interval.

The second half opened with a fiery relentless version of the famous Ride of the Valkyries from Wagner’s Ring Cycle in a shimmering, flowing performance. You could see in your mind’s eye the women on their flying galloping horses in the stirring, crashing music.

Next was the passionate, tempestuous Leibestod also by Wagner from his Tristan and Isolde; swirling and cascading, saturating the audience in a wall of sound. In some ways being a wind orchestra this actually had a rather jazz feel but was an almost overwhelming sea of passion. ​Then came the love scene from Puccini’s La Boheme. The singers were tremendous and we were dazzled by their lyricism and magnetic passion.

Oxley then introduced his colleague, baritone Joshua Rogers, who sang a darker, deeper version of Nessun Dorma (from Turandot). Rogers has a tremendous dark chocolate velvety voice but was perhaps a bit overwhelmed by the Orchestra’s volume. We then heard the captivating Spanish rhythms of Lara’s Granada, also sung by Rogers.That bought the concert to an official close but the audience demanded an encore and we were treated to a sparkling ,delightful version of the Brindisi (drinking song) from Verdi’s La Traviata led by the Oxleys.