Something quite different for fans of burlesque.
Nerida Dickinson 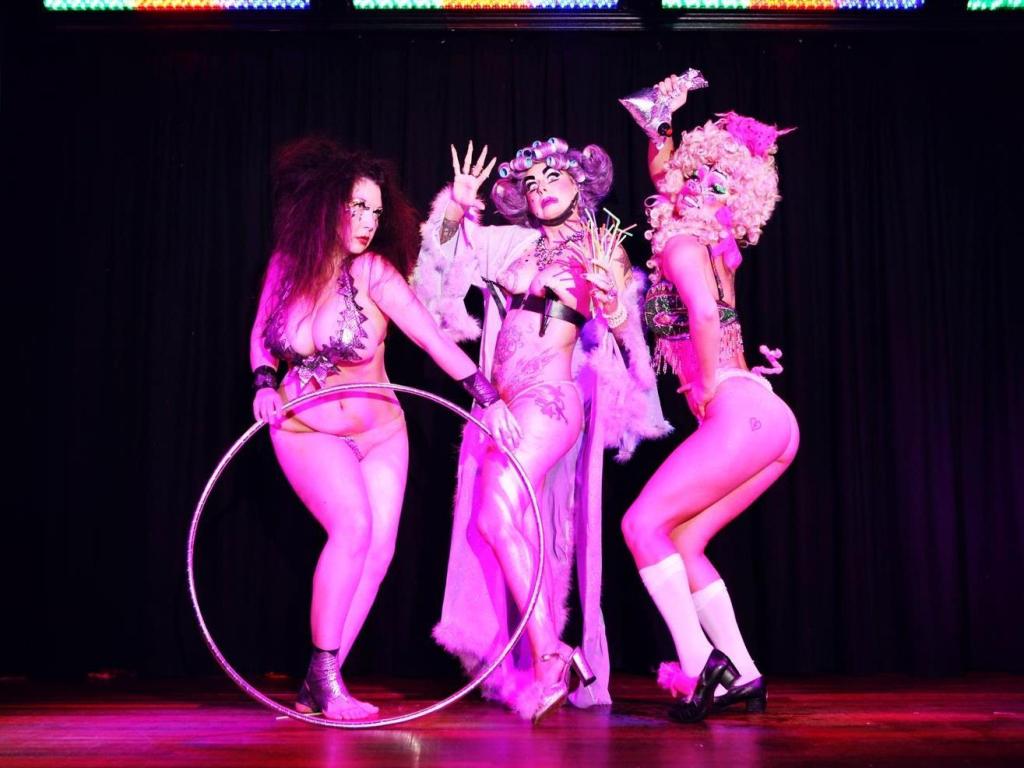 Opening with a surreal dance that plays with perception, featuring performers wearing masks and latex breasts hanging bare – only to be revealed as the performers’ backs – and with grotesque masks hiding their faces, Pretty Peepers is not standard light-hearted titillation. While familiar points of burlesque, such as dance, strip, physical agility and classic music references are covered, Pretty Peepers has turned everything on a slight tangent from our usual reality.

Dance skills of all three performers are remarkable, but pure admiration is overshadowed by the aura of menace evoked by a Cruella-de-Vil-meets-Norma-Desmond-meets-Norman-Bates interaction with the audience by Glitta Supernova. A later routine moving from, ‘Would you rather be a Mule?’, to MTV’s finest showcases, not only presents tap skills mashed with bump-and-grind, but also introduces strong animal themes based around an intriguing pig face and a curly-tailed G-string by Betty Grumble. A home movie featuring ‘Mitzi Mitosis’ as a Porn Bunny proves a little strong for some in the Spiegeltent, with many averting their eyes or taking the chance to hit the bar. No one seems to leave, though, with a witty plant-themed ‘strip’ featuring a Venus flytrap costume and various insect puppets gyrating to ‘Venus’, drawing some laughter and much confusion.

The parts of the show that are definite hits are Kira Carden’s hula-hoop performances. Carden’s sexy control, confidence and strength draw applause throughout the routines, with her remarkable costumes being works of art in themselves, taking inspiration from spiderwebs and fantastic monsters. There is no feeling of repetition, the sequences being not only performed to a high standard, but also designed with intelligent progression that matches music, lighting and the dazzling smile that makes it all look so easy!

Glitta Supernova closes with an Avon lady strip that deploys a great many of the English languages words and terms for genitalia and arse, closing with a reveal that has some gagging and many laughing with a visual pun that has particular topical relevance in Perth during the current shark cull. The overwhelming feast of sound, light, frantic motion, surreal costumes and absurdist humour proves a little too rich for some, but seems perfectly placed at Fringe World, pushing boundaries of skill, humour and taste.