A never before seen opera in Australia given the surreal Kosky touch.
Humphrey Bower 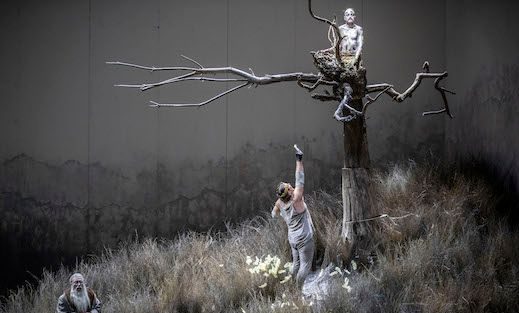 The meticulously realised set of The Golden Cockerel. Photo by Jean Louis Fernandez.

In common with many 19th century Romantic artists, Russian composer Rimsky-Korsakov was a political liberal as well as being devoted to the revival of national, ethnic and folk traditions. His final opera was completed in 1907 but (unsurprisingly) encountered problems with the censors and was first performed in 1908 after the composer’s death. The libretto is based on a poem by Pushkin about an ageing and paranoid Tsar who invades a neighbouring country (imagine such a thing happening today!) at the prompting of a golden cockerel that warns the Tsar whenever his kingdom is in danger. The opera is a satirical critique of Tsar Nicholas II’s imperial ambitions: in particular the Russo-Japanese War of 1904–05, which led to a humiliating Russian defeat, increasing social unrest and ultimately the First Russian Revolution of 1905.

Barrie Kosky’s production for the Komische Oper Berlin (co-produced by the Festival of Aix-en-Provence, Opéra National de Lyon and Adelaide Festival) was first staged in Aix in 2021 (well before the current invasion of Ukraine) and is set in the timeless world of the director’s imagination, which combines elements of Russian and Jewish folklore, surrealism, German Expressionism, burlesque cabaret and H.R. Puff n stuff (giant puppets feature heavily in much of his work).

To be sure current events loomed large over the evening’s proceedings, especially with British-Ukrainian bass-baritone Pavlo Hunka singing the role of Tsar Dodon; Russian soprano Venera Gimadieva as the Queen of Chemaka; Russian mezzo Alexandra Durseneva as the Tsar’s housekeeper Amelfa; Russian bass Mischa Schelomianski as the Tsar’s chief general Polkan; and Russian tenor Andrei Popov as the Court Astrologer. However the most striking interjections came from someone in the rear stalls who called out several times during the performance in Russian or possibly Ukrainian – most notably shouting what sounded like ‘Long live Ukraine!’ at the moment when the Tsar cuts off the Astrologer’s head and a fountain of blood spurts onto his chest.

That said, there were also memorable contributions from the singers, including Gimadieva’s dazzling lyric soprano; Durseneva’s thrilling deep-chested mezzo; and Popov’s piercing high tenor (including at least one laser-like burst of falsetto). Special mention should also be made of the chorus (often a feature in Kosky productions) who played the Tsar’s army clad in horses’ heads and tights (costumes designed by Victoria Behr) and tap-danced almost as well as they sang (choreography by Otto Pichler); the quartet of dancers dressed in spangly costumes and gas-mask-shaped headgear as the Queen’s ‘slaves from the Orient’; and actor Matt Whittet as the Alien-like cockerel in a golden bodysuit, long restless claws and one high-heeled shoe, who was mostly perched in a gnarled dead tree and whose ghostly offstage voice was provided by soprano Samantha Clarke. There was also a skeletal death-horse on wheels (with a severed human head on a spike) that served as the Tsar’s battle steed and looked like it had emerged from Picasso’s Guernica.

The meticulously realised set (designed by Rufus Didwiszus) featured undulating mounds or dunes, pockmarked with clumps of dry grass and the aforementioned dead tree. Frank Evin’s silvery and sharply etched side-lighting made this appear like a moonlit dreamscape, an effect reinforced by having the Tsar dressed in long johns and a toy-like crown reminiscent of Max in Where The Wild Things Are.

Conductor Arvo Volmer and the Adelaide Symphony brought a similarly dreamlike sheen to Rimsky-Korsakov’s score, with its lavish use of orchestral colour, chromaticism, the whole-tone scale and other ‘orientalist’ effects. However the dramaturgical inertia of the libretto and the two-dimensionality of the characters (especially the doltish Tsar) failed to hold my attention over two hours with no interval. The gloomy changelessness of the set also seemed somewhat at odds with the score and only added to my sense of longueur.

Nevertheless certain images linger: most indelibly, the cockerel plucking out and swallowing the Tsar’s eyes in the final Act, followed by the Astrologer singing the epilogue with his severed head in his hand and then slowly departing upstage through the hills like Goya’s Colossus. If only Vladimir Putin and his advisors would do the same.

Composer: Nikolai Rimsky-Korsakov
Libretto: Vladimir I. Bielski
Based on the tale in verse by Alexander Pushkin
With Adelaide Symphony Orchestra and Adelaide Festival Chorus

The Golden Cockerel was performed from 4-9 March 2022

Humphrey Bower is a Perth-based actor and theatremaker.