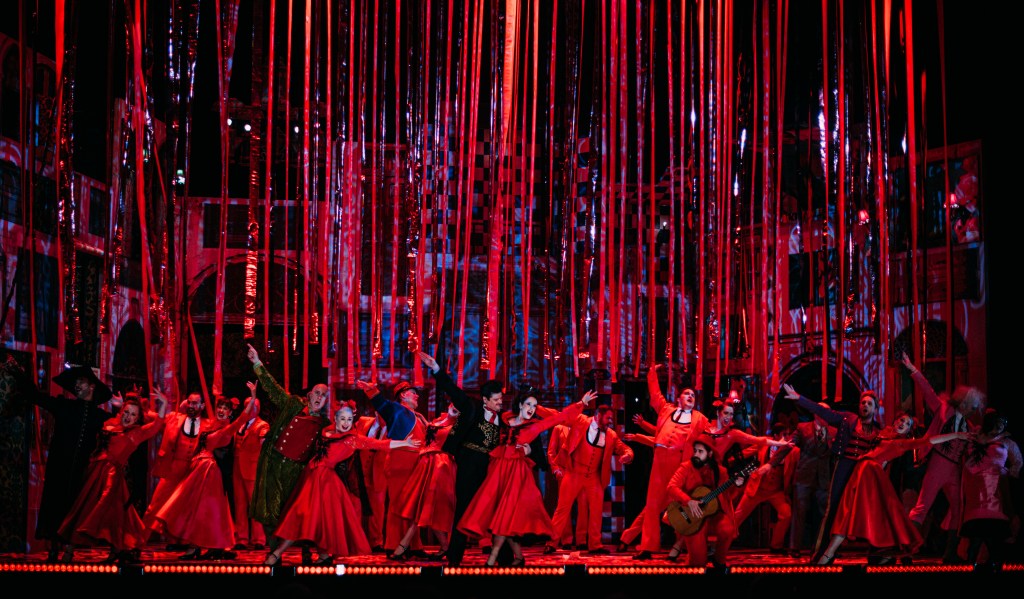 The Barber of Seville is ‘perfectly timed for the festive season and would be a wonderful introduction to opera for new and younger audiences.’ Photo by Soda Street Productions.

This new production of The Barber of Seville is a delight. It is big and bold, crisp and colourful, and allows us to forgive all the silliness and misogyny that is synonymous with the traditions of opera.

From the opening bars of the overture, played by the Adelaide Symphony Orchestra under the baton of conductor Graham Abbott, it is clear we are in good hands. The ASO were on the mark throughout, playing with sparkle and definition.

The Barber of Seville is playing at Her Majesty’s Theatre, due to the ongoing building works at the Adelaide Festival Centre, giving it an intimacy that lends itself well to the convolutions of the story.

The set and lighting design are engaging, with lovely colours and doors and windows that pop open unexpectedly. Curiously, the surtitles are projected on both sides of the stage rather than usual lettering above the stage. This actually makes them easier to read without taking your focus off the on-stage action.

Lindy Hume’s production seems to incorporate a vast range of musical and design influences from the opera’s origins 200 years ago to the 1930s and on to Elvis Presley, 1970s disco balls, and 80s punk.  There’s even a hint of zombies, of Johnny Depp and Tim Burton, and even Riff Raff from Rocky Horror if you look closely. It sounds chaotic, and it is, but it works. Hume has managed to create a contemporary visualisation while remaining true to the history of the work – something that is not easy to achieve.

As with so many operas, the story revolves around love and duty, class and morality. Interestingly, in this one, Rosina, the leading lady, is a more independent and determined young woman who knows her own mind, even though she is very aware of her place in society. Katie Stenzel, a warm and resonant coloratura soprano, captures the duality of Rosina’s strength and innocence and shows a flair for comedy.

Inevitably, The Barber of Seville belongs to Figaro – a smooth-talking cad, perhaps a womaniser and a conman, or maybe just a charming young man determined to make the most of his opportunities. He is the focal point of the story and the superstar of the moment, played with a flirtatious enthusiasm by the talented baritone Morgan Pearse.

As Figaro makes his dramatic entrance running though the stalls and leaping onto the stage, we know we’re going to have some fun. He’s cheeky, he’s funny, and he can sing. His opening aria, ‘Largo al factotum della citta’, ably demonstrates that Pearse is just made for this role.

Douglas McNicol is also strong as Doctor Bartolo, the guardian who has designs on Rosina and wants to secure her fortune for himself. McNicol is a familiar face and voice with State Opera and does the job here with a relaxed authority and a deft touch for humour. John Longmuir shows versatility in his playing of Count Almaviva and wins the audience with his serenade to Rosina.

Teresa LaRocca is almost wasted in the role of the maid. She is a fine comedic device but it would be wonderful to hear more of her masterful singing. She does have her moment, and handles it with a delightfully casual aplomb.

It has to be said that early in Act 1 there did seem to be some issues with projection and balance in the vocals, especially with the ensemble, but these seemed to disappear as the performance gained momentum. The State Opera Ensemble were excellent, with many familiar faces such as Catherine Campbell, Matthew Byrne and Jiacheng Ding. The big scenes really are a delight and imbue the production with a carnival feeling.

Nicholas Cannon, playing the supporting role of Ambrogio, deserves a special mention for attaching himself to a chandelier in Act 1 and hanging upside down as the other characters sing on around him, seemingly unmoved by his plight.

This delightful work is a co-production of Opera Queensland, Seattle Opera, and New Zealand Opera. It is perfectly timed for the festive season and would be a wonderful introduction to opera for new and younger audiences. Highly recommended.

The Barber of Seville will be performed until 20 November 2021