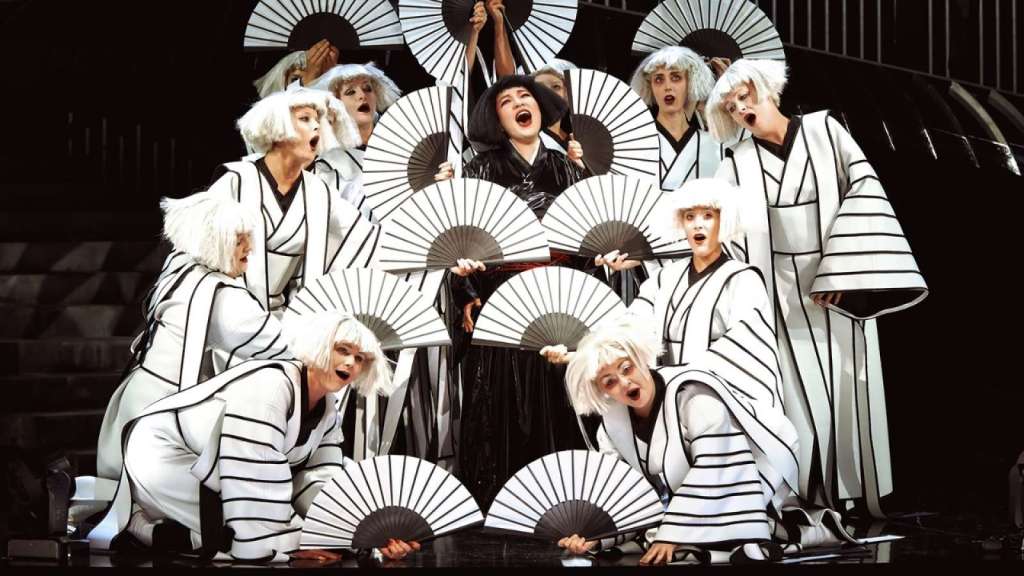 Madame Butterfly is both pretty and powerful. Photo by Prudence Upton.

Madama Butterfly is a highly stylised, sumptuously funded interpretation of the original Puccini ideation of the romance of the ‘Orient.’ Led by the magnificent Sae Kyung Rim as Cio-Cio-San and coming after the controversy surrounding Opera Australia’s ‘yellow-face’casting of Puccini’s Turandot earlier in 2022, with white actors in make-up to play the roles of Ping, Pang, and Pong, Madama Butterfly feels like a vital step forward to where this country’s opera sector is headed, and heralds that the organisation is listening and responding to decolonising opera.

The classic tragedy set in 1904 Japan centres on a young Japanese woman Cio-Cio-San (just 15 years old in the original) who marries an adventuring American scoundrel, Pinkerton (played by Diego Torre) and converts to Christianity. Her uncle finds out and forces the family and community to curse and renounce her. Of course, Pinkerton absconds back to the United States, and Cio-Cio-San waits faithfully, now with a son, for his return despite attempts to persuade her to marry again.

The revolving set works brilliantly to allow players to access and emerge while always seeming on a tilted precipice, mimicking Cio-Cio-San’s jilted predicament, and the forthcoming downfall. As the grande dame of Australian arts funding, to have the chorus first appear in suspended Shibari (Japanese rope bondage) signals a bold choice for Opera Australia. Likewise, the changing digital screen as backdrop modernises the production, switching all the time between the American flag, abstractions, and absent figures.

Suzuki (Sian Sharp), Cio-Cio-San’s maid, waits with Cio-Cio-San as Pinkerton’s ship comes back, three years later, only to discover that Pinkerton has a new American wife, setting up the pieces for Cio-Cio-San’s final horrific act of grief.

‘Un bel di vedremo’ or ‘One Fine Day We’ll See’, which is what every operaphile is waiting for through this whole, sometimes lagging in pace, performance, does not disappoint. Sae Kyung Rim is raw and magnificent. I had tears flowing, as did the Italian visitors behind me. I don’t think there’s anything comparable in opera to the grandiosity of the dramatic irony of foreshadowed emotional betrayal than that aria.

There’s considerable money poured into Graeme Murphy’s Madama Butterfly, and it is, suitably, very pretty and powerful. If you have never been to the opera before, this might be where to start.

Madame Butterfly will be performed until 30 July 2022