Touches of brilliance in this staging of a classic but lacks menace and urgency.
Gillian Wills 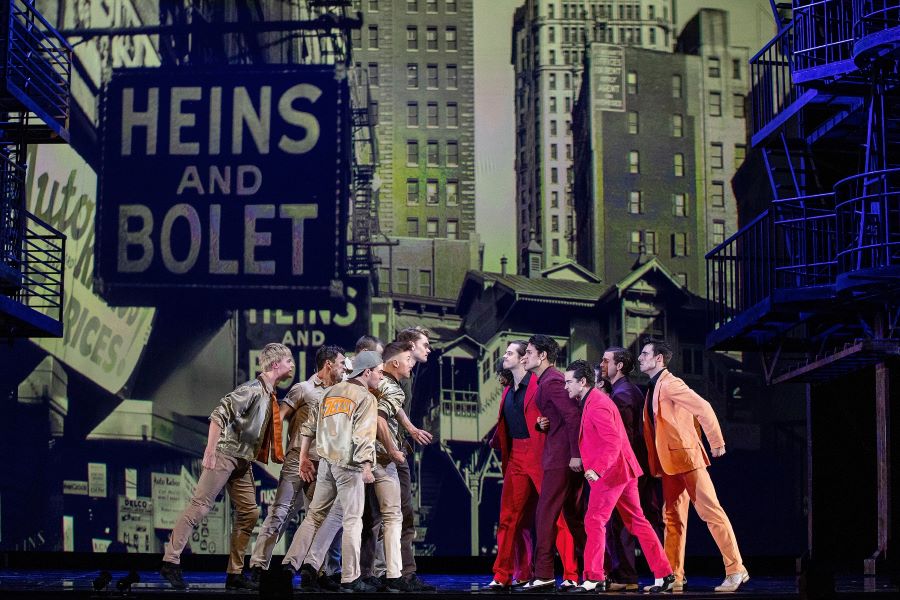 Rival gangs have a dance-off. Picture by Jeff Busby.

For the very few who don’t know, the musical West Side Story, based on a book by Arthur Laurents, is a spin on William Shakespeare’s play Romeo and Juliet. The plot explores the conflict between two warring teenage gangs of two different ethnic backgrounds: the white Jets and the Puerto Rican Sharks. When Tony, until recently a member of the Jets, falls for Maria, the sister of the Shark’s leader, tensions heighten and emotion runs high.

In its day, West Side Story broke new ground; it was a jazz-soaked blast outclassing saccharine siblings like Mary Poppins and The Sound of Music. Stephen Sondheim’s lyrics and Leonard Bernstein’s dazzling score were unapologetic, raw, rude. It was edgy theatre which peddled tragedy at its heart.

For music theatre fans, the show is a high-octane melodrama with bold dance routines and a great score.

And in this production, there were certainly many ‘Wow!’ moments. The superb dancing routines by the gangs during the prologue was epic 1950s street dance. With heart-in-the-mouth execution, the male dancers travelling in tight unison, jumped high and elevated everyone’s expectations.

All credit to the band directed by Isaac Hayward. The exacting, sympathetic conductor coaxed tenderness, danger, fear and cut and thrust drama from the band during exchanges between the Jets and the Sharks. When the momentum dwindled during, for instance, the three women’s rather lacklustre ‘America,’ the conductor stoked wild grooves in the pit, driving incisive, spiky articulation to conjure the necessary boiling riffs and pizzazz.

Hayward’s engagement was so intense, no-one would have batted an eyelid if he’d stormed the stage and taken the place of one of the triple-threat cast. However, with only three women dancing and singing – and one a reticent dancer at that – ‘America’ was bound to fall short of the hell-raising chutzpah the number requires. Why not let others boost the singing from the wings?

The staging consisted of projections of old photos of the seedy side of Manhattan where the story is situated and the moveable scaffolding had authenticity and flexibility. It worked as an elevated balcony for Maria during the flirting and coy banter with Tony, a set device borrowed from Romeo and Juliet.

Nigel Huckle (Tony) and Sophie Salvesani (Maria) sang well and channelled their roles plausibly. Salvesani delivered the classics so immortalised in our culture, including, ‘I Feel Pretty’ and ‘Tonight’ with believable charm and scaled the higher reaches of her songs’ theatrical crests with ease. Huckle’s Tony was believably in denial about the potentially lethal fallout between the Jets and the Sharks, while he professes love for Maria, the sister of the Sharks’ leader Bernardo (assuredly conjured by Temujin Tera.)  Though Salvesani and Huckle showed promise, and his ‘Something’s Coming’ bristled with optimism, the sexual tension of their forbidden love – and the cause of all the tragedy-hungers for extra spark.

Cameos by Beryn Schwedt as officer Krupbe and Paul Dawber as Lieutenant Shranke came across as avuncular rather than mean. Was that intended? Noah Mullins as Riff gives it his all and Ritchie’s Doc strikes just the right tone. The standout was Angelina Thomson’s Anita. She sizzled in skirt-swinging, dance routines and claimed the stage with strong acting. A tornado of rage and grief and vocal acumen impressed in the difficult to pitch ‘A Boy Like That.’

The gangs’ dance routines had vigour with touches of brilliance and they all looked great, but where was the menace, the daring urgency which powered this trailblazer in its day? As entertainment, the production was comfortably enjoyable, a good night out, with ice-creams on sale in the interval a bonus, but, despite the valiant, gifted cast’s best efforts, the direction didn’t set the stage on fire.