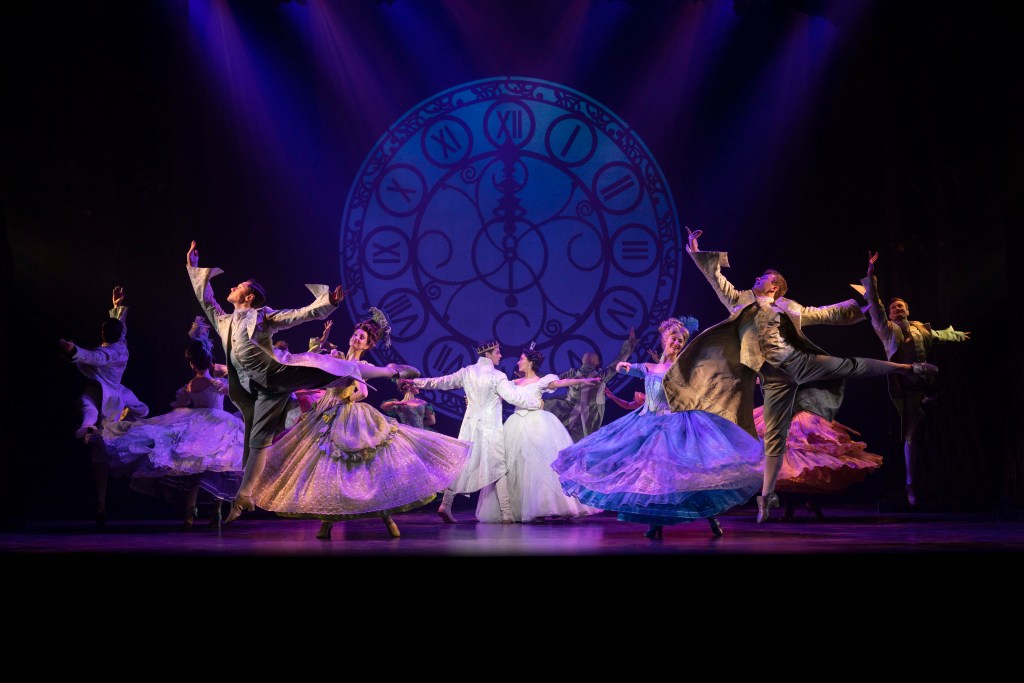 ‘It’s a glittering musical that waved its wand and created magic for all ages.’ Ainsley Melham, Shubshri Kandiah and ensemble. Photo by Ben Fon.

Sitting in Melbourne’s opulent Regent Theatre as the stage lights rose to reveal an idyllic forest scene, and the opening notes from the live orchestra swelled, audience members would have been forgiven for feeling like they’d been transplanted directly into a Disney movie.

There could surely be no finer place to stage Opera Australia’s Rodgers + Hammerstein’s Cinderella than the Regent Theatre, with its glittering chandeliers, velvet curtains and beautiful proscenium arch. It’s a venue worthy of the royal status to which our protagonist, Cinderella, aspires.

For the next two hours an eclectic audience – encompassing everyone from small children to elderly men – were held in rapturous delight at the musical. It was as if the Fairy Godmother herself had cast a spell of entrancement. It’s a tale we all know inside out, and could easily feel jaded by, but somehow this production managed to make it feel fresh and captivating.

Perhaps it was the fact this isn’t the Cinderella story we know from the Disney animated film, but instead a musical originally written expressly for television by the gifted duo, Richard Rodgers and Oscar Hammerstein (creators of mega hits like Oklahoma!, The King and I, and The Sound of Music).

In 1957 it aired on CBS, with Julie Andrews as Cinderella, and was seen by over 100 million viewers (about 60% of the US population at that time). Over the ensuing decades, some theatre versions and several television remakes were produced, but it wasn’t until 2013 that the musical we see today made its way to Broadway with new twists and turns and an injection of modernity thanks to writer Douglas Carter Beane.

The Australian cast and ensemble are impeccable, to the point where it’s difficult to justify singling out an individual for special mention – although Shubshri Kandiah as Ella just noses ahead of the rest of her co-stars for the way she manages her demanding lead role. It’s hard to recall a scene she’s not in, yet she does it all with such apparent ease.

They’re an energetic and talented bunch, featuring performers new and experienced. Ainsley Melham’s silky voice and boyish charm are perfectly suited to his role of Prince Topher, and his chemistry with Shubshri is great. Todd McKenny as Sebastian (Prince Topher’s advisor) provided plenty of laughs with his perfectly delivered lines, and the stepsisters (Charlotte played by Bianca Bruce and Gabrielle played by Matilda Moran) also get a decent slice of the humour to showcase.

Tina Bursill (as Madame) and Silvie Paladino (Marie/the Fairy Godmother) show they’re powerhouses with energy to burn as they sing, dance, act, and – in Silvie’s case – literally fly around the stage.

Visually, the show borders on being overwhelming. The costumes are elaborate, the sets are sumptuous, and the dancing and acrobatics seem non-stop. There are numerous moments that live up to the title ‘breathtaking’, such as Cinderella’s ballgown reveal, and that Marie’s transformation into the Fairy Godmother. They’re genuine ‘blink and you’ll miss it’ moments (or even don’t blink and you’ll still miss it, they’re that cleverly executed!)

The fact it was penned by Rodgers and Hammerstein definitely gives this production of Cinderella a leg-up as it harks back to the golden era of musical theatre but, most importantly, the new writing lends it themes that feel relevant to today.

This version of Cinderella still hones in on the premise of kindness, but does so by slipping in an unexpected dose of politics, with the concept of ‘every voice heard’. There’s also a hint of feminism, and the refrain of possibility and change that seemed to match the fresh and optimistic feeling currently floating around Melbourne.

The standing ovation given freely by the audience to the cast was well deserved. It’s a glittering musical that waved its wand and created magic for all ages.