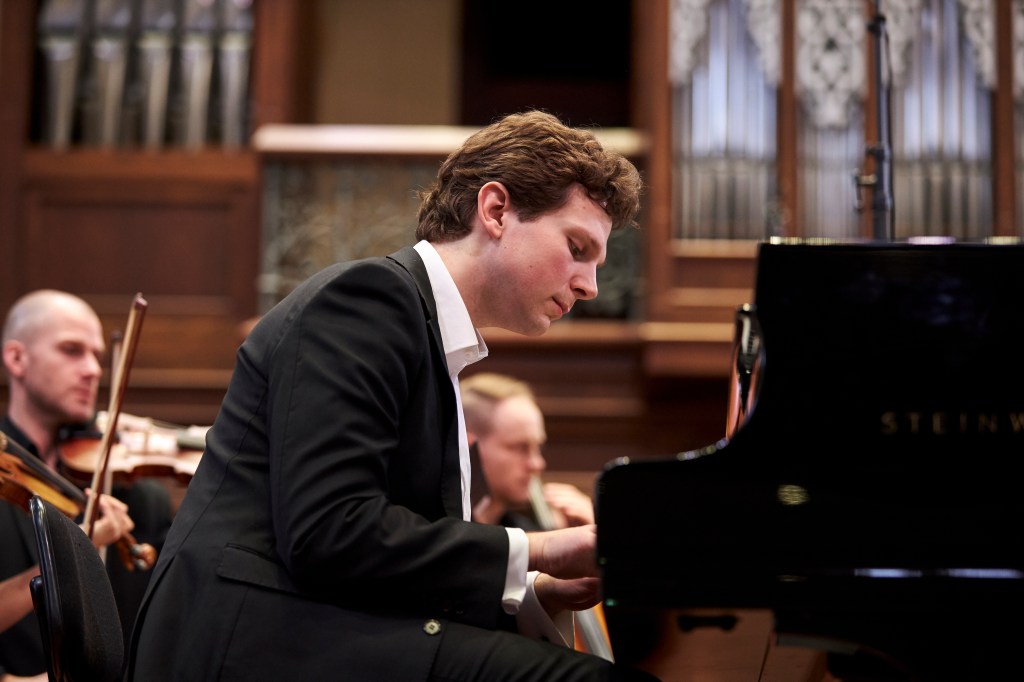 ‘Gillham is a young and relaxed soloist who plays with a fresh touch.’ Image supplied.

The Adelaide Symphony Orchestra’s Symphony Series 3 concert was simply entitled Joy, as part of their ‘perpetual emotion’ branding. And so one expected a program of celebration and upliftment, of sacred pleasures and intense (yes…) joy. But not so. The three works, between them spanning some 200 years of composition, were certainly full of emotion but perhaps somewhat short of joy.

The highlight of the concert was undeniably Mozart’s quite superb Piano Concerto No.23, played with verve and precision by soloist Jayson Gillham, who is the ASO’s Artist in Association. If joy was to be found in the program, it was here, especially in the exuberant allegro assai third movement. And the Siciliana rhythm in the second movement (literally meaning evoking Sicily) was beautifully rendered.

Gillham is a young and relaxed soloist who plays with a fresh touch. He gently mops his brow with a kerchief, kept tucked away in the piano, between each movement. The ASO, under guest conductor Dmitry Matvienko, was a perfect complement to the solo piano, although they sounded just a little too fulsome in a couple of passages. Gillham is clearly an audience favourite and their stomping applause was rewarded (on Friday evening) with a delightful encore of a Rachmaninov song, ‘How fair is this place’, making a nice segue to the Rach 2 that came after interval.

This concert was Matvienko’s Australian debut and it’s clear he is indeed a rising star in the ranks of international conductors. He has an athletic style and broad physical language with almost balletic gestures in some of the grand passages where the entire orchestra is working together. It was rather fun to see him elbow-bumping guest concertmaster Alexandra Osborne as he took to his podium. And yes, in a reminder that COVID is still with us, the players were wearing face masks (with obvious exceptions).

This is not to overlook the opening piece, a brief 5-minute work, ‘subito con forza’ by Unsuk Chin, written to mark the 250th birthday of Beethoven in 2020. Chin used Beethoven’s ‘conversation books’ as her inspiration and many of the great composer’s trademark themes and conventions can be heard in the music. There is drama aplenty here with shifting textures and strong use of the percussion section for emphasis and punctuation. It is definitely full of emotion, but perhaps not much joy. I would very much like to hear an extended version of this work because it’s clear that Chin has much to say.

And so after interval it was on to the master work, a full 60-plus minutes of Rachmaninov’s huge Symphony No.2 in E Minor. Again, this is a colourful composition full of drama, angst and torrid emotions. The program notes tell us that Rachmaninov apparently thought the Symphony was ‘repulsive’ when he wrote it, but perhaps he was just being hard on himself.

Each of the four movements has its own distinctive character, from the slow and soulful opening, full of cellos and basses, to the triumphant all-encompassing conclusion. The third adagio movement is wondrous with a superb clarinet solo, played here with great feeling by principal Dean Newcomb.

Overall, this was a satisfying performance and an engaging program, even if there was not any great outpouring of joy.