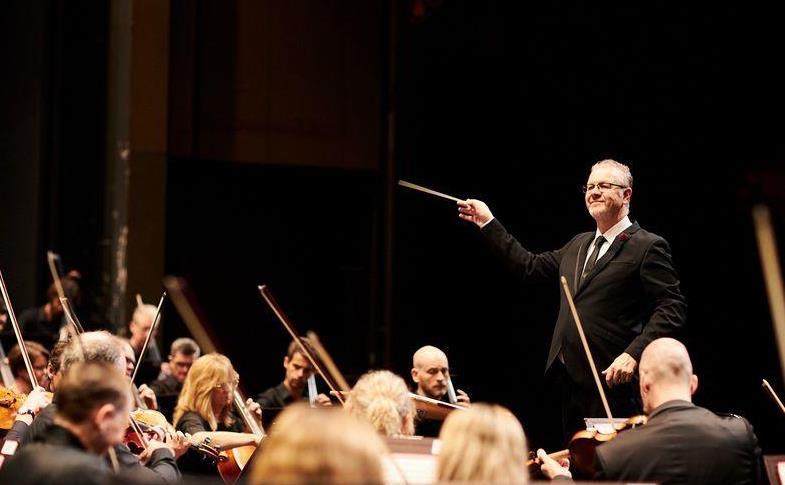 The Adelaide Symphony Orchestra’s Classics Unwrapped series has proved a hit with audiences since it was introduced in 2015. The concerts feature a number of short classical pieces that have a thematic link such as animals, food, Christmas, and now Royalty. This was a sold-out performance, and not surprising given that still means less than half a house with the chequerboard seating restrictions.

Read: Music Review: No Friend But The Mountains: a Symphonic Song Cycle

Maestro Guy Noble has always been front and centre in these concerts as conductor and presenter. He’s an affable tour guide who is very relaxed chatting with the audience but who doesn’t allow the informality to undermine the quality of the playing. Indeed, the mutual respect and affection between Noble and the musicians is clear and no doubt encourages ‘these scallywags’ to add a little sparkle to their playing.

The program opened with William Walton’s Crown Imperial, written for crowning of King George VI  in 1937, and featuring  featuring Peter Kelsall  on the magnificent Festival Theatre organ. This grand instrument doesn’t often come out to play, and has recently undergone a major refurbishment, including new bellows made from kangaroo leather. Kelsall was back on stage at the end of the concert for the final piece, Walton’s Orb and Sceptre, composed for the coronation of Queen Elizabeth II in 1953.

‘The mutual respect and affection between Noble and the musicians is clear and no doubt encourages ‘these scallywags’ to add a little sparkle to their playing.’

Handel’s The Arrival of the Queen of Sheba from the oratorio Solomon is one of those popular classical pieces you know even if you don’t know its origins. Most recently it was used as the theme tune for James Bond – alias actor Daniel Craig – to meet the Queen at Buckingham Palace in the opening of the London Olympics. It’s a great piece to hear in concert, rather on a recording, so you can really see and hear the beautiful work from the oboes.

A touch of the operatic came next with the rousing overture from Verdi’s biblical opera Nabucco which premiered in 1842.  The overture is made up of themes from throughout the full opera and ends with a dramatic flourish that sets the scene for the coming drama to unfold.

And from there it was a guided tour through some of classical music’s greatest hits, with highlights from Ralph Vaughan Williams, Stravinsky, Handel, Purcell and Strauss, until we were back with Walton and that wonderful organ. There was even of brief encore of the delightful Flight of the Bumblebee by Rimsky-Korsakov. Although originally composed as a minor theme in his opera The Tale of Tsar Saltan, this little piece has become widely known and loved through its use in film, tv, popular music, and even video games.

‘The playing from the ASO was immensely satisfying throughout and the light-hearted commentary from Guy Noble enhanced our enjoyment of the musical delights.’

Classics Unwrapped – Royalty was an unashamedly nostalgic program evoking the golden age of royalty and all the pomp and circumstance that implies. But it wasn’t all sweetness and light. The march and canzona from the achingly sorrowful Funeral Music for Queen Mary by Henry Purcell offered a few moments of reflection and introspection. Purcell himself died not long after this piece was composed, and so it was played on the occasion of his own funeral.

The playing from the ASO was immensely satisfying throughout and the light-hearted commentary from Guy Noble enhanced our enjoyment of the musical delights.