PLAYHOUSE THEATRE: Try and fit MENOPAUSE THE MUSICAL in and have a night off from Christmas parties - celebrate menopause madness!
Bronwyn Lewis
[This is archived content and may not display in the originally intended format.] 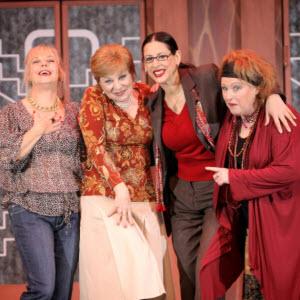 It is always tricky seeing a show twice – especially in a smaller theatre and city. I was dragged off to see the original Menopause the Musical in Melbourne with a bunch of Ararat housewives and after a pretty ordinary dinner I was dreading the show – to my delight I was immersed in a funny and very feminine experience that I could never have predicted. So I was slightly dubious when asked to review the touring production in Perth.

The 2009 Perth production was every bit as funny and in some instances more so… hilarious in fact! Try and fit it in and have a night off from Christmas parties – celebrate menopause madness!

The star of the show was Donna Lee – her biography says “born in a trunk” and certainly she had enough vaudeville style to carry off the ridiculous script. She has a pelvic thrust to die for! Laban would be ecstatic at her muscle isolation! She just had to twitch and the audience was in stitches. Not that getting the audience to laugh was an issue; as we arrived at the theatre, raucous laughter flowed from the foyer filled with patrons who had dined (and clearly wined) in anticipation of a big night!

I am afraid I am of an age where a show that finishes around 9 p.m. is perfect and like 99% of the audience can totally relate to all the major themes explored: hot flashes, memory loss, loo rushes, night sweats, difficult mothers and children!

Tightly directed by Gary Young, the cast includes Donna Lee, Maria Mercedes, Cindy Pritchard and one of the original cast; Carolyn Waddell. All were full of energy and each had their moments of connection with the audience, however Maria Mercedes seemed slightly stiff and not until she (literally) let her hair down in the last scene did she really connect. Her wonderful voice carried her and on occasions the entire cast – a hard call with a back up tape! Still the lack of live musicians did not deter the audience and like many, I purchased the CD as I left. New lyrics to old favourites like The Great Pretender, Only You, The Lion Sleeps Tonight, Stand by Your Man, and I Will Survive will ensure these songs are never the same for this menopausal dame!

The biggest disappointment for the producers is the timing – this is a perfect show for Autumn – but in the weeks leading to Christmas there is too much on for group bookings and this is social group (particularly female focussed workplaces), “dream” date.

Finally, I did feel a tad sorry for the couple of men in the audience, who were dragged on stage and Carolyn Waddell flirted outrageously with, yet the fellow next to me chuckled away while his wife raced to the stage in the final number. I wonder if he too, has the designated couch!

Bronwyn Lewis lives in Perth, and is a reviewer for ArtsHub. In a 'past life' she worked for the Sydney Theatre Company, Opera Australia, National Gallery of Victoria and was CEO of Monsalvat.