MTC presents an engaging, escapist musical but the most powerful moments in this production are the quiet ones.
Thuy On 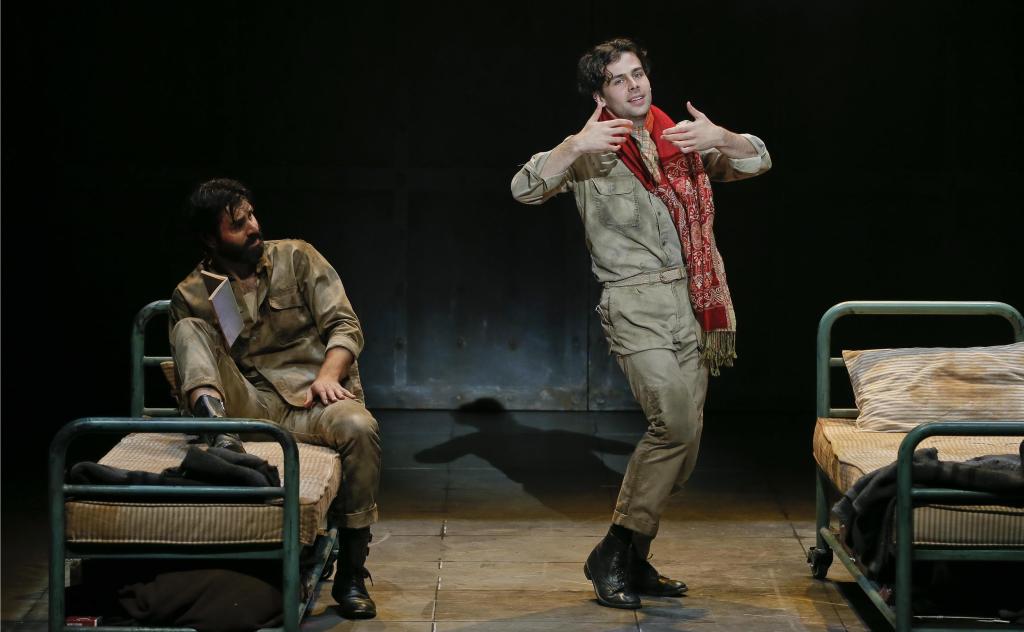 Based on Manuel Puig’s 1976 book by the same name, this musical riffs on escapist fantasy in the darkest of circumstances: Kiss of the Spider Woman is a scented letter to the stars of the golden age of cinema in the most unlikely setting. The story has been through various iterations already: from book, to film, to the Broadway show that first opened in 1993. Decades later, we have this feisty effort by Melbourne Theatre Company, directed by Dean Bryant and starring Caroline O’Connor (Aurora/Spider Woman), Ainsley Melham (Molina) and Adam-Jon Fiorentino (Valentin).

The majority of the action occurs in a South American prison (though the location is never made explicit, lending the play a timelessness and anywhere potentiality) that’s occupied by Valentin, a young Marxist revolutionary, and Molina, a window dresser who’s proudly, overtly gay. Personality-wise, they seem completely oppositional. Molina is not impressed by Valentin’s political stridency and Valentin similarly scorns his cellmate for his frivolous obsessions, for in that cold, bare jail, Molina finds comfort by indulging in a make-believe world based on the movies he adores and in particular, a glam-vamp actress called Aurora. He does his best to paint word-pictures of her movies for Valentin, and for a time both of them are able to escape the horrors of their imprisonment. A bromance of sorts eventuates between these doomed men.

But remember, this is not exactly a realist piece and soon enough song and choreography and numerous melodramatic set-pieces crowd the stage. The ensemble members play prisoners, guards and medics, and also double up in a chorus line of all-singing, all-dancing extras when required. These sudden tonal changes can be disconcerting. One moment, there’s torture and intimidation from the guards, and the next thing their helmets and batons are all a-glitter and they are prancing around in campy gleefulness. Then there’s the set itself – the two-storey prison is well designed – which comes apart, revolves, spins. The bunk beds on rollers are also spun around, there are video backdrop projections and people suspended in mid-air. There is a lot going on.

At times, the technicolour theatrics become just too much – ‘de trop’ as Molina would say. Too much frou-frou and wild costume changes and over-the-top dazzle that it strays into stylised silliness but the show is anchored by the three leads and they are all brilliant. The growing friendship and trust between Molina and Valentin is touchingly portrayed by Melham and Fiorentino – both with fine, expressive voices – and O’Connor in various guises, whether the femme formidable or fatale is, as always, a commanding presence. One of her characters is the Spider Woman, and her kiss is deadly. The title, in fact, is a clue that despite the fantasy sequences, you already know it won’t end happily for these two men.

Quibbles? The multiple false endings were a little grating and unnecessary, and overall a more pared-down production would have increased the emotional quotient; the most powerful moments were the quiet, gentle ones between Molina and Valentin as they negotiate their relationship, particularly when the former is being asked to betray his friend in order to be able to ‘go over the wall’ to spend time with his beloved ailing mother.

But on the whole, this is engaging musical theatre, with plenty to distract the eye and a good reminder of the transportive, life-enriching power of art and love.