MICF: Stand-up comedians are rarely more meta, or better, than Justin Hamilton, who farewells his festival career to date with this original, reflexive and very funny show.
Richard Watts 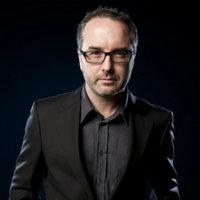 For 18 years, festivals have played a significant part in Hamilton’s life and career, during which time he’s been lauded, awarded (including both the MICF comedian’s choice award, The Piece of Wood, and The Directors’ Choice Award) and critically acclaimed. His latest show, The Goodbye Guy, sees Hamilton bowing out on a high; this is, we are informed, his last MICF show for the foreseeable future. That’s a great shame.

Thankfully for audiences, the result of Hamilton’s decision to walk away from the festival circuit while the going’s good is a damn good show – and a meta one.

The Goodbye Guy sees Hamilton – who blogs regularly at justinhamilton.com.au – decide to abandon a fictional blog, ‘Come Ride My Column’, on an equally fictitious website, The Crooked Smile, largely due to the machinations of his nemesis-cum-alter ego, commercially successful but artistically bereft comedian Jason Harrington.

While Harrington is on hand to spews banalities, the angelic Calliope (whose appearance is surely a reference to Neil Gaiman’s superlative and ground-breaking comic book, The Sandman, in which the same Muse made an important appearance; one of countless pop culture references and callbacks to Hamilton’s own, earlier works in this show) is present to offer Hamilton more sage and supportive advice. Mirroring the reflective nature of the low-key battle between the performer’s personal muse and devil, the structure of Hamilton’s show also shifts gear regularly between the playfully crass and the crafted, the manic and the thoughtful, but always with the precise, focused delivery and masterful control of mood that Hamilton is renowned for.

In a lesser performer’s hands these shifts between contemplative and comical would be jarring; here, they serve to highlight the complexity of wit and mood Hamilton is capable of delivering, while jokes about hairy babies, blackface, purple cows, and revelling in just how bad a date can become, reveal the man-child within the post-modern comedian we see on stage.