Jumaadi: My Love is in an Island Far Away, Mosman Art Gallery (NSW)

In a new direction for the artist, Jumaadi puts poetry and politics at the forefront to give agency to the object and landscape.
Gina Fairley 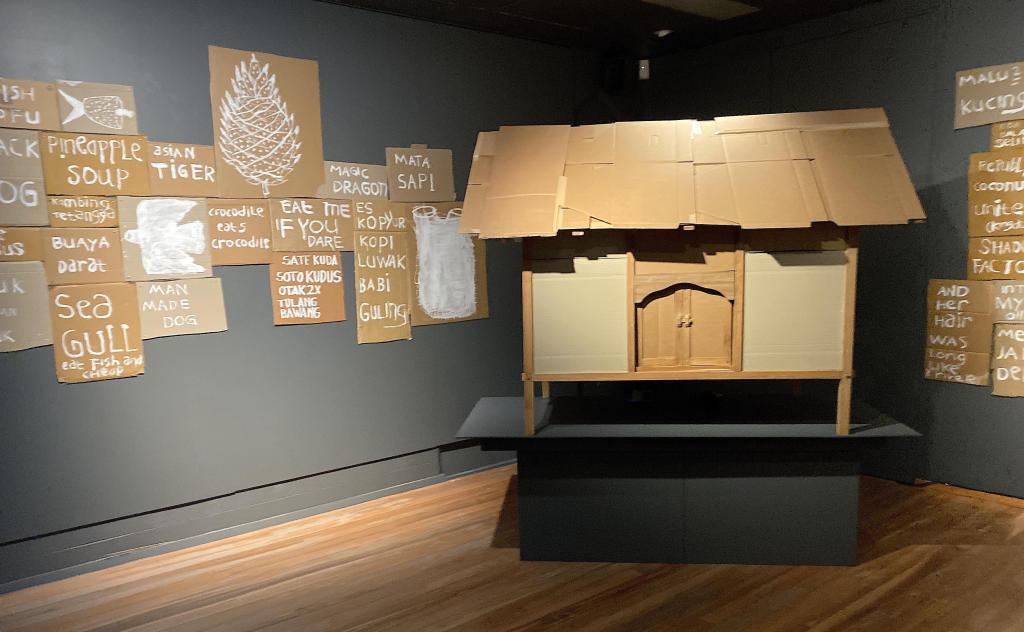 Taking its title from a poem by one of Indonesia’s most notable twentieth-century poets, Chairil Anwar, written while incarcerated in the prisoner of war camp at Cowra (NSW) in the mid 1940s, this exhibition by Jumaadi is a nuanced bridge between the past, the poetic, and contemporary questions on colonisation.

It is the largest solo exhibition to date by Java-born, Sydney-based artist Jumaadi, and the artist has risen to the occasion with an ambitious new direction in the work.

Co-curated by Mosman Art Gallery and Galeri Nasional Indonesia – where it will travel in 2020 before returning to Australia to tour regional NSW – My Love is in an Island Far Away offers a significant departure for Jumaadi, while at the same time offering a consolidation of the ideas that have underpinned his work for near two decades.

Split over two levels of the gallery with around 350 works on display, the lower space is dominated by an installation of a house-like structure – a simple bamboo armature skinned with 106 portraits representing the 1,200 Javanese detained at Cowra.

Titled The Painting Room, Jumaadi calls on the story of an interned Gamelan master who used the metal nails given to internees to build a shelter within the camp, to melt down and make into instruments – the importance of cultural heritage deemed greater for survival. 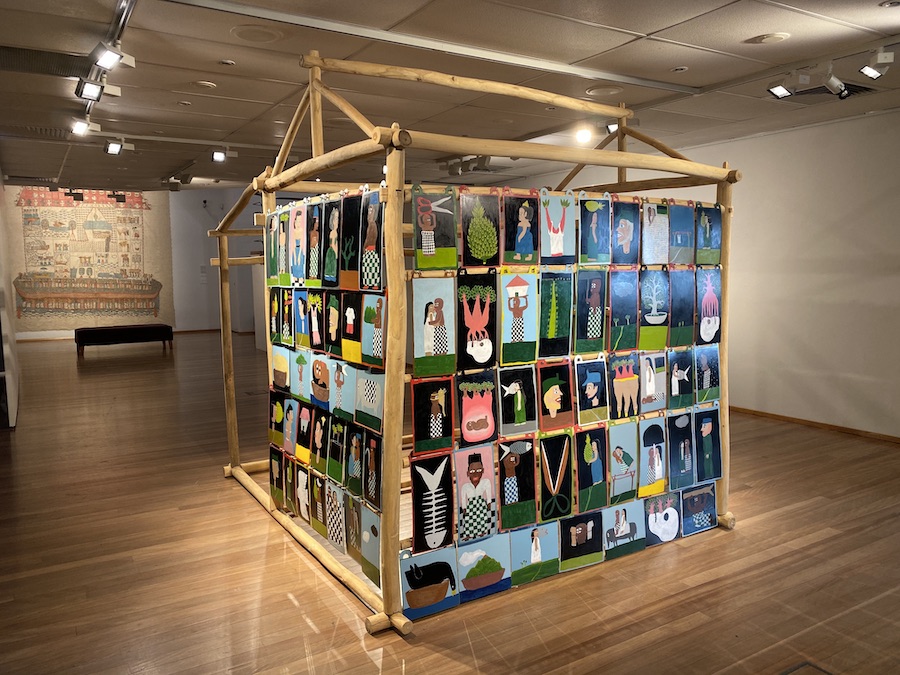 Accompanied by similar paintings on metal dotting the walls surrounding the house – Jumaadi’s Unsent Postcards series – curator Katrina Cashman describes them as ‘borrowed memories’ that raise questions of the agency of both objects themselves and the landscape as a witness to these events.

This notion of fusing memory with poetry and a sense of witness continues to the upper galleries, which move between two collections of Jumaadi’s signature contemporary wayang kulit (shadow puppet) narratives on buffalo hide, and a new suite of temple-styled works on rice cloth.

It is this new suite of works that particularly caught my eye. They confidently step forward in an exciting new direction for Jumaadi, taking their cue from ritual temple cloths – a tradition from the Kamasan region in central Bali, known for a village of artisans.

There are very few remaining artisans who make rice cloth today; this project has been over two years in the making. Over that course, Jumaadi’s own visual language has developed, moving from a paler palette in a nod to tradition, to increasingly adopting a vivid contemporary narrative that slides between the epic, the poetic and the political. 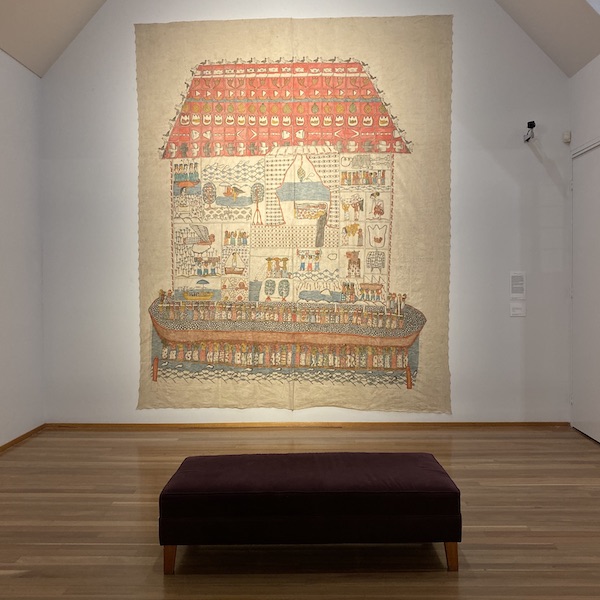 They are an easy transition from his watercolours – tableaux of the strange and the familiar in a flat, stacked perspective; oddities that push the metaphor over the message, such as a man carrying a car on his back. In a spiritual world, all is possible.

But this is more than an aesthetic shift that we are witness to. Central to this exhibition is the little-known narrative of Javanese political prisoners, who were forcibly removed from Java by the Dutch, and were eventually interned in Cowra (1943-44).

Jumaadi started researching these events in 2005, when he undertook an artist residency in the regional town, where he came across Anwar’s poem of 1947. It spoke to his own experience of diaspora and dislocation from his native home.

Cashman told ArtsHub: ‘The detainees included some of Indonesia’s most important political thinkers.’ While Jumaadi maintains that his works hold no political message, one gets the sense that this is shifting with this exhibition.

The connection to protest and a passive political voice is pushed furthest in an installation in the lower gallery, the Cube (pictured, top). The walls of a darkened space display texts on cardboard – aka placards  – that Jumaadi has both written and collected by other writers, such as Bob Dylan and Leonard Cohen, while a cardboard house with a sound element sits dramatically lit in the space. It is about finding voice, and celebrating freedom of expression.

Poetry has been the silent partner to much of Jumaadi’s work, and it is nice to see it given some visible weight in this exhibition. Our guess is that we will see more of it in his future work.

Completing this exhibition is a nicely produced video that visits Jumaadi in his Indonesian studio. A point raised by it, and the works that surround it, is that it is the start of a long overdue conversation whereby Australia recognises the independence of Indonesia. The Dutch still do not formally do so. It is a curious counterpoint to our own thorny history of colonisation and points of recognition.

The exhibition coincides with the 70th anniversary of the international recognition of Indonesian independence. It is part of Sydney Festival, where Jumaadi will present the commissioned wayang kulit performance series, Island of Shadow.